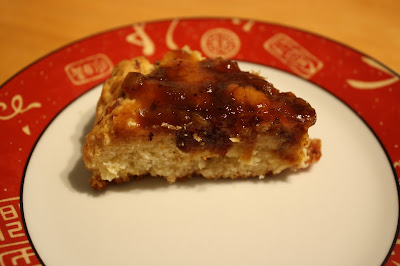 I tried another pastry recipe over the summer, pear maple turnovers with goat cheese, but I was disappointed by the result – the filling was a little dry and not sweet enough. So I figured that to make up for it, before I left Quebec, I’d at least have to make something good with the President’s Choice bacon marmalade that was sitting in the fridge, barely touched. You see, when I bought it, I thought it was regular bacon jam, sort of like this one, but no! It’s actually marmalade, with oranges, even though the label doesn’t specify that. (The ingredient list does have oranges, obviously, but all I read was “Rich with caramelized flavours of bacon and sautéed onions, authentic balsamic vinegar of Modena, and a delicate hint of spices, this tantalizing savoury-sweet spread is a sensory experience to behold.” So I really thought it was bacon jam.). And despite what President’s Choice thinks, I find that the citrus taste does not marry well with this bacon, so none of its suggested uses appealed to me, and neither did those of bacon jam. So the marmalade just sat on a shelf in the fridge, but I didn’t want to waste it.

When life gives you lemons, make… marmalade. Or use the marmalade to make scones. Or something like that. See, I remembered that I had a recipe for bacon date scones with orange marmalade glaze that I never got around to making. Serendipitously, it also called for cream, and so far it’s only sold lactose-free north of the border, so it really was the perfect time to make those scones! I simply mixed all the bacon and dates into the dough (instead of saving some for the topping), and used my marmalade instead of regular orange marmalade. It turns out these scones were delicious!

For the glaze
½ cup orange marmalade (or bacon marmalade!)

In small bowl, stir together bacon, dates and nuts (if using). Stir 1 cup of bacon mixture into flour mixture; set remaining bacon mixture aside (see note above – if using bacon marmalade, I recommend just mixing all the bacon into the dough).

Place balls about 3 ½ inches apart on cookie sheet; pat each into 8-inch round. Using knife dipped in flour, cut each round into 8 wedges; do not separate. Sprinkle top of each round with remaining bacon mixture. Press mixture into dough.

Bake 14 to 16 minutes or until edges are light golden brown.

In small microwavable bowl, microwave the glaze for 20 to 30 seconds or until melted, stirring until smooth. Spread glaze evenly over the 2 rounds. Carefully separate into 16 wedges. Serve warm. 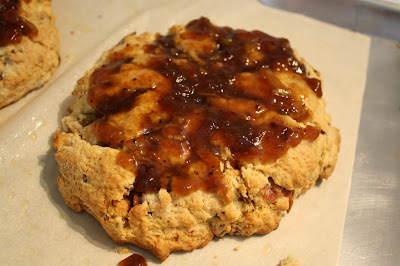 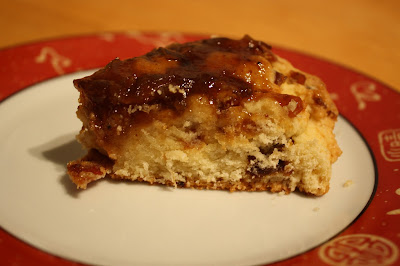