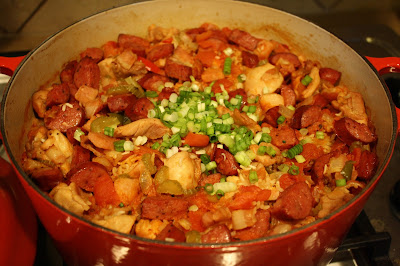 I had a recipe in my folder from the March 2011 issue of Bon Appétit; it had been in my folder for over 4 years. I would eye it every once in a while and I would always chicken out, either because it seemed like too big a project or because it fed an army (10 to 12 people) and I was intimidated. It turns out that breaking up the cooking in a prep phase (I spent all of the Little Prince’s nap time chopping and doing mise en place so that things would go smoothly when I was ready to cook.) and an active cook phase, plus a hands-off bake phase to end, made it easier for me. Plus, I decided to freeze leftovers, so both problems were solved. I’m really glad I took the plunge, too, because this was the most requested dish for a while (the Little Prince asked for “jambaya” for many days afterwards), and the Engineer keeps asking me when I’m pulling the leftovers out of the freezer!

The version below is mine, and the main change is that I made it mild (I served it with Cholula on the side for the Engineer, but the Little Prince and I loved ours just as is). I couldn’t find andouille sausage, so I just increased the amount of smoked sausage instead (mine was a local beef sausage that was fantastic on its own and really enhanced the overall flavors of the jambalaya). At one point, it seemed like every animal in creation was in that Dutch oven! It just looked like a bit pot of meat. Then I dumped the rice in there, mixed it in and put the whole thing in the oven for the last 45 minutes. When I took it out, bam! It was a pot of rice with meat in it. And again, it was delicious and a big hit with all members of the household.

Position rack in bottom third of oven and preheat to 350 °F.

Cook bacon in very large pot over medium-high heat until brown but not yet crisp, stirring often, 8 to 10 minutes. Add smoked sausage, andouille, and tasso. Sauté until meats start to brown in spots, about 10 minutes. Add onions, celery, and bell peppers. Cook until vegetables begin to soften, stirring occasionally, 10 to 12 minutes. Mix in chicken. Cook until outside of chicken turns white, stirring often, 5 to 6 minutes. Mix in paprika, thyme, and Korean pepper. Cook 1 minute. Add diced tomatoes and broth; stir to blend well. Mix in rice.

Bring jambalaya to boil. Cover pot. Place in oven and bake until rice is tender and liquids are absorbed, 45 to 48 minutes. Uncover pot. Mix chopped green onions into jambalaya; sprinkle jambalaya with chopped parsley and serve. 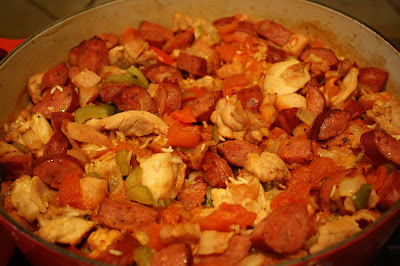 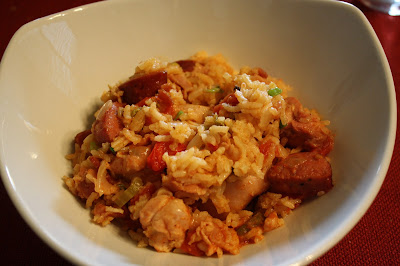 I love your blog, I always learn something. Now I know what tasso ham is!