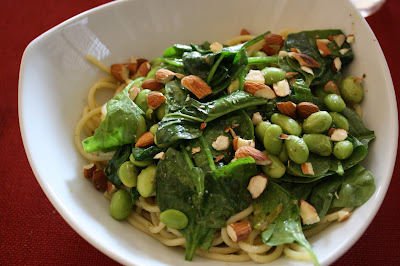 This meatless dish was just what the doctor ordered after a week of eating on the road! It’s great for summer, and satisfying without being heavy. It has a lot of brightness, thanks to the lemon, and the edamame makes it toothsome more substantial than plain pasta. As a matter of fact, this was the dish that made the Little Prince decide that he likes edamame – he even went so far as to refuse a forkful that I offered because it did *not* have edamame on it! This dish was a hit with all three if us. The main thing I would change is that I would use short pasta instead of the spaghetti of the original recipe, because I had trouble mixing the long strands of pasta with the other ingredients, and then it was very hard to get a single bite of food that had a bit of everything in it. I doubled the amount of pasta, which is what I’m writing below, but left the amounts of other ingredients as they were, and it was just fine for our taste. (Honestly, it’s pasta, not precision surgery.)

16 oz. pasta (ideally short pasta – see note above; gluten-free if necessary)
½ cup pesto, store-bought or homemade
8 oz. baby spinach (I only had 5 oz.)
2 cups edamame (shelled and shucked; I used 16 oz. frozen edamame beans)
juice from 2 lemons (plus fresh lemon wedges for serving)
¾ cup almonds, crushed and lightly toasted (I would only use ½ cup next time)

Heat a large pot of water to boiling, and cook pasta until al dente. Strain.

In a large bowl, combine the pasta, pesto, and spinach, and stir until evenly mixed (some spinach will wilt, some will stay firm — this is a nice contrast of textures). Finally, stir in the edamame and squeeze the lemon all over the finished dish. Reserve a few lemon slices for people to add more if they like. Garnish pasta with the toasted almonds.
Posted by Amélie at 6:45 PM