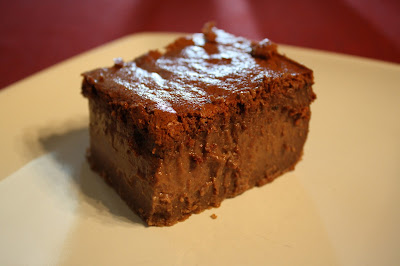 If you’ve been reading this blog a long time, you may remember what I call “impossible tart”, after a favorite recipe of my mother’s. I tried a pumpkin version, though my favorite was always the coconut one. The basic principle is that you mix all the ingredients and end up with a very liquid batter which, in the oven, stratifies to makes something reminiscent of clafoutis, with a bottom “crust” made up of flour and an unctuous filling in the middle, sometimes with a crisp topping. It’s a great dessert, satisfying and usually not too sweet. So, enter the White on Rice Couple with their magic chocolate custard cake, a much thicker version in which the middle layer is like custard while the top layer is cakier than in the iterations with which I’m familiar. This was absolutely fantastic and won rave reviews from the Engineer and the Little Prince! I’ll have to try the “plain” version of this cake at some point, too, but for today, chocolate it is. If you’ve never tried this type of dessert, this recipe is a great place to start!

Melt the margarine and set aside to slightly cool. Warm the milk to lukewarm and set aside. (It is important to have both at close to room temperature when they are mixed with the other ingredients.)

In a medium bowl, whisk together the flour and cocoa powder. Set aside.

Whip the egg whites with vinegar to stiff peaks. Set aside.

Gently fold in 1/3 of the egg whites; repeat with the rest of the egg whites until they are all folded in. (For the record: at this point, my “batter” was remarkably soupy, and I was convinced this would be a monumental failure. This seems to actually be entirely normal, though, so don’t panic.)

Pour the batter into the prepared pan and bake for 50-60 minutes or until when you gently shake the cake, it is slightly jiggly but is no longer runny-jiggly.

Allow cake to completely cool before cutting and then dust with confectioners’ sugar (if using). 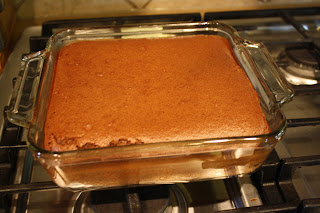 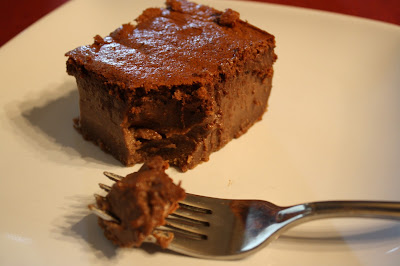