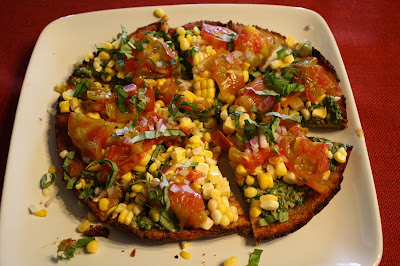 This pizza is unlike any I’ve had before. It’s gluten-free and vegan, but instead of calling for gluten-free flour to make dough, it’s actually quinoa that’s been soaked in water and processed (and it should go without saying, but obviously, don’t skip the step of soaking the quinoa, or else this definitely will not work). The result is not like regular pizza crust, obviously, but it holds its own – it’s solid enough that you can pick up a piece and eat it straight up, it’s slightly chewy, and it’s filling. It’s also very easy to make! Since corn and tomatoes were both in season (and still are, in many places), it was the perfect season for this. The Little Prince and I had this for lunch, and we actually ended up making two lunches out of this; we both enjoyed it very much. I rewrote some of the instructions to be clearer to follow, but let me know if anything isn’t clear.

Preheat the oven to 450 °F. Spread the olive oil or coconut oil in a 9-inch round cake pan and place the pan in the oven while it is heating up.

In a high-speed blender or food processor, blend together the rinsed quinoa, ¼ cup water, sea salt, garlic and seasonings until smooth. The “dough” should be thick but pourable, somewhat like pancake batter; add water if needed (perhaps my dough would have been smoother if I had used the Vitamix instead of the food processor, but it came out alright anyway).

Remove the heated cake pan from the oven and pour the “dough” into the pan, using a spatula to spread it evenly out to the sides. Place the pan in the oven, along with the ear of corn, and bake for 20 minutes. (I put my ear of corn in the oven as is, husk and all, directly on the rack, but if yours is shucked, you can wrap it in foil.)

Meanwhile, line a baking sheet with parchment paper. Place the tomatoes on it, sprinkle with salt and pepper to taste, and set aside.

In the food processor (rinsed or wiped clean), blend together the basil, walnuts, garlic, salt, nutritional yeast and lemon juice until it forms a coarse meal, scraping down the sides as necessary. While the motor is running, add the olive oil in a slow stream. Taste and adjust seasonings to your liking.

After 20 minutes, remove the dough and corn from the oven. Flip the dough over in the pan (this was surprisingly easy, though I did use a spatula to tease the edges away from the pan slowly). Put the dough back in the oven for 10 minutes along with the tomatoes, until the dough’s edges are brown and crisp and the dough has baked all the way through.

Once everything has been removed from the oven, the corn should be cool enough to handle, so you can shuck it and strip the kernels off the cob (I like doing this by propping the corn up in the center of a bundt pan and using a serrated knife to cut off the kernels – they will fall in the pan instead of flying off every which way on your countertops).

Now that the dough has cooled a bit, you can take it out of the pan and put it onto a plate or serving board. Spread the pesto on top of the dough and top with corn, tomatoes, red onion, basil, and salt and pepper to taste. Enjoy! 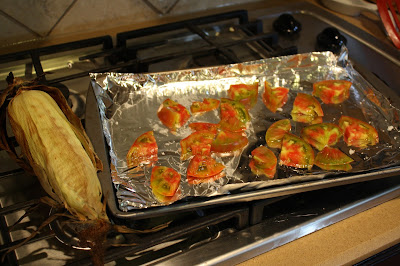 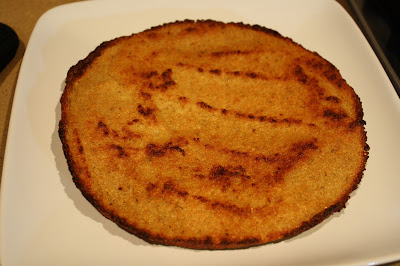 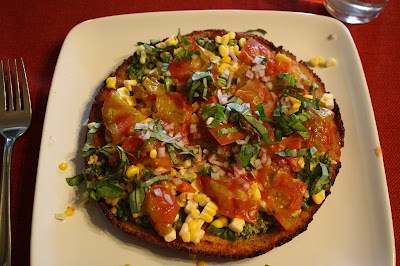 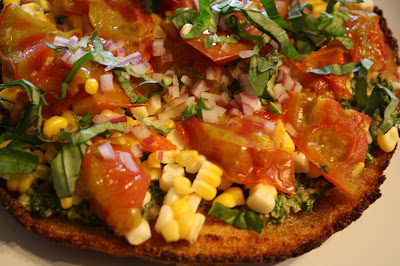