Now that the Little Prince eats lunch like a real person (as opposed to even a year ago), I’ve been making something or other each week when we run out of leftovers. I tried sesame spring rolls with tahini coconut dip, which called for baking tofu rolled in sesame seeds. I liked the spring rolls, but the Little Prince did not. He did, however, LOVE the leftover strips of tofu and would have happily eaten the whole batch if I hadn’t made the rolls! (We both loved the dipping sauce, too, and that’s one I’d trot out for other recipes or perhaps with appetizers.) I still had some of my block of tofu left in the fridge, though, and I was looking for a way to use it up, so I made Lemony Eggless Salad from The Kitchn (I halved the recipe). I chopped the tofu instead of crumbling it, though I realize it would have looked more like egg salad if I had followed directions. Then again, I wasn’t trying to fool anyone; I told my son it was tofu on toast, and that’s what he ate with gusto! (Obviously I started ahead of the game because my kid actually likes tofu.) This would work well in a sandwich, too, perhaps with some lettuce. The lemon really brightened it up, but I think I would dial it down next time. It’s served here with a side of Delancey’s tomato and fresh corn salad with shallot vinaigrette.

For the salad
1 20-oz. block extra-firm tofu
¼ cup slivered almonds (optional)
4 tsp. capers (I omitted them)
¼ cup chopped chives
fresh thyme, to taste (I used lemon thyme, which may have been too lemony)
salt and pepper to taste

In a large bowl, whisk together all the dressing ingredients. Using your hands, crumble the tofu into roughly ½-inch pieces. Stir together with dressing and add almonds, capers, chives, and thyme. Lastly, salt and pepper to taste. Serve on sandwich bread or rolls or with salad greens. (Leftover salad will keep refrigerated for several days.) 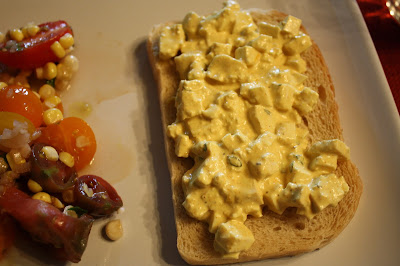 After that, I tried a veganized version of tuna salad. I had two recipes bookmarked, one from The Kind Life and one from The Kitchn. After comparing ingredients and deciding that I wasn’t too keen on pickles or nori, while celery, scallions and mustard were more my thing, I went with The Kitchn and their recipe called Chickpea of the Sea Salad. You can’t beat that name, and honestly, you can’t beat that salad! It’s like it was pushing all the buttons that tuna salad normally pushes for me, but it doesn’t have tuna. And you know, lots of people want to avoid tuna – maybe they have allergies, they’re vegan, they’re concerned about sustainability or mercury exposure. This salad is your answer, people. I loved it, the Little Prince loved it (actually, he called it tofu, which we’ve established is a compliment coming from him), and when the Engineer had a bite later that evening, he was flabbergasted that it tasted like it did but without containing any tuna or chicken or any animal flesh at all. I’ll be making this one again. 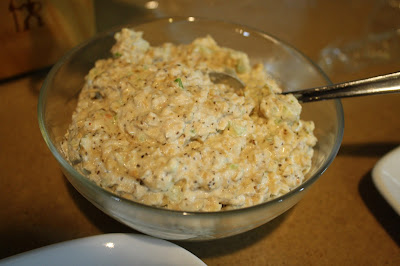 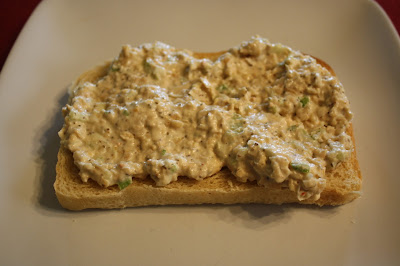