When it’s the Engineer’s birthday, he gets to choose what cake I make. (And stop me if I told you this story before.) At first, he wasn’t sure what to ask for, perhaps because he wasn’t exactly used to having someone make him a cake on his birthday. But now, he’s getting very precise with his wishes! I thought he would say things like, “I want a chocolate cake” or “I want something with vanilla frosting,” but he’s upped the ante. And even though I always have a little moment of panic when I hear his request (“Do I even have a recipe for a pineapple cake that isn’t the upside-down kind?”), I find something to make and it all works out. This year he wanted a peanut butter cake, ideally (but not necessarily) with chocolate frosting. I had no such recipe up my sleeve, but after some googling, I found one on The Daring Gourmet, where the blogger calls it the Killer Peanut Butter Cake not just for its taste, but also for its artery-blocking properties. Perfect for a birthday! :)

I modified the frosting a bit by replacing the cream with coconut milk, but I would just use lactose-free milk next time, because my frosting has an unpleasant texture. Then again, the peanut butter in the frosting makes it unusual to begin with. The cake, however, was delicious, and just what the Engineer wanted. I’ll definitely keep that recipe, but for the frosting, either I’ll try with milk or I’ll use another recipe. I only modified the cake itself to make it in two regular 9-inch pans instead of one tall 9-inch pan, because I am often unable to cut a cake in two layers as well as I would like, especially with recipes I’ve never tried before. So I reduced my baking time, and that’s what I wrote below. (Note that the original recipe says that you could bake this cake in a 9”x13” pan and halve the amount of frosting, and/or add Nutella to the frosting.) I also reordered some of the ingredients to make the recipe easier to work with. I very much recommend this if you’re looking for a peanut butter cake! It was a big hit with us.

In a medium bowl, sift the flour, baking powder, baking soda and salt. Set aside.

In a large mixing bowl, add the brown sugar, oil and peanut butter. Beat until combined and creamy. Add the eggs and vanilla extract and beat just until combined.

Alternately add the flour and buttermilk to the wet mixture, beating just until combined. Be careful not to over-beat or the cake will be dense and dry. A few small lumps of flour are fine.

Pour batter into the prepared pan. Bake for about 15-20 minutes or until a toothpick inserted into the middle of the cake comes out moist (not wet with batter but moist – if the toothpick is dry, the cake is over-baked and will be dry).

Let the cake sit in the pan for at least 5 minutes, then invert the cake onto a wire rack to cool completely.

In the meantime, to make the frosting, place the peanut butter and butter in a large mixing bowl. Beat until smooth and creamy. Add the cocoa, then the powdered sugar one cup at a time, continuing to beat. Add the milk until you reach a spreadable consistency. (Note that this is a fairly stiff frosting.) 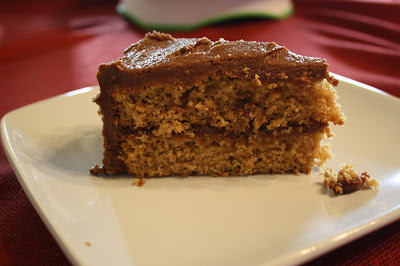 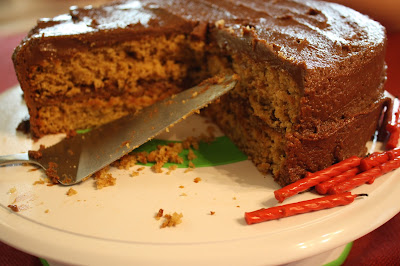 [Update, 2016/05/13: I just now made this cake again, at the Engineer’s request. For the frosting, I used 2 cups of powdered sugar and 3 tablespoons of lactose-free milk, and it was great! Delicious, great texture. I highly recommend it!]
Posted by Amélie at 4:49 PM