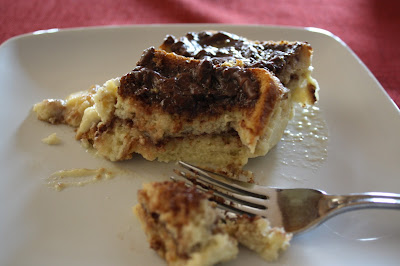 I know I already made Nutella bread pudding this summer, but that was with croissants (!), and I had Nutella left from making that second batch of Nutella puddings. I was looking at Alice Medrich’s Pure Dessert, thumbing through the pages on which I had stuck little post-it notes (that book is like a bouquet of post-its, really). And there it was: Nutella bread pudding (which she also shared on Chowhound, hence the link and reproduction of the recipe here). And this was really perfect timing, because Ms. Medrich recommends bread such as Oroweat*, and I actually had half a loaf of it going stale in the fridge. (This is what I rationalized to the Engineer: I had to use up the loaf, and the recipe called for it, so more Nutella bread pudding it was!)

I adapted the recipe to make it lactose-free. The Engineer said, “This is delicious. I heartily endorse this.” I loved it as well! And the Little Prince is A-OK with anything that is dessert and/or chocolate, so this hit all the right buttons for him as well. It did not turn out nearly as photogenic as the author’s, but that’s fine, as bread pudding has always been a bit homely to begin with. Note that you can use any brand of chocolate spread, and feel free to branch out with something like salted caramel hazelnut spread (which I used on 2 of the 6 slices of bread).

[*So I’m looking at the recipe again, and for the life of me, I can’t find where she mentions Oroweat. I googled her name and that brand name, and what comes up is her salted caramel banana bread pudding, in which she says what I could swear I read in the Nutella recipe: “thin slices slightly stale or very lightly toasted firm white sandwich bread (such as Pepperidge Farm or Oroweat/Arnold’s Country Buttermilk or Country Potato Bread)”. I have no explanation for the mix-up, but Oroweat is what I used.]

enough ¼-inch slices of home-style or bakery white bread or baguette, with or without the crusts, to cover the bottom of an 8-inch square baking dish, not too tightly, with 2 layers of bread
¼ to 1/3 cup Nutella
5 large eggs
½ cup sugar
1 pinch salt
1 ¼ cups lactose-free milk (I would use just 1 cup next time)
1 ¼ cups coconut milk

Position a rack in the lower third of the oven. Preheat the oven to 325 °F. Put the bread in the bottom of the baking dish to make sure you have sliced enough to make two layers.

Remove the bread from the dish. If the bread is fresh, lay slices on a baking sheet and bake for 5 minutes on each side, or until very lightly toasted. Let the slices cool.

Spread one side of each slice of bread with Nutella. Cut or break large whole slices (not baguette slices) into 4 pieces each. Arrange the bread, Nutella side facing up, in the baking dish in one layer of overlapping pieces, with rounded crusts or trimmed angles showing attractively.

In a medium bowl, whisk the eggs, sugar, and salt together. Gradually whisk in the milk and coconut milk. Pour the egg mixture through a strainer into the baking dish. Cover the pudding with plastic wrap and press any floating bread pieces back into the egg mixture. Let stand for at least 15 minutes to allow the bread to absorb the liquid.

Put a kettle of water on to boil.

Uncover the pudding and place it in a baking pan large enough to hold it with a little space on all sides, and then into the oven. Pull the oven rack out and carefully pour enough boiling water into the large pan to come halfway up the sides of the baking dish. Bake until a knife inserted into the pudding comes out free of custard (or with a little Nutella clinging to it), 50 to 55 minutes. Cool for at least 1 hour.

Serve the pudding warm or at room temperature. Cold leftover pudding is divine, but you could also reheat it in the microwave on medium power for a few seconds. 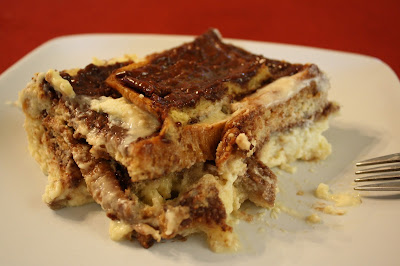