I found this recipe on The Kitchn somewhat by accident. I had seen the post the day that it went up, but it’s only upon reading someone talk about the recipe later that week that I decided it looked good enough to make. I’m not sure why I had dismissed it the first time, but I’m very happy that I took a second look – it was SO GOOD! The sauce was rich, but the tahini prevented it from being too decadent while also adding some unexpected brightness with the lemon. I didn’t have nigella seeds (still, I know; I’ll just buy them next time I see them so that I can make stuff like this on a whim). I used black sesame seeds instead, for a little visual interest. I had a bit too much of the seed mixture, so I might make slightly less next time. I increased the amount of pasta to 16 ounces, and I used a red bell pepper instead of chile peppers (which is what I’m writing below).

Bring a large pot of water to a rolling boil. Add salt as you see fit and then the pasta, stirring a few times. Return to a boil and cook at a gentle boil until the pasta is al dente, according to the package directions. When it is almost ready, dip a heatproof measuring cup into the pasta pot to reserve ¾ cup cooking liquid.

While the water is coming to a boil, add the sesame, cumin, and nigella seeds to a medium skillet over medium heat. Toast, stirring frequently, until the seeds turn fragrant and the sesame turns golden, 3 to 5 minutes. Immediately scrape the seeds onto a plate and set aside.

Finely chop a quarter of the bell pepper (i.e., half of what the recipe calls for) and set aside. Add the remaining bell pepper and the garlic to the bowl of a food processor, fitted with the metal blade. Process until minced, scraping down the sides as needed. Add the yogurt and sour cream and blend until creamy. Add the tahini, lemon juice, and salt and process until smooth. (At this point, the recipe called for warming the sauce in a skillet for a few minutes, but I was afraid of curdling the dairy, so I skipped this step. I found that the sauce got plenty warm enough simply from the residual heat of the pasta in the last step.)

Set in plates, sprinkle with the reserved seed mixture, the finely chopped bell pepper and the parsley. Serve at once. 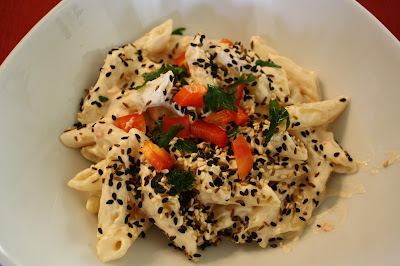