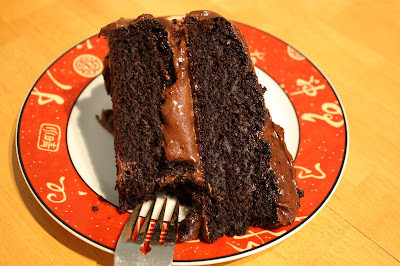 I ended up making cupcakes and then a cake for the Little Prince’s birthday, for two of the three celebrations. I’ll talk about the cake in a moment, but first, I wanted to show you the Cookie Monster cupcakes that I made with my friend Jen. I had seen them online (probably on Cakewrecks’ Sunday Sweets years ago) and I’d been wanting to make them, but I was really intimidated. Jen, however, had made Sesame Street character cupcakes before, and she basically taught me everything I know about piping frosting, so when she offered to help, I took her up on it. I made a dozen chocolate cupcakes (with this delicious vegan recipe) for the base, and we made frosting based on this recipe but using vegan margarine instead of the shortening and butter, along with blue gel coloring (it’s important to use gel instead of liquid here to get a nice shade of blue without liquefying the frosting). I used a Wilton 233 decorating tip, but a 234 would work as well (it’s the same design, but slightly thicker). I had tried a small batch recipe for chocolate chip cookies, which was originally for microwave cookies, but even after baking them in the oven, it was a complete failure. (The Engineer aptly said that they looked like someone had seen a drawing of chocolate chip cookies somewhere and had set out to recreate that, except that they were all spread-out and cake-like and wrong.) So I used Chips Ahoy cookies instead, and I’m glad I did, because you do need smallish, uniform, hard cookies for this decoration (the cookies will soften by the time you eat them). It doesn’t matter that they’re not the best-tasting cookies, because that’s not the point of these cupcakes. I also bought a package of Wilton’s large candy eyeballs which, for the record, taste like the Popeye cigarette candies that we used to eat in the 1980s. Pro tip: only put the eyes on the cupcakes right before serving, because otherwise they will start to bleed within a few hours (the black of the pupil oozes onto the white), and no one wants to see Cookie Monster strung out like that. In any case, I’m really happy with how they turned out! 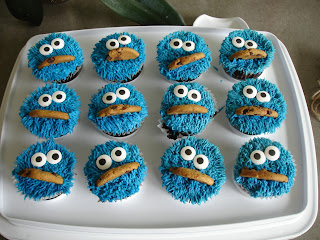 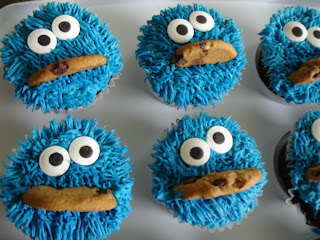 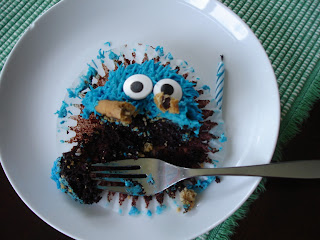 As for the cake, I knew it had to be chocolate, because that’s what the Little Prince asks for all the time: “Chokit cake?” (He takes after me – just wait until I make him red velvet cake someday.) I looked through my recipes-to-make folder and noticed two that were similar: this one from Sweet Heart, Strong Heart (frosting here), and that one from Minimalist Baker. Because the Minimalist Baker recipe seemed a little easier and called for products I could get easily (as opposed to Earth Balance coconut spread), I went with that one, and I’m glad I did. Minimalist Baker is a blog that has never steered me wrong; I think I’ve loved every recipe I’ve tried from there, and the ones I’ve bookmarked look fantastic. In this case, the chocolate cake was so good that – dare I say it? – I think it’s going to be my new go-to recipe. It is absolutely delicious, with a dense, moist and flavorful crumb, and lactose-free frosting that has the perfect consistency without being overly sweet, as it uses some cocoa powder along with the confectioners’ sugar. The frosting was almost like mousse, really, and I will confess to eating leftovers by the spoonful! Needless to say this was a hit with the Little Prince as well. If it’s very hot out, you can store this cake in the fridge, otherwise the frosting will melt a bit – but in that case, leave the cake on the counter for a bit before eating it. 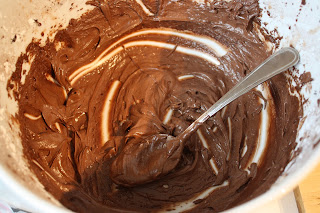 Preheat oven to 350 °F and lightly spray 2 8”-round cake pans or one large rectangular pan with nonstick spray (I used 9”-round pans with no problem). Dust with cocoa powder, shake out the excess and set aside.

In a medium bowl, put the flour, sugar, cocoa powder, baking soda, baking powder, and salt and whisk together. Set aside.

Mix the milk and vinegar in a large mixing bowl, and let set for a few minutes to activate. Add the applesauce, coffee, oil, and vanilla extract and beat until foamy.

Using a wooden spoon, mix the dry ingredients into the wet ones until no large lumps remain. The batter will be creamy and pourable.

Divide batter evenly between your 2 cake pans or rectangular pan. Bake 25-30 minutes, or until a toothpick inserted into the center comes out clean. Let cool completely before frosting.

Once the cake has cooled, prepare frosting by beating together all ingredients until light and fluffy, adding the powdered sugar in small amounts until you reach your desired consistency and sweetness. If it becomes too thick, add more milk. If it's too thin, add more cocoa powder or powdered sugar. 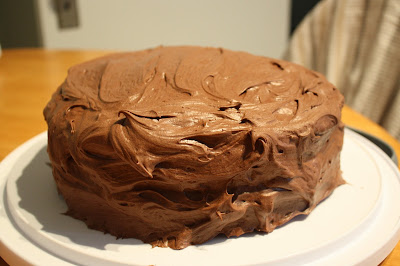 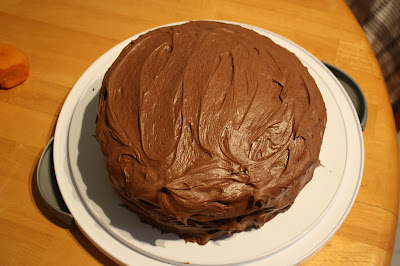 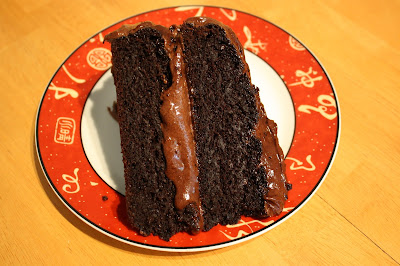