Phew! Just in time! I put up a bunch of posts on which I’d been working, before taking a break for the holidays, and this is the last one.

So, after the Little Prince was born, I finished this kimono. While the pattern was simple (simple enough to complete in the months when I had a newborn!), this was an exercise in frustration because of the yarn. I used Crystal Palace Mini Mochi Yarn in Jenny Lake color, which is a beautiful variegated yarn with many shades of blue. Sadly, though, it’s a single ply, and so uneven that I was literally unable to knit more than 20 stitches without having it break, even when I loosened my gauge and was as gentle as possible. So I doubled it up and used 4 skeins instead of 2, resulting in a thicker fabric. Plus, it turns out that while the bottom of the kimono is knit in one piece from side to side, everything from the armholes up is separate (right front, back, left front, sleeves), and so the variegation pattern really didn’t work out that well. But I’m sure it’ll come in handy with the cold weather over the holidays… 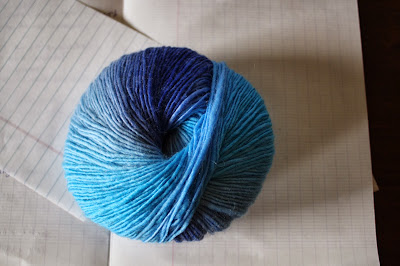 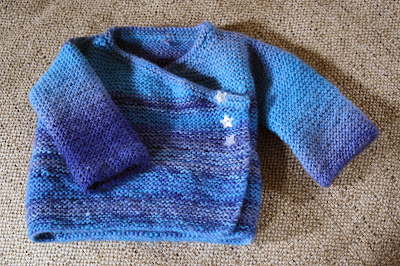 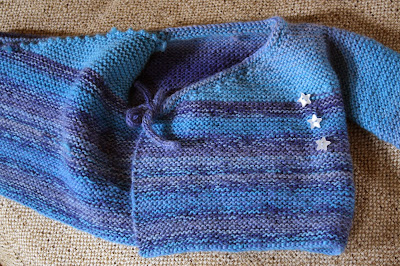 The shirt I’m most proud of, though, is the Little Prince’s Christmas outfit. I cut it close with this one, finishing only this week! I found the pattern on French Press Knits, via Pinterest (Ravelry link here). It’s actually a pattern from Dale of Norway, in issue #208 (Traditional Designs for Baby). I couldn’t actually find it on their website, but once I contacted them, they directed me to the right place (the link doesn’t work anymore, but you could always try your luck with customer service). I even got the recommended yarn, in barn red and white, and bought the smallest needles I’ve ever worked with, size 2 mm (US 0). So the small gauge took a while, as did the design: it was my first time working with two colors in a pattern other than stripes! I learned that the difference between Norwegian designs and Fair Isle is that in Norwegian designs, the pattern is centered on the front and may not repeat perfectly the entire way around. This wasn’t an issue for the size that I knit (12 months), because the sides of the body, where the patterns from the front and back met, were just a few stitches of white; on the sleeves, it looks like one of the patterns has been amputated (at least, it’s symmetrical!), but it’s on the underside and won’t show much, so it really isn’t an issue. 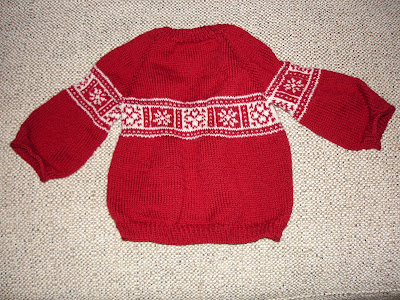 While the body came out really well, I think I pulled on the yarn a bit too much for the sleeves while knitting in the round, as the pattern was tighter than the rest. So I washed the garment and reshaped the sleeves a bit, and it doesn’t really show anymore, but I’ll be more careful next time. For the back of the neck, I used one button (from my stash) at the top; there’s a little gaping, but I don’t mind it. I didn’t have enough buttons on hand to sew in 3 or 4, and no time to go shopping for them, so I’m fine with the compromise. I also decided to make a shirt instead of a onesie, just because I don’t want to have to clean poop off of this! For the shirt in size 12 months, I used 2 skeins of red yarn, with only about 6 inches left at the end (like a boss!). I do have a third skein that I’ll use to make ornaments for next year’s tree (I’ve got the patterns already, just not the time). This is also the first time I get a real live boy to model my knitting, and it’s pretty awesome to actually see it worn! I’m including the picture where he moved his head and made it look like he’s in the witness protection program. 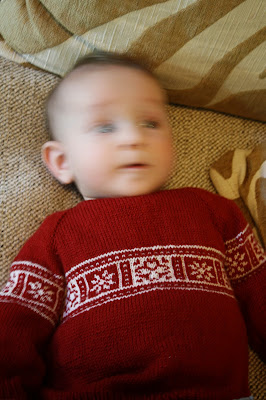 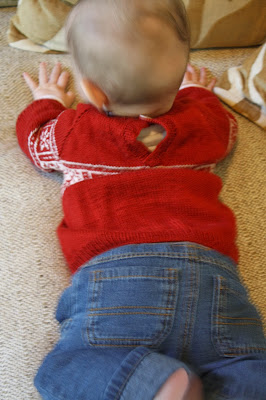 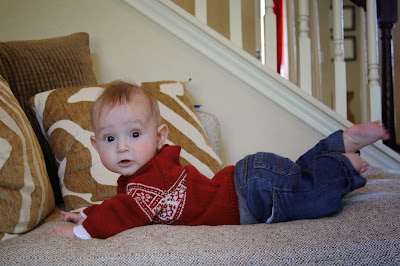 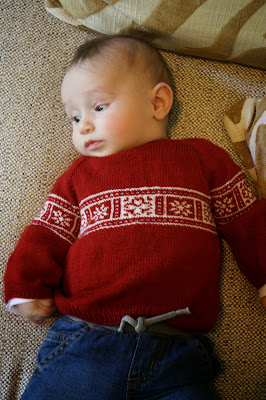 I also sewed a Christmas stocking for the Little Prince. What with all the sewing and knitting patterns out there, I couldn’t bring myself to buy one! I didn’t have time to knit one, and I was afraid knit fabric would stretch too much (but perhaps he would have liked that if it had made his stocking roomier!). I ended up using this pattern, from Simply Notable, but I didn’t follow the instructions. See, I didn’t want the seams to show, so I didn’t like how the pieces were supposed to be assembled… What I did was sew two stocking bodies: I sewed both with right sides together, but flipped one right side out to be the outer stocking, then slipped the other one inside it so that the wrong sides were facing and the right side were visible. Since the inside of the stocking gets a lot of use, I wanted it to look nice too! I made a loop from which to hang the stocking, which was essential to me. And to attach the trim piece, I put it inside the stocking body to sew it, so that once it was folded right-side-out, the seam was underneath the fold and invisible. I really like the result! (The fabric was from Hobby Lobby.) 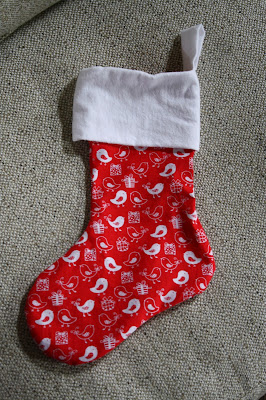