I decided to try a few recipes for various nut butter cookies that all happen to be flourless. So if you avoid cross-contaminants, they’re gluten-free, grain-free, dairy-free, paleo, what have you, but they’re just plain good! First up, the peanut butter cookie. I used a recipe from Real Simple. These aren’t the peanut butter cookies I remember from my childhood, because I’m pretty sure those had flour, but they are really good and it turns out you barely notice the lack of flour! I thought that they were great when they were warm and slightly crispy, but they went soft the next day (which is probably where flour would make a difference); I would recommend baking only one batch at a time and/or halving the recipe below, which makes roughly 3 dozen cookies. The Engineer also approved of these cookies. Note that you can roll them in sugar (see here) or add things to the dough such as chocolate chips (like here or here, both of which look really good), nuts, dried fruit or pieces of candy, though in all those cases I would not press them down with a fork. You could also use another type of nut butter, but for these, I think something with the consistency of hydrogenated peanut butter is best (I used Skippy Natural Creamy Peanut Butter, but an almond butter like Barney Butter would work well too, and perhaps nut-free butters with the same consistency).

Heat oven to 350 °F. Line 2 baking sheets with parchment (or only one, and bake one batch while leaving the rest of the prepared dough balls in the fridge). In a large bowl, mix together the peanut butter, sugars, eggs, baking soda, and salt until smooth.

Shape the dough into balls (about 1 heaping tablespoon each) and place 2 inches apart on the prepared baking sheets. Using the tines of a fork, flatten each ball, creating a crisscross pattern.

Bake, rotating the baking sheets halfway through, until puffed and golden, 10 to 12 minutes (the cookies will deflate as they cool). Let cool slightly on the baking sheets, then transfer to a wire rack to cool completely. 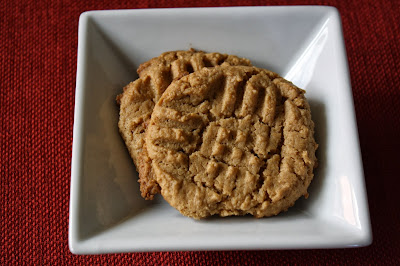 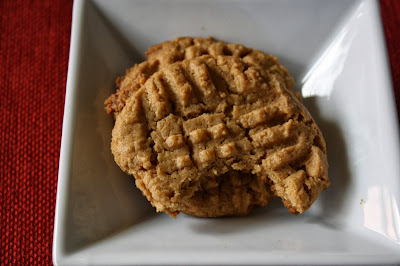 The other recipe that inspired me is actually from a cardboard box I got when I ordered multivitamins from Vitacost (and you have to love a company that makes such good use of its packaging!). In the end, though, I made the recipe from Pastry Affair because it called for vanilla, even though it is otherwise quite similar. The quantity is also more reasonable, about half of the yield of the previous recipe. For this one, you can use a more natural nut butter: I used Justin’s Classic Almond Butter, but I think something even a little more viscous would work, as would other natural nut butters like cashew or hazelnut. 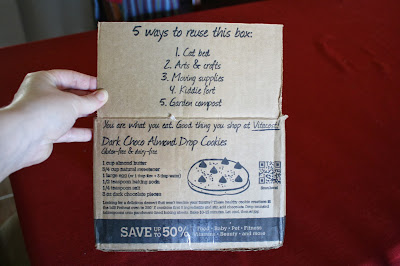 In a medium mixing bowl, mix together the almond butter and sugar. Mix in the egg, baking soda, vanilla, and salt until evenly combined. Stir in the chocolate chips.

Drop cookies by the tablespoon onto a baking sheet and bake for 10-12 minutes. Cool on the baking sheet for at least 5-10 minutes before moving to a cooling rack to cool completely. (The cookies will be very fragile and need to set up before they can be moved; I just let them cool on the silpat.) 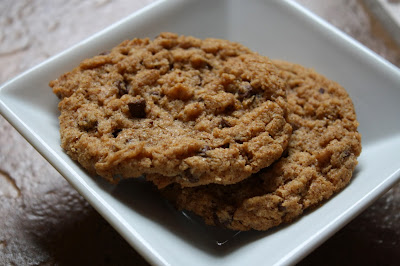 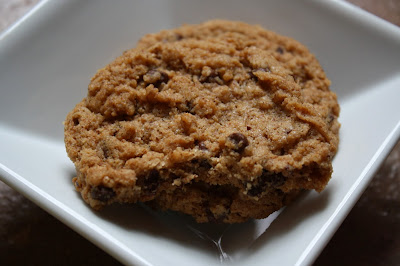