Penne with Italian Sausage and Tomato

I’ve been meaning to blog this recipe for a while, and I didn’t get around to it because… I lost it. I know I have this recipe, I MADE IT for the freezer and had made it multiple times before, but I just couldn’t find it last week. And apparently it’s not even on my own blog! So I emailed my mother (because I got the recipe from her) and she sent me a copy. I believe it’s from an Anne Lindsay cookbook. I like using mild Italian sausage, but you can definitely use something spicier if you want. I made this latest version with pasta that contains vegetables (I think it was squash), because I figured I shouldn’t turn down extra veggies when I can sneak them in. The dish is easy to make, and it’s pretty good on a weeknight, though the sausages benefit from being cooked slowly. The Engineer and I both really liked it! This makes about 4-6 servings.

In an oiled skillet, cook sausage over medium heat until no longer pink in the middle, about 15-20 minutes. Drain well, cut into thin slices.

Meanwhile, in a large pot of salted boiling water, cook pasta until tender but firm; drain and return to pot.

In an oiled nonstick pan, cook onion over medium heat until tender, about 5 minutes. Add garlic, tomatoes, basil and oregano; simmer uncovered for 10 minutes. Add cooked sausage. Pour over pasta and toss to mix. Sprinkle with parsley, salt and pepper to taste, and parmesan (if using); toss again and serve. 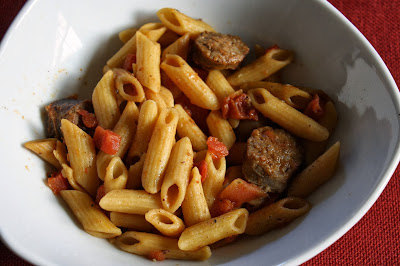