This year, we were invited for Thanksgiving dinner by one of the Engineer’s colleagues and his family. We had also had a lovely Thanksgiving dinner with them in 2011, so we accepted gratefully. Since it was also Hanukkah, we brought latkes, and the Engineer also made his gingerbread. That being said, I still have a stockpile of Thanksgiving recipes I want to try, so we decided to have Thanksgiving at our house on Wednesday so that I could make a dent in my stash! This year’s spread was pretty close to the 2011 Real Simple menu: no-knead onion rolls, cider-glazed turkey, gravy, sausage and apple stuffing, brown sugar-glazed carrots with rosemary and pecans, and sweet potato pie, plus fluffy baked mashed potatoes from last September’s issue. And then I made turkey mushroom risotto with the leftovers. I’ll just give links to the recipes here, because otherwise it’d be too clunky of a post. 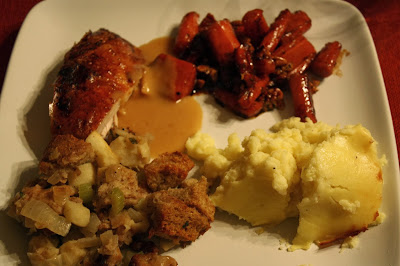 I made the onion rolls with white flour (not white whole wheat), and I have to admit that they were better than most breads I’ve made. I made these on Tuesday, because there’s no way I could have made the whole meal in one day with the Little Prince in the house! The Engineer took care of him while I cooked. (Plus, I needed the baking dish again for the stuffing.) The onion rolls weren’t as hard as I had made them out to be in my head. Somehow, bread never is, especially with a stand mixer! They were delicious, too, though there were too many for us to eat. I used real butter here and I was fine. I’d definitely make these again for a crowd! 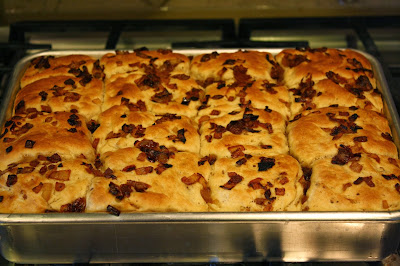 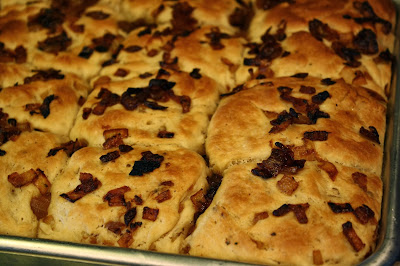 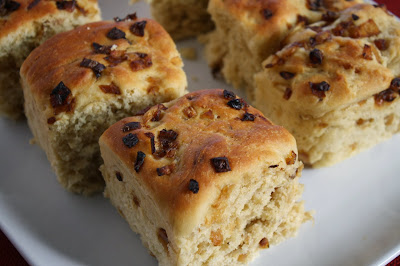 For the cider-glazed turkey, the Engineer managed to find a relatively small bird, just under 9 lbs., so it didn’t take too long to bake. I actually took it out of the oven before it was completely glazed – the cider only goes on during the last 30 minutes or so. I actually read this year something that I didn’t know about roasting a turkey (or maybe I once knew it and had forgotten): basting the turkey while it’s in the oven does not keep it moist; it only helps the skin crisp up. The quality of the meat has more to do with how juicy it’ll be, and basting the turkey after it has come out of the oven and is resting achieves no purpose other than making the skin soggy, basically the opposite of what we want. I really enjoyed this turkey, which had simple flavors and was pretty easy to make, too. Note that I used margarine instead of butter. I’m now considering making turkey more often; I’m used to seeing it only for certain holidays or gatherings, but it’s a really inexpensive way to get lean protein for the week! 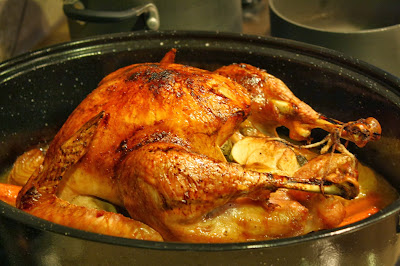 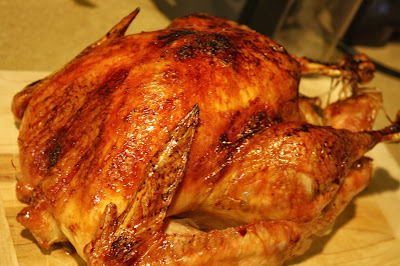 For the gravy, I didn’t actually follow a recipe. I almost didn’t make any, because I’d never made it before. But I wanted a little something to moisten the meat, especially since I opted not to make cranberry sauce this year (the Engineer had decided that he didn’t want any, and I didn’t want to eat all of it by myself). So I remembered watching my friend Rob make gravy: you start by making a roux, then you pour the pan juices through a sieve and into your saucepan while whisking. I didn’t get the proportions right, as I had too much roux, so I thinned it out a bit with water (though broth would have been better). It was delicious, though, easy to make, and a great accompaniment! What a great way to use up pan juices, too. I don’t have a gravy boat, so I made do with a little pitcher that I normally use for maple syrup. 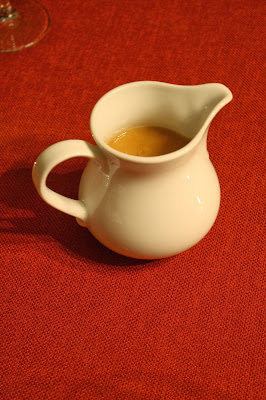 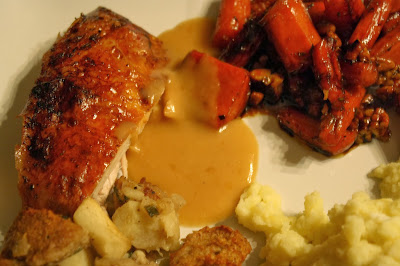 Now on to the stuffing. The Engineer said that it’s his favorite part of holiday meals, and he enjoys it even more than the turkey! I’ll keep that in mind for future years. So I made the recipe from Real Simple instead of the Epicurious one I had in my bookmarks, because both had the apples and sausage that appealed to me, but I didn’t feel like parsnip that week. I find it interesting that the former had 6 times as much broth as the latter, though! The recipe I used called for baguette, but the other recipe called for sourdough, and I think that would be good too (and in any case, a good alternative if you can’t get your hands on good baguette, which is sometimes the case here). I really liked this stuffing, though I think I’d cut the pieces of bread even smaller next time. I used mild Italian sausage, but you could adjust that depending on what your favorite sausage is. I’m suddenly thinking this would be great with Whole Foods’ chicken apple sausage… 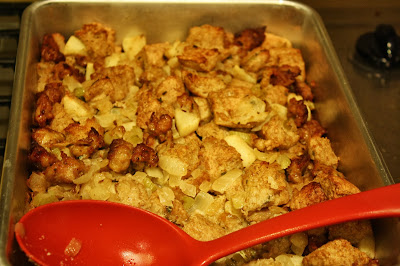 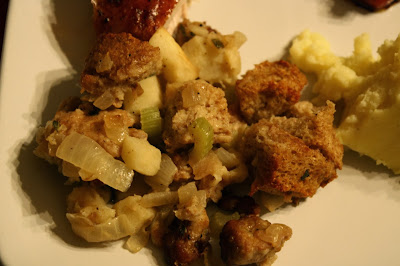 As for the side dishes, I halved the brown sugar-glazed carrots recipe. I also minced the rosemary leaves into the dish instead of leaving the sprig whole, which meant that I didn’t remove the rosemary at the end. While I enjoyed the dish, I would consider making it without the nuts next time… I also made these fluffy baked mashed potatoes. They appealed to me originally because they contain cream cheese, which is delicious, and because they are mixed with beaten eggs before being baked, so I was attracted by the novelty of the whole thing. In the end, though, I made a lactose-free version by using Greek yogurt instead of the cream cheese. It still had some of the tang that I would have lost with a soy substitute, but it wasn’t as pronounced as the taste of cream cheese. I have to say, though, that the recipe calls for much more butter/margarine and milk than I usually put in mashed potatoes, but the texture (before adding eggs) was wonderful! It’s giving me ideas for next time I make something like this. Anyway, I didn’t quite get the top browned enough because I baked it with the stuffing while the turkey was resting, and it was either burn the stuffing or not broil the mashed potatoes, and I made a judgment call. 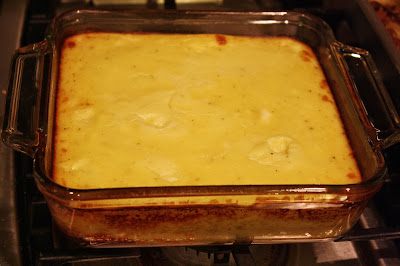 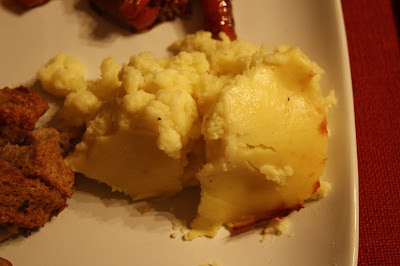 And finally, dessert: sweet potato pie, a classic. I had actually been putting off that recipe for a while, because it calls for sweetened condensed milk, which is full of lactose and I didn’t have an equivalent. But I realized that I had two substitutes bookmarked: one from Cooks.com, where you just mix a bunch of ingredients that don’t really have anything to do with milk, and one from GoDairyFree.org, in which you mix a non-dairy milk with sugar and let it reduce. Since I at least recognized the process in the second recipe, that’s the one I used. I made it with rice milk, and essentially, I made a slightly less thick version of brown rice syrup, which is perfectly logical. Note that a 14-oz can of sweetened condensed milk is measured by weight, not by volume, so you don’t have to adjust the quantities (you’re looking for 300 mL, or just over a cup of fluid). For this pie, I also didn’t use real sweet potatoes, preferring 2 15-oz. cans of sweet potato purée. This actually made too much filling for the pie, I suspect; I used my deep pie dish, but it took forever to bake and never quite set properly in the oven (I gave up after a full 85 minutes!). That being said, it was fine once it cooled! I should have baked it a little less, then, and I’ll use less sweet potato purée next time. I also didn’t have lactose-free cream, so I served it with Rice Whip and topped it with (non-candied) nuts. While I like the whipped topping, I’d omit the nuts entirely next time. The recipe itself is one I’m keeping! 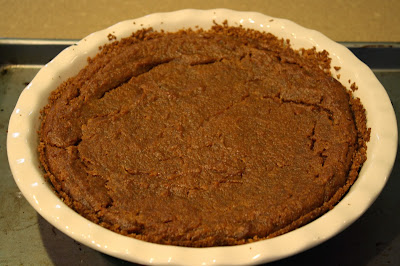 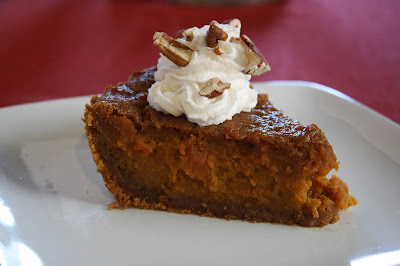 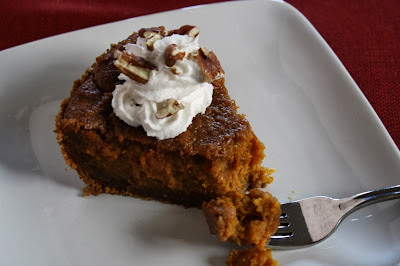