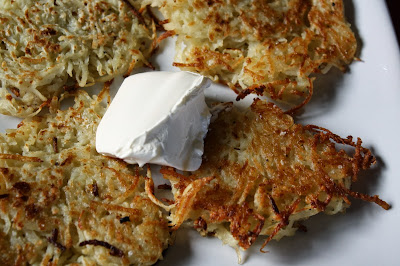 Since the Engineer, the Little Prince and I had Thanksgiving dinner with friends, we decided to contribute a little something special: latkes. It was the first time since the 1800s that Thanksgiving and Hanukkah coincided, and apparently it won’t happen again for another 70,000 years, so latkes seemed like the only appropriate way to celebrate. This time, I went with this recipe, found via ”A few keys to transcendent latkes” on The Kitchn. Spoiler alert: the keys are the correct ratio of potato to onion to binder, the correct oil temperature, and salting the latkes immediately after frying them. (I think after this, I only have three recipes left to try. Then there should be a showdown at some point…) I really liked these latkes, but I think I’ve been spoiled by my duck fat latkes and should probably use that exclusively to fry latkes from now on. The recipe below makes about 40 latkes.

Stir in the matzoh meal and season generously with salt and pepper. Mix well with a fork, making sure to distribute the eggs thoroughly.

Heat a few glugs of oil in a large heavy skillet (you'll use about ¼ cup oil at first, but you'll keep adding more) over medium-high heat. I like using two skillets at the same time, to speed things up. To see if the oil is ready, put in a pinch of potato mixture; if it sizzles and turns golden in about 10 seconds, the oil is ready. Use an ice cream scoop or ¼-cup measure to form the latkes; drop in the oil and flatten gingerly with a spatula. Cook until golden brown, about 2 minutes per side. As you proceed, the pan will get hotter and the oil will need to be replenished. Adjust the heat and add new oil as necessary. Carefully remove any burnt particles.

When latkes are done, transfer to a paper towel-lined plate and sprinkle immediately with salt. Transfer to a rimmed baking sheet and keep hot in the oven. Repeat until you've cooked all the latkes.
Serve hot, with lactose-free sour cream, apple sauce or sugar (a Hungarian tradition passed down on the Engineer’s paternal side). I like ending things with sour cream AND sugar on a single latke, but confess that as a side, I eat them plain, with sour cream if it’s lactose-free, or with apple sauce. 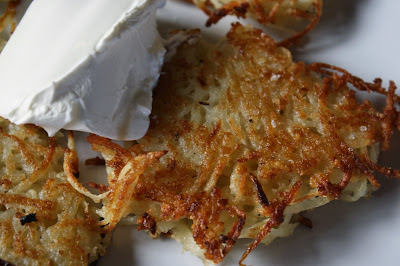