I have two pet peeves regarding infant clothing sizes. The first, I vented about on Facebook not too long ago, saying something along the lines of: “Given the increasing popularity of cloth diapers, would it be too much to ask of clothing manufacturers to adapt by making baby pants of the appropriate shape and size?” You see, cloth diapers are bulkier than disposable diapers. In the summer, this wasn’t a problem for me, because the Little Prince wore onesies in the house, and when I put pants on him to go out, he had a disposable diaper on, so the pants basically fit. But now that it’s cold, he definitely needs pants indoors, too. And there’s the problem: the only pants that fit over the cloth diapers are grotesquely long on him, and any pants that are close to the right length will never fit over a cloth diaper! I am loathe to buy several big pairs and hem them all, yet that would sometimes be better than rolling up the pants to the extent needed. As it is, I’ve basically given up on “structured” pants indoors, as the only ones that can fit over the diapers are of the sweat pant persuasion. I now look for elastic waists exclusively and buy big. I understand that 10 years ago, this was a problem only for a tiny minority of the population, but there are so many families using cloth diapers these days that I’m amazed no clothing manufacturer has stepped up to fill that niche!

To give you an example: on the picture below, the Little Prince is 3 months old. The Old Navy pants on him here are a size 6-12 months , and I couldn’t even button them because of the cloth diaper. You can just barely see his left toes peeking out from under the hem, which I’m sure you’ll agree is already rolled up quite a bit! 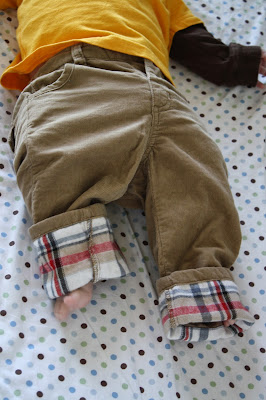 My second pet peeve is about the way clothing is labelled, size-wise. There is no consistency from one brand to the next, and sometimes not even within the same brand. Not to mention the discrepancies between the actual age of the child and the size on the garment label! I had been told that babies wear whatever size is twice their actual age (so a 3-month-old baby would wear 6-mo size clothing), but it isn’t even that simple.

When I started writing this post, the Little Prince was 4 months old. He no longer fit in 6-mo onesies from Babies”R”Us, but even now still has room to grow in 6-mo onesies from babyGap. The 6-9-mo Gerber onesies no longer fit, but the 6-9-mo First Impressions onesies are still too big, as are Carter’s 9-mo onesies (the matching pants barely fit width-wise with cloth diapers, but are too long). He fits in some 6-12-mo onesies, but not others (Old Navy and Leveret both seem too roomy on him, though again he barely fits in the 6-12-mo Old Navy pants even with a disposable diaper). He barely fits in a Falls Creek 3-6-mo pair of pants, which is bigger than an Amy Coe 6-mo he has outgrown. This isn’t an issue with adult sizes, because even though numbered sizes have changed over the years, they are still consistent from brand to brand at any given point (at least, that has been my experience).

Gerber tends to run small, but even then isn’t always consistent. I have two pairs of socks/booties from the same package that were labelled 0-3 months; one is now too small, but the second pair fits, loosely enough that they fall off easily. I also have two pairs of babyGap shorts labelled 6-12 months; one was outgrown over a month ago, the other still fits (over a disposable diaper, obviously), and both are smaller than the 6-12-mo onesies from the same brand (which themselves are wider than other brands).

There even seems to be little consistency between the size of the baby and the size on the label of various brands. I mean, first, kudos to the brands that do have the good sense to specify what their sizes mean! But I have a onesie from Kushies, size 6-mo, which they say is for babies between 12-16 lbs. and 21”-24”. For comparison, at Babies”R”Us, the same size corresponds to 12-17 lbs. and 24”-27” (so they expect babies to be taller for a given weight, I guess). But for Amazon, it is way smaller at 11 to 15.5 lbs. and 23.6” to 26”! That’s obviously smaller than average: the average birth weight is around 7.5 lbs., and babies usually double their birth weight at 4 months, which would mean that 15 lbs. would be in the middle of the range at 4 months, NOT the upper limit at 6 months. But at 4 months, the Little Prince was 18 lbs. and 27” (he was already 22” at birth!), so he can only wear the Kushies onesie with an extender, although interestingly enough, the sleeves still fit. This is what he is wearing in the picture below, at 4 months. Sure, he is in the upper percentiles of the growth chart, but still within normal range. Are there parents of smaller babies out there who have the opposite problem? 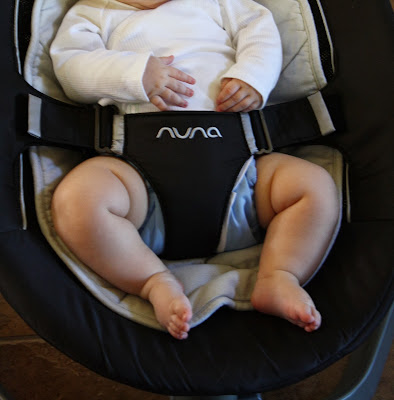 So far, the brand that seems to be the exception is Gymboree – I got 2 pyjamas at a yard sale that are labelled 3-6 months, and while the Little Prince started wearing them at 3 months, he still had room to grow in them. Admittedly, pyjamas tend to be roomier than onesies, and the sleeves and pant legs seem a little short on him these days, but I have no problem buttoning anything and the fabric isn’t pulling anywhere.

So I guess what I’m trying to say is, how about more consistency? Why don’t brands size their baby clothing with the same criteria in mind? And why don’t they start making pants for cloth diapers? Heck, cloth diapers companies would make a fortune if they made pants, too!

Ahahaha! I remember, before Theo was born, saying something along the lines of, "Well, at least kids' clothing sizes aren't nearly as inconsistent as women's!" Little did I know.

Our long-torsoed, often cloth-diapered kid was in 24-month-sized onesies by 9 months for the reasons that you describe, and even now we basically use soft, elastic waist pants for when we're at home and he's in a cloth diaper, and more structured jeans for out-and-about / disposable wear. Happily, the adjustable waistbands that enter the picture at sizes 2T & up help a lot, but we still have to roll Theo's pants up a comical amount. It all feels stupidly complicated. I know parents of super-skinny 3 & 4 year-olds who have the opposite problem: the only pants that don't fall off their kid's waist are way too short.

I don't remember if you sew, but I made a bunch of elastic-waist shorts from the downloadable Big Butt Baby Pants pattern, and those fit over his prefolds & covers really well! I was also able whip up a bunch of pairs at once in some cheap cotton, which was great for the summer months when any and all outside activity ended in a wardrobe change due to wet clothing. If you sew, the pattern's definitely worth checking out.

Awesome, thanks for the link! I do sew, but I haven't had time for that lately. I just barely finished knitting a Christmas sweater (post to come, hopefully tomorrow).

I'm glad to know it's not just me. Another friend emailed me and told me that now that her kids are 5 years old (twins), they have the opposite problem as pants are too roomy for them. And apparently, clothing sizes are just as inconsistent in the children's department!

Someone pointed out something to me over the holidays. Perhaps manufacturers label clothes with bigger sizes than needed because it's better than the alternative. See, if your baby is 5 months old and wearing size 9-months, you think he's healthy and growing really well. But if your baby were 9 months old and still wearing 6-month size clothing, you might worry that he isn't reaching all his milestones or that his growth is stunted somehow...