A while back, I noticed that I had almost a half-dozen recipes bookmarked for chocolate ice cream (not even including those in The Vegan Scoop, which I still haven’t touched). I figured that if I were to make them one by one, several months apart, I would never really know which was the best. So I made four of them to compare (I could only make the fifth one in Canada), sometimes changing the recipe a bit to make the contest fair – for example, I know that I don’t like grated coconut in ice cream, so I omitted it in any recipe that called for it; I also didn’t make the caramel in one recipe, because I was testing the chocolate ice cream base, not the chocolate-caramel ice cream intended. It turns out that two recipes are worth sharing here.

The first I tried was a vegan chocolate gelato. I didn’t like it; I found the texture both grainy and oily, and I ended up throwing most of it away. I tried another vegan chocolate ice cream, which was supposed to have some Mexican spices with it, but even then, it felt watery and bland, not sweet enough, and the coffee was out of place. Most of that one also ended up being thrown away. The one that I couldn’t make here is from Bon Appétit; it calls for heavy whipping cream, and for the moment, lactose-free cream is still only available in Canada. It sounds really good, though: “The chocolate ice cream is so rich, it doesn’t melt – it just gets truffley.” It’s also supposed to be made five days before you plan on eating it! If you have access to lactose-free cream, keep it in mind. Otherwise, I’ve got our two winning recipes below. Both are lactose-free, though one has dairy, and they are both custard-based, so not vegan. 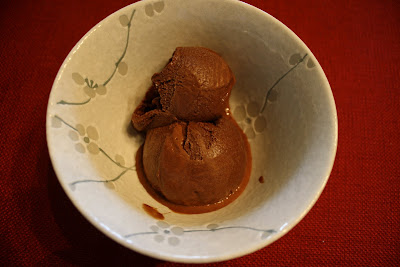 The first recipe is a dairy-free chocolate coconut ice cream from Food & Wine, though as I said, I don’t use the grated coconut, only the coconut milk. I increased the amount of coconut milk to avoid having half a can left over, and I used coconut nectar instead of agave syrup (though you could use maple syrup if you wanted, too). It was very chocolaty and hardly tasted like coconut at all; it took a while to freeze, but it reached the proper consistency by the next day. At the time, the Engineer said it may have been the best ice cream I had made – ever.

Set a fine-mesh sieve in a large bowl set over a bowl of ice water.

In a small saucepan, whisk the coconut milk and agave syrup over moderately low heat until warm. In a medium heatproof bowl, whisk the sugar and cocoa powder. Gradually whisk in 1 cup of the warm coconut milk until smooth, then whisk in the egg yolks. Scrape the cocoa paste into the saucepan and whisk until blended. Cook the custard over moderate heat, whisking constantly, for about 6 minutes, until very hot and slightly thickened; do not let it boil. Immediately strain the custard into the prepared bowl and stir in the vanilla. Stir the custard until chilled. (I put it in the fridge for a while to make sure.)

Freeze the custard in an ice cream maker according to the manufacturer’s directions. Transfer the ice cream to a large plastic container and freeze until firm, at least 4 hours (longer in my case). 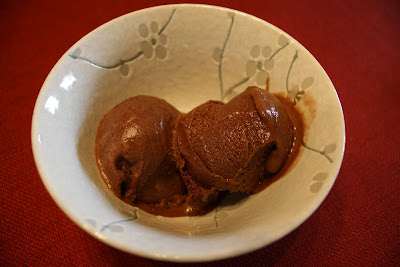 The other recipe I want to share is a chocolate ice cream recipe from Seven Spoons, which I modified to exclude the caramel (again, I have no lactose-free cream here anyway). For this one, I used bittersweet 60% chocolate instead of the 70% chocolate recommended. This dairy ice cream became the Engineer’s favorite, hands down! He found the coconut chocolate ice cream too grainy in comparison. I love both of these custard-based ice creams, but I almost feel the reverse in terms of texture – I felt that the coconut chocolate ice cream was smoother than the dairy one. So I still have a slight preference for the coconut one, but we’re definitely keeping both recipes. Here’s the dairy one, below. Refer to the link at the beginning of the paragraph if you want to add the caramel to it.

Place the chocolate in a small bowl set over a pot of simmering water, making sure that the bowl does not touch the water. Stir until the chocolate is melted, then remove the bowl from the heat and set aside to cool.

In a medium, heavy-based saucepan, whisk the milk and cocoa powder over medium heat together until the mixture comes to a gentle boil. Set aside.

Prepare an ice bath and set a bowl in it.

In another bowl with a whisk, electric beater or stand mixture, beat the eggs and sugar together until the color has lightened and the mixture is thick, around 5 minutes. At this stage, the mixture should fall back upon itself in a ribbon when the beaters are lifted. Whisking constantly, pour the hot milk into the yolk mixture in a thin, steady stream. Return the mixture to the saucepan and whisk in the melted chocolate.

Cook over a low heat, stirring often, until the mixture thickens. This should take around 8 minutes. Remove from heat and strain the custard through a fine-meshed sieve into the bowl over the ice bath. Stir occasionally until the custard is cool, then cover and chill in the fridge.

Freeze the custard base in an ice cream machine as per manufacturer's instructions. Once churned, transfer to a clean container, cover and freeze for 3 days to allow the flavors to develop. (I didn’t do this, though by the time we compared ice creams, it had been 3 days.)

Hey, very nice site. I came across this on Google, and I am stoked that I did. I will definitely be coming back here more often. Wish I could add to the conversation and bring a bit more to the table, but am just taking in as much info as I can at the moment. Thanks for sharing.
mango juice