Hi y’all! Sorry I’ve been slacking on the posts, but I’ve been a bit busy lately; now that I have my green card, I’ve been able to start freelancing again, and I’m in the middle of a contract right now. However, we just hosted the Legal Chef and his wife, E., for a long weekend, and we’ve been to a restaurant that I have to share (two, really, but I’ll only write about the recent discovery today). It’s called the Tejas Steakhouse & Saloon, and was recommended to us by the owner of our dog Darwin’s best friend, Sarge. This place serves authentic Texas cooking, and on Saturdays from March to November, there’s a pro rodeo followed by a live band!

We got there on Saturday evening, close to 7:30 pm, and the place was really hopping. It’s a bit surprising at first, because the restaurant seems to be in the middle of nowhere (there are fields all around, no streetlights, and the only signs of life are the occasional farm animal, then you round a corner and there’s a sea of cars parked all over the place). We parked in a field patrolled by sheriff’s deputies and made our way to the restaurant. In hindsight, patronizing only the restaurant that evening was a bit of a mistake; we should have gotten there earlier for dinner, then stayed for the rodeo (which is $10 per person). We did get a reservation for a table on the patio, though, so we got to soak up the atmosphere. It was like everyone was there, wearing cowboy boots, cowboy hats, and plaid. I spotted a cowboy ambling about with a coiled rope in one hand, so I assumed it was a lasso, until he got closer and I realized it was an extension cord. A modern cowboy, I guess.

So we’ve established that the mood is high in local color and quite entertaining. Now on to the food! The reason we were there was the steak: before coming in from Toronto, the Legal Chef had requested a 72-oz steak. As far as I know, those are only served in one place in Amarillo, and even that’s a gimmick. The Tejas Steakhouse, though, has a 56-oz steak on the menu, the biggest I’ve seen advertised. Sadly, the Legal Chef wimped out and ordered a 22-oz T-bone steak. E. had an 8-oz tenderloin steak, the Engineer had the Tejitas (Texas-style fajitas), and I had my first chicken-fried steak. While I’m happy that I tried it once, I think the hype isn’t really worth it, and I’ll probably get a tenderloin or a burger next time (the steakhouse also serves soups, salads, sandwiches, and "critters they don’t rope”, i.e. chicken and fish). But to me, the revelation of the night was the starter of pan de Tejas, the original cowboy camp flatbread: “our version is topped with a pesto-like ‘mash’, cheese, and greens, for a rich, salad-like appetizer” It was absolutely fantastic! There were tomatoes, goat cheese, mixed baby greens and balsamic vinegar on this thing, and I could have eaten the entire plate by myself. Plus, the table gets free rolls that are warm, somewhat lemony, and full of grated cheese and cracked pepper – delicious!

This place is not only the perfect restaurant for guests, but I think the Engineer and I will be going there on occasion by ourselves. We were overjoyed with the atmosphere and the food! 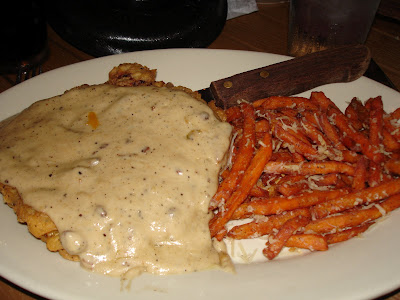