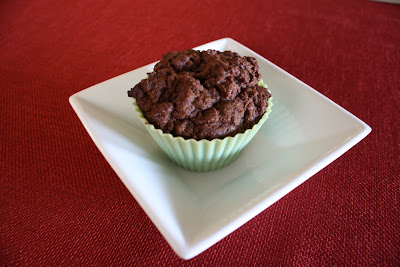 These muffins contain three different kinds of coconut ingredients, two of which I hadn't really used before. First, there’s coconut flour, which is made by pressing the oil and water out of the “meat” of a coconut and grinding what is left into flour. It is packed full of fiber (6 g of fiber per 2 Tbsp of flour) and protein, is gluten-free and is considered hypo-allergenic, because so few people are allergic to coconut (again, not an actual nut). The thing to know is that coconut flour sucks the moisture out of cake batter (or cookie dough or whatever you’re using it for), so you can’t just substitute it gram for gram in a recipe; ideally, you should add eggs to your original recipe (if you feel like experimenting), or find a recipe that was created with coconut flour in mind. I chose the latter. Keep in mind that the result is often a dense baked good. Coconut flour has a mild taste of coconut, but it’s certainly not overwhelming. I’ve heard that apart from baking, it is a good addition to smoothies, for a little extra protein and fiber.

There was also coconut sugar. Strangely, it doesn’t taste like coconut either, more like dark brown sugar – it reminded me of molasses in taste, but of musovado or turbinado sugar in appearance. (There is such a thing as coconut nectar, too, which I’ve also used in a few things – more on that later). Its selling points are mainly that it has a low glycemic index and that is it more natural than refined white sugar. And third, I used coconut oil, which again has a slight taste of coconut, but nothing too pronounced.

So all this to say that I made chocolate and coconut muffins created by Clotilde Dusoulier, of Chocolate & Zucchini. I weighed the ingredients for this recipe, but there are volume measurements if you wish. The muffins’ coconut taste is really very subtle, and the chocolate really takes over. The muffins are crispy on the outside, while smooth and dense on the inside. The recipe only makes a half-dozen and they are really good, so there probably won’t be any leftovers, but if there were, these muffins freeze well. Oh, and they happen to be nut-free, dairy-free and gluten-free. Enjoy!

Preheat the oven to 350 °F and line a 6-muffin baking tray with silicone or paper cups. (If you don’t have silicone cups, I think I would actually recommend greasing the tray instead of using paper cups, though, just because I have a feeling you’d lose less muffin to its container that way.)

Melt the chocolate in a double-boiler.

In a medium bowl, combine the flour, sugar, baking powder and salt, and set aside.

Add the coconut oil to the melted chocolate, then add the eggs one by one, beating well after each addition. Fold in the dry ingredients.

Pour the batter into the muffins molds and bake for 15-20 minutes, until a toothpick inserted in the center of one comes out clean. 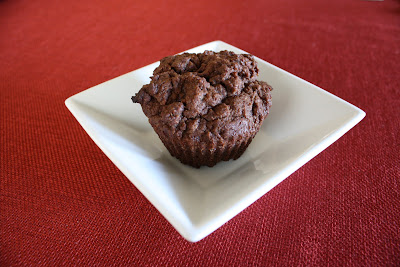 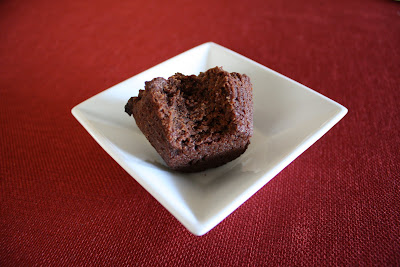