Alright, so my schedule cleared up a bit, and I decided to play catch-up with all those recipes I’ve made lately. I was hesitant about posting this biscuit recipe, because they looked like a complete flop when they came out of the oven – the melted cheese had oozed everywhere, while the biscuits themselves were flat and pale. However, I bit into one, and dang it if it isn’t the flakiest biscuit I’ve made! It also tasted fantastic. What I did change in the recipe was to use flour and corn starch instead of cake flour, but I’ve done that before without my baked goods suffering any ill effects, so I don’t think that was the problem. I’ll give you both options below. Next time, though, I’ll grate the cheese instead of cubing it, and I’ll put the biscuits in the fridge for a while before I bake them, and hopefully that will help the cheese stay in its place. Note that I used butter, so these aren’t really lactose-free.

I served them with a roasted butternut squash and red lentil soup, which was only so-so. I mean, I’ve made better squash soup AND better red lentil soup, so this one literally wasn’t bringing anything to the table and I won’t be talking about it any further.

Preheat the oven to 450 °F. In a medium-sized bowl, measure out the flours, baking soda, and salt. Stir well and set aside.

Remove the butter from the freezer and stir into the flour mixture, taking care to evenly distribute so as not to have any overly large clumps stuck together. Stir in the buttermilk until the mixture comes together and is moist.

Turn the dough out onto a floured surface and knead a few times until you can form a rough ball. Flatten the dough into a circle about ½" in thickness. Using a biscuit cutter or a drinking glass (about 3" in diameter for the listed baking time) turned upside down, cut as many rounds as you can. Using the dough scraps, form another circle of the same thickness. Repeat cutting until you have used all the dough.

Place the biscuits on a parchment paper-lined baking sheet (which I suggest putting in the fridge for a while) and bake at 450 °F for 10-12 minutes. The biscuit tops should be lightly browned. Serve immediately. 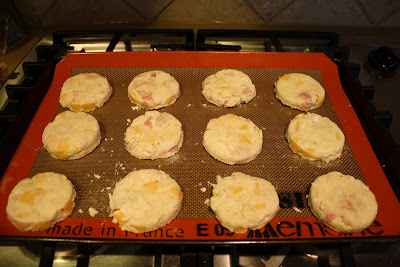 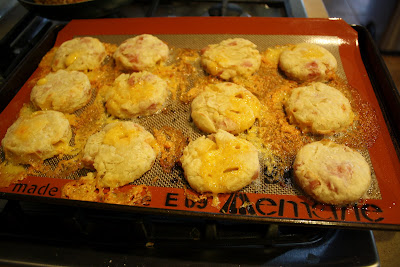 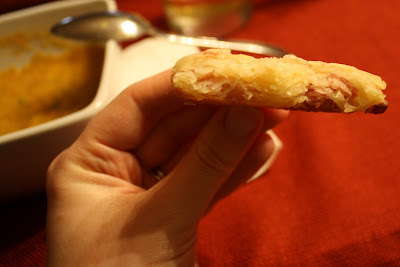