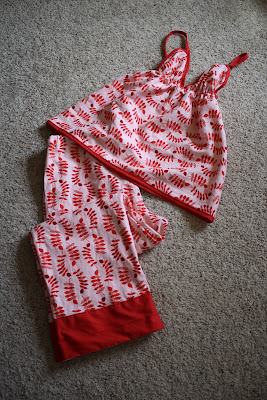 My most recent sewing project was a pyjama. I had seen some nice printed fabric on sale and jumped on the occasion by buying three yards of it, then I bought 1 yard of coordinating fabric. Since the pink print wasn’t really something I’d wear as a shirt or a dress, but I still liked it, a pyjama seemed like the perfect thing. I looked through the sewing books I’ve got and settled on two patterns: one for lounge pants from Sewing Green and one for a nightie top from One-Yard Wonders. I’m starting to realize, though, that patterns from books and patterns printed from online sources are more often inaccurate than patterns bought by the unit (this is also the case with the project I’m currently working on; more on that later).

In this case, I only realized after cutting the fabric for the pants that the seam allowance was just ¼ inch. Most patterns I’ve worked with so far had between ½ inch and 5/8 inch for the seam allowance, which is enough for French seams, but ¼ inch is not. I did the French seams anyway at first, and while I could still put on the pants, they looked a bit tight and were not as comfy as one would want for pyjamas. So I ripped the seams and sewed the fabric right sides together, then I ended up making the inside seams pretty with single-fold bias tape (this is a trick I picked up in my last project, which I’ll post about soon). For the side seams, I just rolled the bias tape onto itself to avoid visible thread on the outside; for the crotch, I laid it flat on the seam and sewed both edges directly onto it, since the original pattern had me sew the seam trim flat with two seams anyway – my way may be more complicated, but I think the finished result is much prettier. And this is starting to matter to me; I like patterns that account for the inside finish as well. Trouble really came for the cuff of the pants: the pattern, which I cut out exactly as printed in the book, was actually 2 ½ inches too short for the cuff. I couldn’t fix it, so I had to cut a new piece of fabric, after some measuring. I’ve never had this problem with a pattern sold by the unit! The instructions for assembly had me confused, because I felt they weren’t clear at all, but I figured them out. In the end, though, I’m really happy with this pair of pants. They look good and are comfortable, so I’ll definitely wear them and perhaps make more. 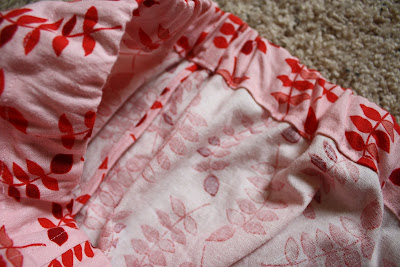 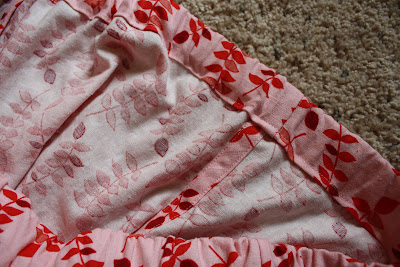 As for the top, it’s a little more revealing than I had hoped. I can wear it around the house when my husband is the only one who’ll see it, but I’m not really comfortable with it. There was an added problem with it: I cut the fabric exactly as required by the pattern, without questioning anything, and made the rookie mistake of not accounting for the direction of the pattern. So the print isn’t in the same direction on the pant leg as on the stomach! Then again, it’s supposed to be diagonal on the bust area anyway. Also, once I realized my mistake, I measured the fabric I had left and realized that even if I had wanted to, I couldn’t have cut the stomach and back pieces with the correct orientation in the yard of fabric I had left. So it was originally my mistake, but I couldn’t have fixed it anyway. I did have enough contrasting fabric to make all the double-fold bias tape needed, though, and I liked the finished look it gave the garment (too bad there’s still one seam with an unfinished look under the bust). 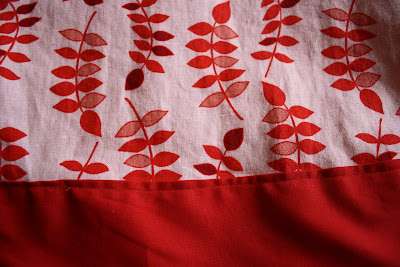 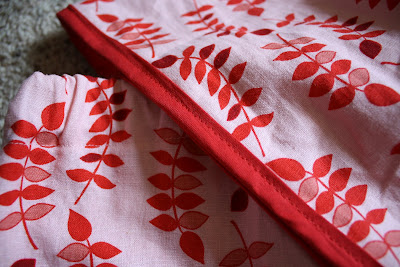 In the end, I think the nightie top will stay in my drawer a lot, but I’ll find something nice to wear with the pants, perhaps a tank top I already own. My total expense: 3 yards of linen-cotton blend on sale at $4.89/yard on Fabric.com, one yard of cotton on sale at $5.60/yard, 2 spools of thread for about $5.50 and a few dollars of elastic, for a total of about $30.00. Not bad!