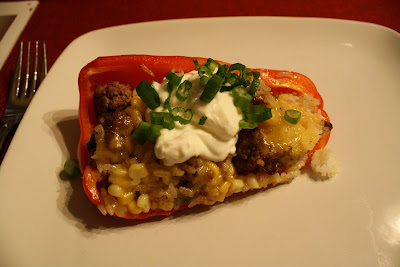 The Engineer and I have found a source of (more) ethical beef at our local grocery store. It’s a brand called Dakota Beef, and our store carries both its ground beef and beef sirloin. It’s still very little choice compared to the vast array of meats available, but it’s a good start. The cows are humanely raised on organic pastures, their diet is entirely vegetarian, and they aren’t given any hormones or antibiotics. My non-scientific observation is that ethical meat costs about twice as much as the “regular” kind, but since we eat about half as much meat as we did last year, our total grocery bills are comparable, and we live in a way that’s closer to our values. So that’s the ground beef we used for this recipe from Real Simple.

We both really liked these stuffed bell peppers. I particularly like that the meal has protein, grains and vegetables all in one, while the Engineer likes the primal feeling of eating the container! I topped them with plain Greek yogurt, as the recipe suggested, and was surprised to realize that it really did feel like rich sour cream. I’m not sure if it’s because I hardly ever eat sour cream anymore or if it’s because yogurt should in fact be regarded as more than just a healthier substitute in this scenario, but it worked out wonderfully.

Heat oven to 375 °F. Cook the rice according to the package directions.

Heat the oil in a large skillet over medium-high heat. Add the scallion whites and beef and cook, breaking the beef up with a spoon, until no longer pink, 3 to 5 minutes. Stir in the corn, chilies, cumin, cooked rice, ½ cup of the Monterey Jack, ½ teaspoon salt, and ¼ teaspoon black pepper.

Spoon yogurt over the bell peppers and top with the salsa and scallion greens. 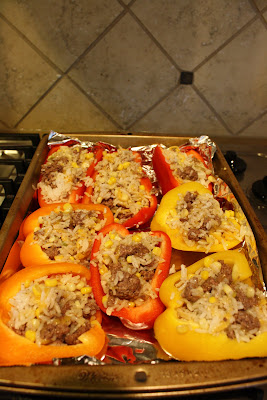 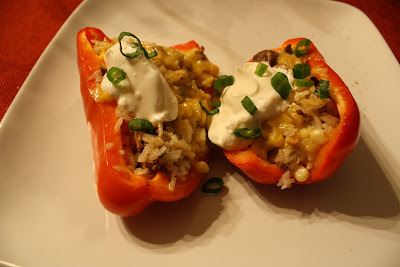