Baked Spinach and Pasta with a Creamy Roasted Garlic Sauce 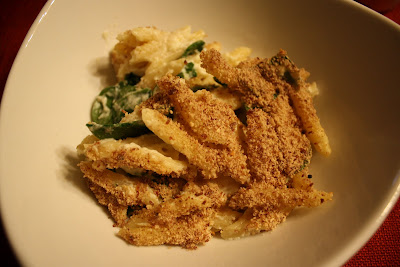 This recipe was quite good, better than I expected, in fact. You see, it’s my first time making a creamy pasta sauce that is also vegan, or at least, one that works out as intended. The Engineer made his happy face and even had seconds, so this is one dish I’ll be making again. I also realized recently that most commercial pasta is vegan; I don’t know why, but I thought all pasta had egg. I guess most homemade pastas do, and some commercial ones do, but really, a surprising number don’t. The eggs were listed as a cross-contaminant on the package, but were not directly an ingredient (so if you don’t have an allergy and aren’t a totally strict vegan, most pasta is fine). If you aren’t sticking to a vegan diet, feel free to top this with grated parmesan. I’d also be a bit more generous with the salt and pepper next time. If you are grinding flax seeds for the topping, be sure to use a spice grinder, not a food processor (the latter did nothing whatsoever with the seeds).

Preheat oven at 400 °F. Peel all the cloves of garlic from the 2 heads and remove their tough bottom tip. Bake for 30 minutes, loosely wrapped in aluminum foil; they should be slightly softened, light golden in color, and much sweeter than raw garlic. Set it aside to cool and lower the oven temperature to 350 °F.

While that’s roasting, prep everything else. Boil the pasta until soft, then strain and set aside. Wash the spinach well, remove the bottoms of the stems, and cut the leaves coarsely (they will shrink a bit when baked, but feel free to chop them small, too). Mix even parts of flax meal and breadcrumbs to sprinkle over the baked pasta dish (optional, but recommended, as the crunch is nice).

Once the garlic is done roasting and has cooled enough to be handled, throw it in the food processor along with the tofu, oil, salt and pepper. Process until you get a nice, creamy sauce.

Mix the pasta, spinach and garlic sauce in a large bowl. Spoon out portions into small dishes for individual servings, or into a casserole dish, depending on what you have. Sprinkle with the flax meal / bread crumb mixture, if using, and bake for about 15 minutes or until the top is beginning to look crunchy and baked.