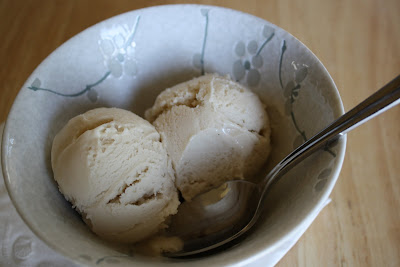 I got this recipe from The Vegan Scoop (which contains recipes with amazing flavour combinations that I can’t wait to try). The name of this reminded me of Petit Alep’s 5-spice sherbet, which I love, and it has the added bonus of being made with soy milk and arrowroot starch as a thickener, as opposed to coconut milk. I say this is a bonus because the Engineer doesn’t really like the texture of sorbets made with coconut milk, so I was hoping this would be up his alley.

Texture-wise, I found this ice cream more watery and less rich than the ones I make with coconut milk; the Engineer did like the texture, however, so that’s a win, I thought it was very good, but I would add a bit more cardamom next time. Also, since I’m not really crazy about the taste of soymilk in the first place, I would try rice milk when I make it again, but that’s up to you.

Finally, because I’ve had this question in the past: yes, it is possible to make ice cream without a proper ice cream maker. Read this post on The Kitchn for two different methods. It is, of course, more labour-intensive than with an ice cream maker, and the consistency *may* be a little different (in the same way a sorbet made without an ice cream maker is often more of a granité than a proper sorbet). That being said, it can be useful if you want to try making your own ice cream but aren’t ready or willing to invest in an ice cream maker.

In a small bowl, combine ¼ cup soymilk with arrowroot and set aside.

Mix soy creamer, remaining ¾ cup soymilk and sugar in a saucepan and cook over low heat. Once mixture begins to boil, remove from heat and immediately add arrowroot cream. This will cause liquid to thicken noticeably. Add vanilla extract.

Refrigerate mixture until chilled, approximately 2 to 3 hours. Mix in cardamom. Freeze according to your ice cream maker’s instructions. 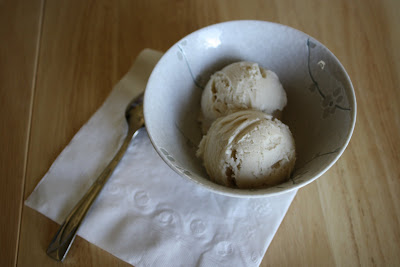 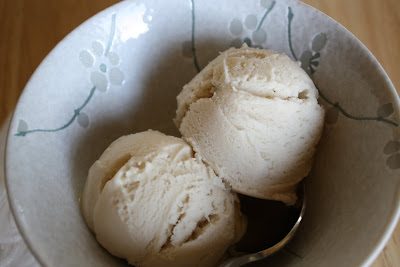