I’ve convinced the Engineer to adopt a new rule in our household. It’s somewhat like a resolution, but I enjoy Bill Maher’s New Rules, so I’ve kept that term. I’ve declared (and after listening to my reasoning, the Engineer has agreed) that each month, we would make the effort to do an activity in or around San Antonio. There are so many things we’ve been meaning to do, but we somehow never quite get around to doing them. This way, though, we force ourselves to get out of the house each month and check something off our list. We decided to start off September by visiting the McNay Museum; it’s $8 per person, but admission is free on the first Sunday of each month.

Honestly, I wish we had gone much sooner. It’s a small museum in what used to be a private house (much like the Philipps Collection in Washington), but it houses an extraordinary collection of art. If you’re looking for big names, this is it! There are paintings by O’Keefe, Picasso, Renoir, Monet, Manet, Cézanne, Toulouse-Lautrec, Chagal, Matisse, Rousseau and Rivera (to whom I refer as Frida’s husband), as well as sculptures by Rodin, just to name some of the artists. We saw Medieval and Renaissance religious works from as early as the 15th century (including a painting on wood of St. Bonaventure that fascinated me) as well as modern religious sculpture from New Mexico. I hadn’t brought my camera with me, but it turns out you’re allowed to take pictures (without flash) of any item in the permanent collection! You can also dial a number with your cellphone to get an audio guide to some of the artwork.

If you go, don’t forget to enjoy the patio in the courtyard, which has beautiful plants along with a fountain and lily pads. The Spanish-colonial house itself is very impressive, and there are numerous modern sculptures on the grounds. You might also see some weddings (we were there around 10:30 this morning and saw four different brides posing for pictures).

I also discovered an artist whose work I fell in love with: Carl Rice Embrey, who’s a local painter doing meticulous realism. When I saw the first of his canvases, I thought of Alex Colville, but this is way more real; it’s like a high-def piece of art that could pass for a photograph. The image below, though not as impressive as the original, was my favourite in the exhibit. It’s titled Edith. 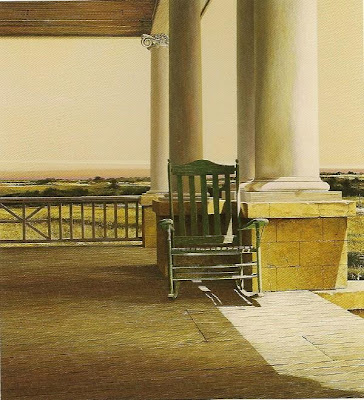