I wanted to make another plum cake before plum season was over. I ended up making a dimply plum cake found on Smitten Kitchen and created by the legendary Dorie Greenspan. The cake looked delicious, and I loved the idea of using cardamom instead of cinnamon with the plums. I also liked the other flavour combinations that were suggested (orange with a bit of star anise, cherries with mint or peaches with some fresh lemon and basil). When I tasted it, though, I thought, “Meh.” It was ok, but the dough didn’t impress me. 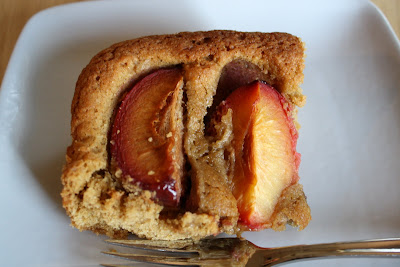 I started thinking that my mother’s plum cake was better than that. And then I realized that I still didn’t have her recipe! So she emailed it to me and I made it the following week. It’s perhaps not as good looking, but take my word for it, it is better. It was once thought that my sister and I didn’t like it, but that’s only because during plum season, my mother would serve it once a week, so by the fourth week, we were understandably a little tired of it. Just don’t overdo it.The recipe is adapted from Anne Lindsay’s The Lighthearted Cookbook. My mother replaces the cinnamon with nutmeg and uses fresh plums instead of canned. That’s the way I’ve made it, and I love it, but I now think you could use a mix of nutmeg and cardamom. It comes with the option of a glaze, but I like it au natural. The cake isn’t too sweet, but is moist and flavourful. You can also make it with peaches, apples or pears. And take it from me, you don’t even have to separate the eggs. The number of plums you’ll need depends on their size; you need enough to cover the surface of and 8-inch square pan once they’re halved. Enjoy! 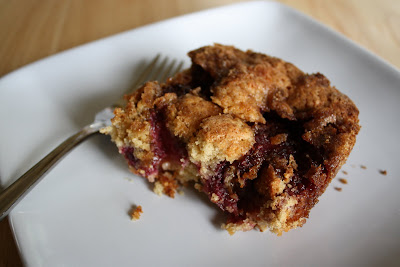 For the streusel topping
½ cup packed brown sugar
1 Tbsp soft margarine
1 tsp nutmeg (or cardamom or, if you really must, cinnamon)

For the cake
Preheat the oven to 350 °F. Grease an 8-inch square cake pan (a 9-inch square pan or springform pan will do too).

In a large bowl, cream together margarine, sugar and egg yolks until fluffy. Combine flour and baking powder; beat into egg mixture alternately with milk.

Beat egg whites until stiff but not dry; fold into batter. Turn into prepared pan.

Halve and pit plums and arrange over top.

For the streusel topping
In a small bowl, combine brown sugar, margarine and nutmeg; mix well and sprinkle over fruit.

Bake for 35 to 45 minutes or until top is golden and toothpick inserted into cake comes out clean. 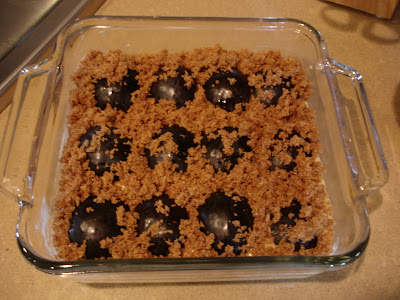 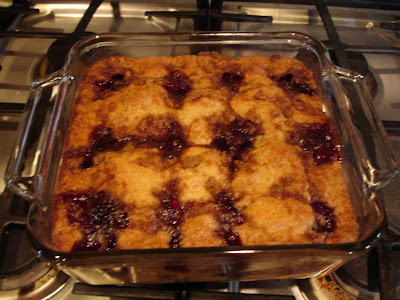 I made it yesterday using two apples, two pears and one plum and it was delicious, but not as easy because you have to peel the apples and pears at the last minute.