I got this pattern from Sew Everything Workshop, by Diana Rupp. It’s a wonderful book that I’m using to learn how to sew; it’s full of great explanations and has some really nice patterns as well. This one was pretty easy; you trace your own pattern in one of three sizes and stitch it together, with a little gathering on the top piece. I used Swedish tracing paper as pattern paper, which I recommend: it’s thicker than regular pattern paper and is therefore more resistant – you can even use it as muslin and sew with it directly to see how the finished garment will look!

Apart from the initial investment of the book (which I’d buy again tomorrow if I lost it) and the pattern paper (which isn’t too expensive, and there’s plenty on the roll), this project was free. I used the leftover fabric and thread from my dress and had just enough. In the picture below, take into consideration that each long strip of pattern paper had to be cut twice. I have about a 12-inch square left, which I’m keeping in case I ever need it (to make a pocket on a tote bag, for example), but I consider that fabric used up. It was originally $4.90 a yard, though, and you need about 1 ½ yards of it. You also need a hook and eye closure for the back; I happened to have a shirt that I was no longer wearing and that had 10 pairs (!) of decorative hook and eye closures on the sleeves, so I put those in my notions collection, along with its three buttons. 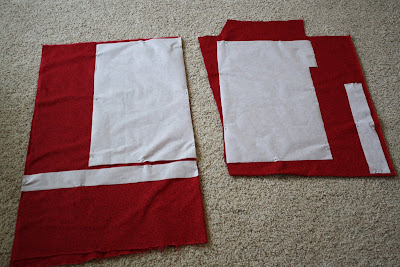 With the sturdy Swedish tracing paper I had, I was able to get a better idea of the finished size of the tank top, so I adjusted it a bit by shortening the top band. I also modified the pattern a bit to stitch the top band: either the original pattern had a typo, or the instructions were totally over my head, but what I did makes complete sense to me and gives a finished look to the garment, so I’m sticking with it. I shortened the hem by 3 inches as well, since the tunic look didn’t suit me. I was hoping I could wear the top as is, but since there’s a 6-inch slit down the back, I really do have to wear it over a t-shirt. I really like it, though, and it’s the first thing I make that I wear in public. I’m extremely pleased with it! 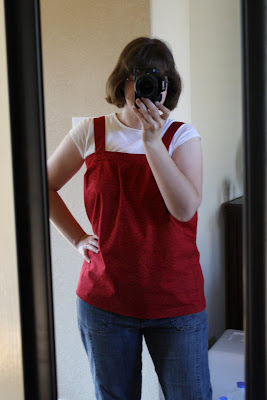 Congratulations on your finished top! Looks terrific. Thanks for posting, especially the part about the band. I went online in search of video or further instructions regarding this top. I, also, found the band instructions to be confusing. Your comment confirmed that I wasn't crazy and I will come up with my own work-around. Thanks again and happy sewing!!!