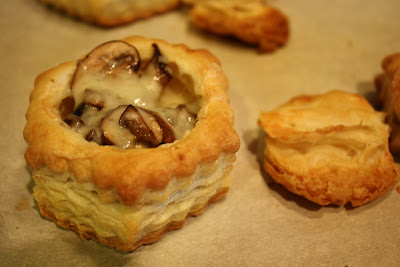 I got this recipe from Real Simple. These tarts really don’t require a lot of work (at least, not if you buy puff pastry instead of making it), but they are very satisfying and there’s room for improvisation. I couldn’t find puff pastry at my grocery store, so I ended up with puff pastry shells. This was a bad idea for two reasons: one, they were too small for the tarts, and two, you have to bake the shell in order for the pastry to pop up enough to be able to remove the top and fill them. But you see, the filling was supposed to go in before the crust was even baked! I ended up remedying the problem by baking the shells just enough to be able to fill them, then put the filled tarts in the oven for a little less time. For the leftover filling the second day, I toasted some sliced bread, then topped it with mushrooms and cheese and popped that in the oven. The Engineer and I both thought these tarts were fantastic, in either incarnation, and we even liked the mushrooms!

I used a mix of baby brown pearls and portabella mushrooms, but Real Simple also recommends button mushrooms, cremini, shiitake and oyster. I recommend Gruyère or Swiss cheese, as those are usually lactose-free, but feel free to experiment. You can also make these gluten-free either by making your own puff pastry (Gluten-Free Girl and Tartelette, among others, both have recipes on their blogs, which I’ve bookmarked but haven’t had time to make yet) or by using gluten-free bread or pie dough. Serve with a green salad (or, as on the last picture with the toast version of these tarts, with a stone fruit slaw).

Heat oven to 400 °F. Unfold the pastry and cut it into 4 squares. Place the squares on a parchment-lined baking sheet and, using a fork, prick the dough all over.

Meanwhile, heat 2 Tbsp of the oil in a large skillet over medium-high heat. Add the mushrooms and shallot and season with ½ tsp salt and ¼ tsp pepper. Cook, tossing occasionally, until the mushrooms are browned and tender, 4 to 5 minutes. Add the wine and cook until nearly evaporated, about 1 minute more.

Dividing evenly, sprinkle the pastry squares with half the cheese, leaving a ½-inch border on each. Top with the mushroom mixture and remaining cheese. Bake until pastry is golden brown, 20 to 25 minutes. 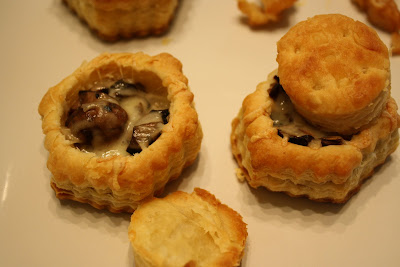 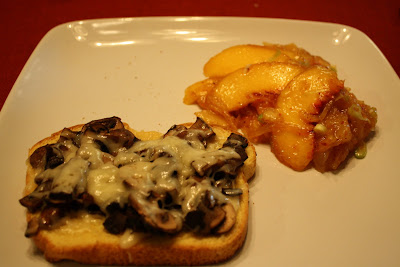