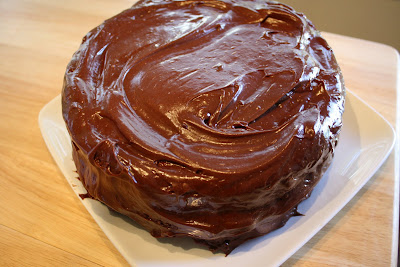 I wanted to find a really good yellow cake frosting (better than the first recipe I posted). I still do, actually. Smitten Kitchen’s post about this cake seemed very promising, but in the end, I didn’t like the cake. It tasted quite good, but felt very heavy and dense. I made my usual substitutions (all-purpose flour and cornstarch instead of cake flour, which I even measured by weight instead of volume this time, and margarine instead of butter), but other cakes come out fine, so I’m not sure if that was the problem. I’ll keep looking for a good recipe. 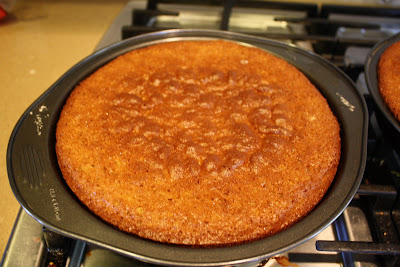 The frosting is what I’ll elaborate on here. I didn’t use sour cream, since I haven’t found a lactose-free one yet. I used Tofutti’s Better Than Sour Cream, which has the same consistency. It lacked the sour, tangy taste the original frosting must have had, but it was still very good. It held together just fine – as a matter of fact, once it’s on the cake, it doesn’t even need to be refrigerated to retain its consistency. There’s also hardly any sugar in it (some in the chocolate, plus a bit of corn syrup)! The recipe makes about 5 cups of frosting, enough for a 9-inch layer cake.

Whisk together the sour cream, ¼ cup of the corn syrup and vanilla extract until combined (I did this in the stand mixer, but I could see doing it by hand if I had to). Add the tepid chocolate slowly and stir quickly until the mixture is uniform. Taste for sweetness, and if needed, add additional corn syrup in 1 Tbsp increments until desired level of sweetness is achieved.

Let cool in the refrigerator until the frosting is a spreadable consistency. This should take about 30 minutes. Should the frosting become too thick or stiff, just leave it out until it softens again. 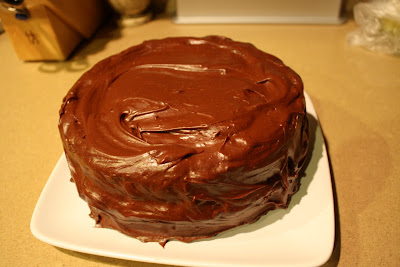 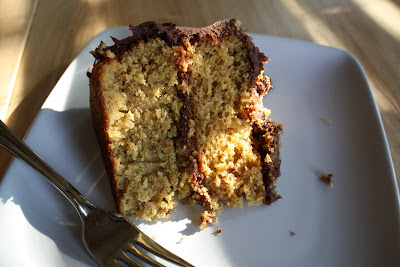 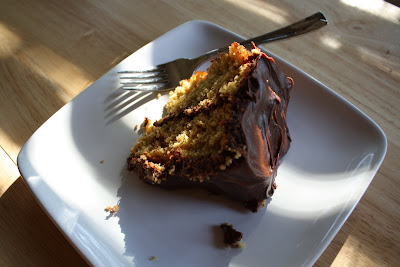 That icing does look very good!
The cake looks a bit dry and not too tender. I wonder why...

I'm curious, how much lactose is in sour cream and how does the amount compare with other types of "spoiled" milk like yogurt and creme fraiche?

Your guess about the cake is spot-on. I baked it less than called for (though it was ready when I pulled it out of the oven). I admit I put it in the fridge at one point, but even before that it seemed a little bit off.

Baking Illustrated has a yellow cake recipe, so I'll let the Engineer make that and see how I like it (I think he'll get around to it this fall).

No cake until the fall?!?
Intolerable!

We'll give you cake next time we see you.
BTW, come back to Montreal already!