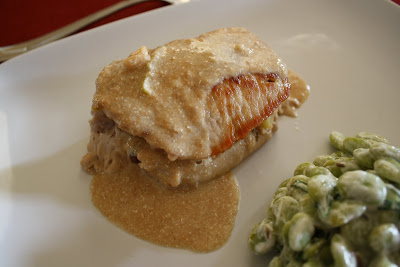 This recipe is based on one from The I Love Elvis Cookbook, which I bought probably not too long after it came out. Mind you, none of the recipes in here are actually Elvis recipes; they were just inspired by him. The book is divided in several sections to coincide with Elvis’ life path, and this recipe is from the first section, “They call me poor boy”, full of Southern recipes that might resemble what the Presleys ate. In this case, the head note does state that pork was not an everyday food for poor families, but Elvis loved pork chops. The meat was probably battered and fried when his family could afford to buy it it, but this version is more upmarket and is stuffed with peanuts, another Elvis favourite.

I happened to have a bag of raw peanuts on hand that I wanted to use up, and this seemed like the perfect opportunity to finally try that recipe. I had more bread and peanuts than called for, so I compensated with a bit more oil. I used butterflied pork chops instead of 1-inch thick loin pork chops, so I cooked them less and ended up with a lot of left over stuffing, which I froze for future use. I used a mix of soy and coconut creamers instead of cream, but had too much liquid in my sauce: I’ll use less next time, or let it reduce more. I added a bit more peanut butter this time to help the consistency. I really liked the finished product, though, and served it with lima beans with mint from the garden – it was the first time I used the herb garden. We also had blueberry cobbler for dessert, so it was a very Southern meal.

To prepare the stuffing, put the first 9 ingredients in a bowl and add about 2 Tbsp of the oil (I used truffle oil here, it was fantastic). Combine with a fork until well blended and the stuffing just holds together. Season and add a little stock or water if necessary.

Put the pork chops on a cutting board and trim off all but a very thin layer of fat. Using a thin, sharp knife, make a “pocket” in each chop by cutting horizontally into the center from the outer edge to the bone, trying to keep the cut centered. Using a spoon, divide the mixture evenly among the chops.

In a heavy-bottomed frying pan or skillet, heat 2 Tbsp of the remaining oil (here, I used canola) over medium-high heat. When the oil is very hot, add the chops. Cook for 1-2 minutes. Turn the chops and cook for another 1-2 minutes, until just browned. Remove to a plate and set aside.

In the same pan, add the chicken stock, water, or apple juice and stir to scrape up any browned bits on the bottom. Bring to a boil and skim off any fat or foam. Reduce the heat to low and return the chops to the pan. Cook, covered, for 25-30 minutes, until just cooked, basting occasionally.

Remove the chops to a serving dish and keep warm. Stir in the cream and peanut butter. Increase the heat to medium-high, bring to a boil, stirring constantly. Pour over the chops and serve. 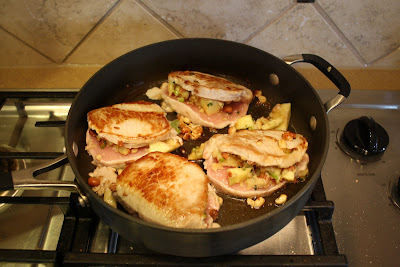 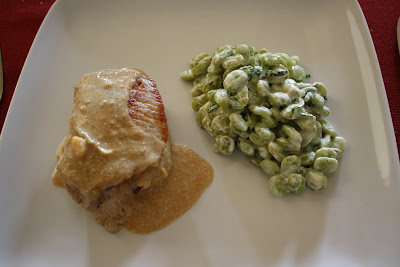