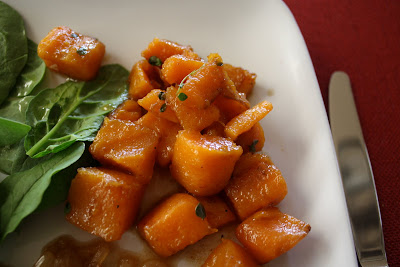 This recipe is adapted from one published in the November 2010 issue of Bon Appétit. I added fresh thyme from the garden only at the very end of cooking. I urge you to use real butter here, you won’t regret it. I “cheated” and used a bag of pre-cut squash from the refrigerated section, but it cut way down on prep time and avoided leftovers. As a result, it did increase the ratio of other ingredients in regards to squash, but the end result was absolutely delicious. It stole the show from the duck served alongside it. The braising got all the flavours into the butternut squash, not just in the sauce. I may have said I was “in love with that squash”, and even the Engineer liked it and compared it to candy. 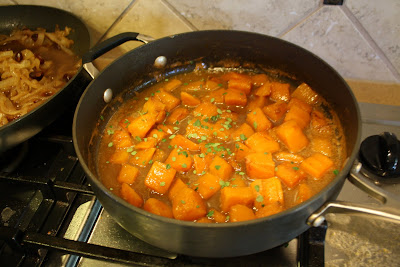 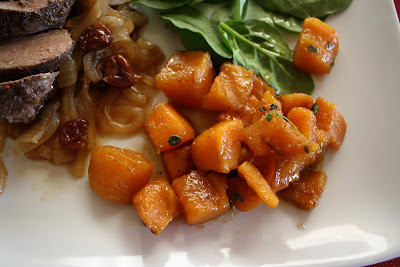 You can still get real maple syrup down there? Or did you bring it with you when you left Montreal?

The recipe looks great and I'll try to convince Jen to try it soon, especially with frozen squash.

I should have read your next post first! You already answered my question!

I think I know what you'll be stocking up on in Vermont.

Actually, I'm French-Canadian, and there are a few maple syrup producers in my family. If I can't get syrup from them, I'm buying some in Quebec. I know that Vermont and Quebec have very similar climates and that Vermont is known for its syrup, but for me it's Quebec syrup all the way. :)