Back in the sewing of things

I said before that I would be making a dress, and it was no April Fools’ joke. It took me longer than expected mostly because I had to put the project on the back burner for a while. I decided to have an anti-procrastination burst of motivation (first a weekend, then a week), and ironically, that got me procrastinating on the sewing. What happened was that the anti-procrastination involved, in part, tackling a small home improvement project: we had a nook in which we had put two bookshelves and, obviously, our books. But the shelves left a lot of wasted space in there, and they were not solidly bolted to the wall. So we ended up having a carpenter make a built-in bookshelf, which I then painted to match the original trim. While that was going on, all the books were piled up in the sewing room, and there was no space to work in there. The end result with our bookshelf was totally worth it, though; it fills me with joy every time I look at it! I then got back to sewing and finished the dress. 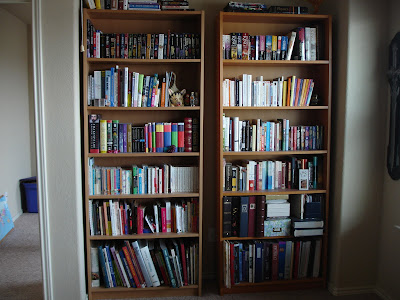 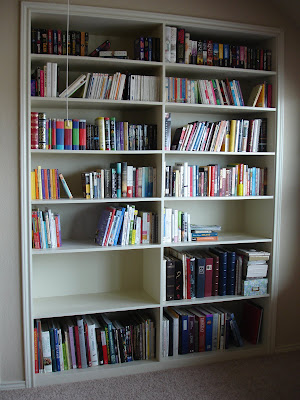 I used a pattern from Simplicity and got my supplies at Hobby Lobby. I got 7 yards of a nice cotton print on sale at $4.90/yard (same price as the 2.5 yards I got for the napkins); the saleslady seemed to think that was an inordinate amount for a single dress, but I wanted to make sure not to run out, and I’m glad I got that much because as you can see below, I didn’t have much left over after all my pieces were cut. Hobby Lobby sold all Simplicity patterns at $0.99 a piece (I don’t know why they seem to be between $10 and $15 elsewhere); I also bought two spools of thread and a zipper. Total price: $48.85, plus taxes. 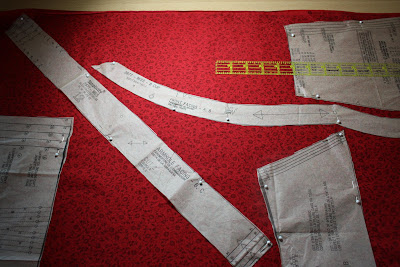 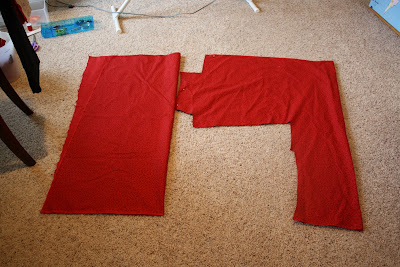 There are parts of the dress that didn’t turn out so well, like where the collar meets the front as well as the armholes. I also made a few mistakes, like not measuring myself properly: I had to take in the sides of the top not once but twice, about 3-4 inches in all (so using the seam ripper on the side seams and armhole facing, then starting that part over). I should probably have taken in the front part as well, but that was way more complicated and I didn’t want to get into it (I’ll have to live with the poor fit on this one). That’s why I needed the second spool of thread, but I’m sure an experienced seamstress would have needed only one. I was aware that it might be a smidge big, but I way overshot; it’ll teach me to measure properly, with the right bra, next time. Putting in the zipper was quite an ordeal! I’m not entirely pleased with all the hems, either. But for a first project (well, first clothing from scratch, third project in all), it’s just fine. I love the fabric I chose, and I do love the full skirt with godets! I really enjoyed sewing and I already bought more Simplicity patterns to make shirts. I think the only reason it doesn’t go as fast as knitting is that I have to dedicate time exclusively to it, whereas I always knit while watching television, which I do a few hours each day anyway. 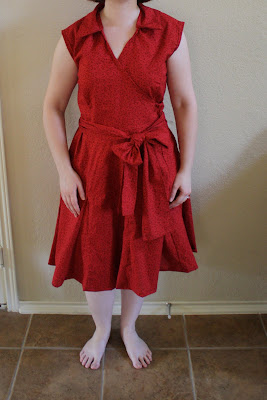