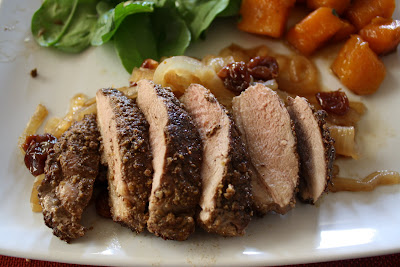 This recipe, originally titled “Duck with Cherries, Spinach and Pine Nuts”, was published in the December 2010 edition of Bon Appétit, but is not available online. It’s from a restaurant called Fornino in Park Slope, Brooklyn. I omitted the pine nuts entirely, because all I could find were pine nuts grown in China, and I’m still avoiding those. I also served the spinach raw, because I don’t actually like wilted leaves and I had three pans on the stovetop already, but you’re free to do as you wish.

I was lucky enough to find magrets de canard the last time we went to Central Market – they are all over the place in Quebec now, but since I moved here, I hadn’t seen anything but whole frozen ducks, and for someone who’s used to eating them on a regular basis, this has been hard. (I also miss pita bread: it’s not something that I really had often, but I’ve only seen them once here; any store has 93 kinds of tortillas, though! And next time I’m in Canada, I’m bringing back cans of maple syrup. What they have here is either not the real thing, or is the real thing but at an outrageous price.) I really loved the duck, and the mix of spices here was unexpected but harmonious. I’m used to making duck breasts with something sweet, or serving them with something sweet. This recipe took me a little out of that comfort zone, but not so far that it was unfamiliar territory. There’s nutmeg, like I’m used to, but also cinnamon, cloves, aniseed and fennel seeds, which go quite well with it. I loved the onions and cherries on the side! I also served it with maple-braised butternut squash, which I have to admit stole the show. 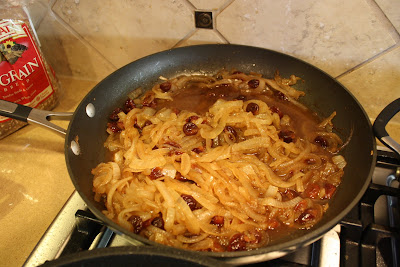 For the duck
Finely grind fennel seeds and aniseed in spice mill; transfer to bowl. Whisk in pepper, cinnamon, nutmeg and cloves.

Using a sharp knife, score duck skin diagonally to create ¾-inch diamond pattern (do not cut into meat). Sprinkle both sides of duck with fine sea salt and spice mixture. 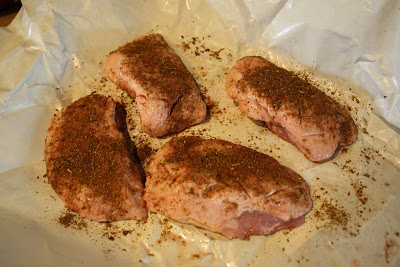 Heat a large heavy skillet over medium-high heat. Add duck, skin side down, to skillet. Cook until skin is browned and crisp and fat is rendered, about 7 minutes. Spoon off some fat from the pan. Turn duck over; cook until browned and cooked to desired doneness, about 3 minutes for medium-rare. (I always cook it longer than that, and most of the cooking is done skin-side down.) Transfer to a plate; tente with foil. 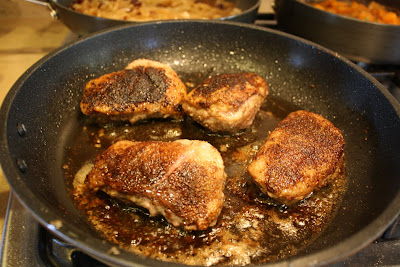 Meanwhile, whisk 3 Tbsp of butter into sauce. (I swear I just now saw this instruction, I completely omitted it when I made it. I stopped reading at this paragraph, since I wasn’t cooking the spinach. Oh well, then it really is lactose-free!) Season sauce with salt and pepper. Melt 1 Tbsp butter in heavy large pot over medium heat. Add spinach and garlic. Sprinkle with salt and pepper; toss until wilted, about 2 minutes.

Slice duck breasts. Divide spinach among plates. Place 1 sliced duck breast atop spinach on each plate. Spoon sauce over; sprinkle with toasted pine nuts. (If you are avoiding nuts, you could replace them with sunflower seeds, or omit them entirely.) 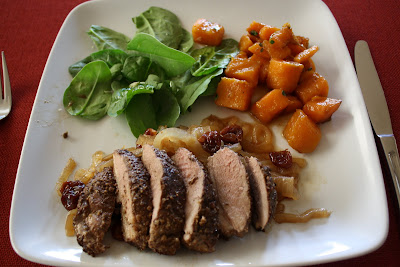