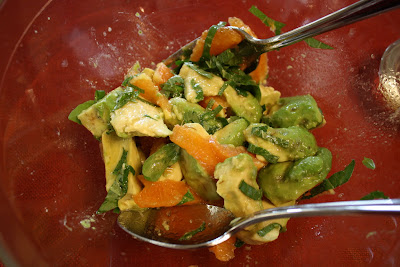 This is more of an idea than a recipe. I got this idea last summer in a Real Simple magazine and wrote it down because it sounded good. I only now got around to making it as a side dish, but I’m going to keep this idea, as I really like it.

Originally, it was for a salad made with avocados and oranges, grapeseed oil and fresh dill. But when it came time to make it, I really didn’t feel like dill. I wondered whether mint would work, since I have a bunch in my garden. I took a look in The Flavor Bible, which didn’t say anything about avocado and mint, but it did confirm that mint goes well with orange. It also says that basil goes with both. So I ended up with an avocado and orange salad, tossed with grapeseed oil as well as basil and mint from my garden. And it was SO good! It’s the perfect summer dish.

I used 2 bruised avocados (so some parts of them I didn’t use) and 3 small oranges, one of which I juiced into the bowl, then liberal amounts of the other ingredients. It was enough for generous 2 servings as a side dish. I recommend you play around with this idea on your own! 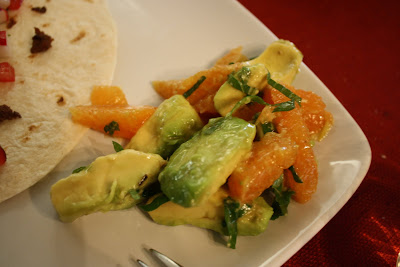