More knitting from the stash

I did my best to use up some more yarn in my stash before starting another large project. I had one last skein of yarn from the Alaskan Yarn Company - it’s a sock yarn, and I believe the colorway is Denali Autumn (it looks like this). I decided to make the Sockhead Cowl, because a) the pattern was free, and b) it uses up the whole skein. At first, I wanted to make it slouchier, so I cast on more stitches than called for, but I then decided that it didn’t work. I had made enough ribbing on the first edge to satisfy me (on the right in the photo below), but then there wasn’t enough yarn to finish it symmetrically, and the stockinette part was too short as well. Plus, the way the colors lined up with my variegated yarn wasn’t pleasing. 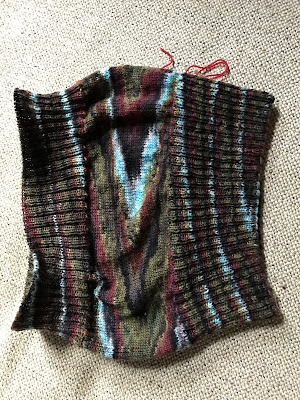 So I cast on again with the number of stitches called for in the pattern, and it turns out it isn’t as tight as I feared, so that’s a relief. The color pattern still isn’t my favorite when it’s laid flat, but it’s better than before, and anyway it doesn’t lay flat when I wear it, so there’s that. I also learned new techniques for casting on and binding off, in a way that makes the edge particularly stretchy, and I love learning a new trick when I knit. The rest of the pattern was pretty mindless, perfect to do when watching television. I think I’ll wear this cowl when I go to Canada for the holidays! 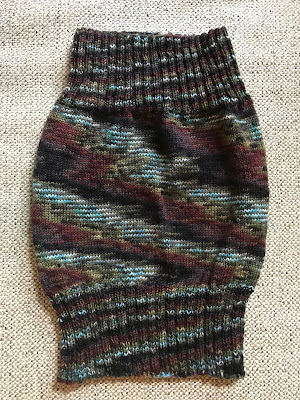 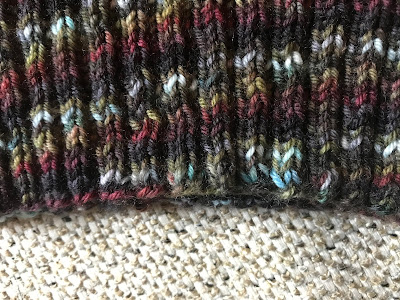 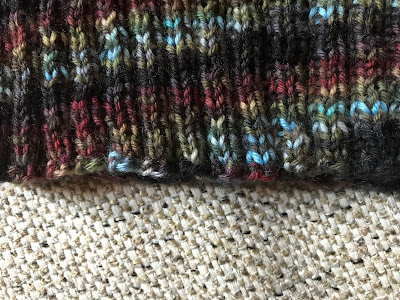 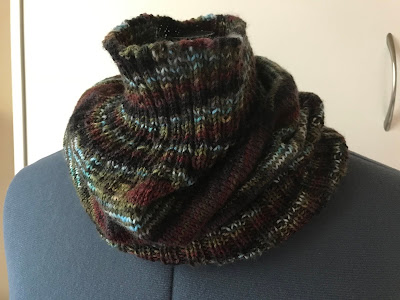 Then, I had to finish up my two skeins of green Rowan yarn, and I couldn’t find any pattern I liked. I decided to buy two skeins in a coordinating color (green teal) so that I could make the Tide Pools sweater in size 4T. I thought that if I changed the stripes pattern a bit and alternated 2 rows of each color, instead of 4 rows in the main color and 2 rows in the contrasting color, I’d have enough yarn. This is knit top down, so once I had finished the body, I knit up the collar and button bands in the main color, then weighed what I had left in order to divide it evenly between the sleeves. Well, I had a measly 11 grams left in my main color! 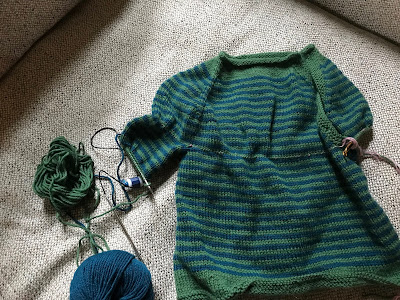 I figured I’d switch things up and use the contrasting color to knit the sleeve edges, but even then, the first sleeve was so short after using up 5 grams of the green that I knew I wouldn’t be happy with the sweater. I needed to get more green yarn, or frog it and start over in a smaller size. I sent an email to Jimmy Beans Wool, where I buy most of my yarn, and asked whether, by any chance, they still had a skein if green yarn left from the same dye lot. And miracle of miracles, they did! So I bought it and was able to complete the sweater, with long sleeves and green sleeve edges. I’m happy with how I did the color switch in the round, and hopefully it’ll show even less after a proper blocking. (The buttons were left over from the Gramps Cardigan.) I still have a bit of green and green teal left, so I’m adding that to the stash and hopefully I’ll get around to making fairisle hats one day! 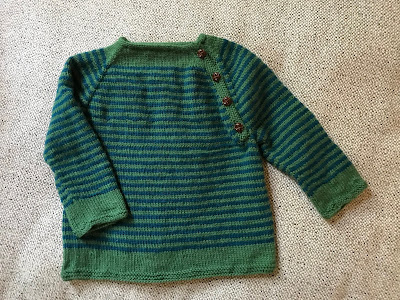 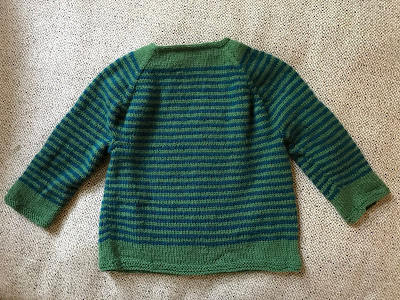 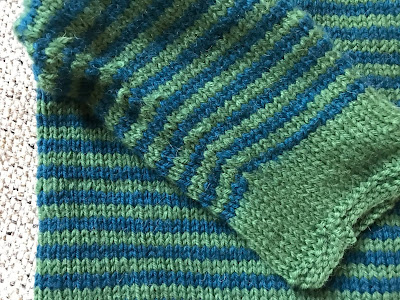 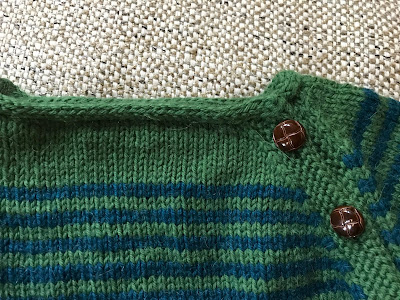