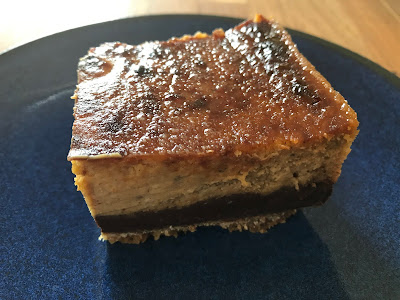 I made several “seasonal” desserts at the end of the summer and in the early fall, but none of them was good enough for me to make a post out of it. A decent berry and buttermilk cobbler, a raspberry buttermilk cake that didn’t look like the photo at all, a blackberry lemon cake with white chocolate and olive oil (in which, sadly, I couldn’t taste the white chocolate), another peach tart with date almond crust similar to these (it was fine, and I seriously considered posting it today with the title “Impeachment Tart” but I got a hold of myself). Then a single crust plum and apple pie that was just meh. 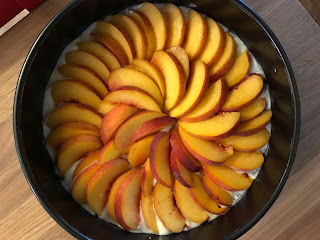 The Little Prince then asked random questions about cheesecake and the various flavors one could use to make it. I realized I had a recipe for crème brûlée pumpkin cheesecake bars, which also have chocolate, so I decided to try those. I don’t have a blow torch (and I refuse to buy such a unitasking tool), so I broiled them a few minutes. I think I got the effect that was intended, but next time, I would prefer them un-brûléed, especially considering that the cheesecake isn’t exactly like a crème brûlée custard in the first place. And that's why I changed the title. I really liked this dessert, as did the kids; the Engineer had to scrape off the top to be able to eat it, as he dislikes caramel.

The original recipe had plain melted chocolate between the crust and the filling, but I knew that once in the fridge, that layer would become way too hard. So I used my peanut butter chocolate pie recipe as inspiration and added some milk to it – my version is below.

For the brûlée topping (optional, see above)
¼ cup granulated sugar

For the crust
Preheat the oven to 350 °F. Line an 8”-square baking dish with foil, leaving an overhang.

In the bowl of a food processor, pulse the graham crackers until finely ground. Add the butter and pulse until moistened. Press into the bottom of the prepared pan. Bake until lightly browned and set, about 8 to 10 minutes.

Meanwhile, melt the chocolate with the milk and mix well (I did this in a double boiler).

Remove the crust from the oven and spread the chocolate mixture on top evenly. Let cool and reduce the oven temperature to 300 °F.

For the filling
Place the cream cheese in a clean food processor bowl and pulse until smooth (you can also use an electric mixer). Add the sugar, pumpkin, eggs, egg yolk, vanilla, flour, salt, and spices and pulse until combined and smooth. Do not overmix.

Pour the mixture into the prepared pan. Bake until the cheesecake is set but still slightly jiggly in the center, about 45 minutes (I left it in there an extra 25 minutes). Do not overbake.

Place the cheesecake on a cooling rack to cool completely in the pan. Cover and chill until firm, at least 2 hours. Using the foil overhang, transfer the cheesecake to a work surface and use a big sharp knife to cut into squares (I used the broiler instead of a blowtorch in the next step, so it made more sense to me to leave the whole thing in the pan).

For the brûlée topping
On a heat-safe work surface, sprinkle the top of each square with sugar and torch until it turns a deep amber color. Alternatively, use the broiler to brown the sugar (I used it for 5 minutes). Refrigerate until ready to serve. 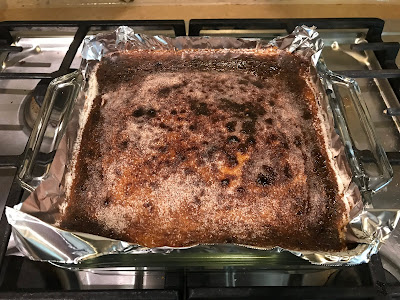 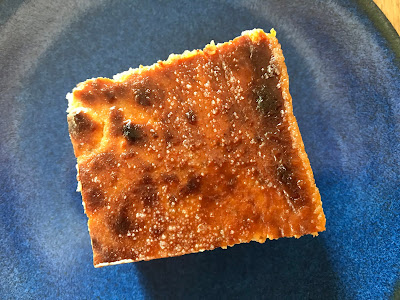 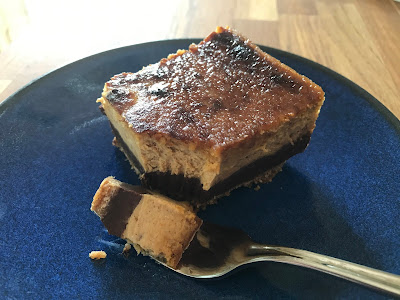