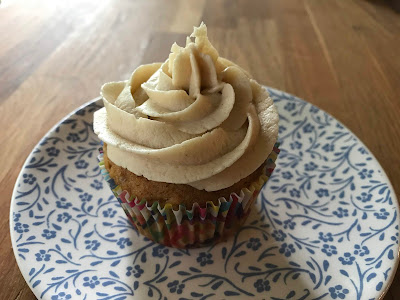 As you know, fall in Texas doesn’t feel like fall at all, so sometimes the only way to get in the mood, so to speak, is to make food that I associate with fall. These chai sweet potato cupcakes are a perfect example. I don’t have chai tea on hand, so I changed the recipe (the spice mix below is mine). The original recipe was for 24 cupcakes, so I halved (below) it and ended up with 9 cupcakes (note that you might want to increase the frosting recipe by 50% if you like your cupcakes frosted generously; I didn’t have enough to make all 9 look like the one shown here).

These were delicious! We all liked them very much. I used homemade sweet potato purée (my preferred method is roasting in foil at 425 °F for 1 hour, then mashing), though the recipe specifies that you could use canned sweet potato purée, and I see no reason why you couldn’t also use pumpkin or squash.


For the chai syrup
Combine the water, sugar, and spices in a small saucepan. Heat over medium heat until mixture starts to bubble and sugar dissolves. Simmer over low heat until mixture has reduced by about half and has become syrupy. Strain and set aside to cool (discard solids).

For the cupcakes
Preheat the oven to 350 °F and grease or line a muffin tin with paper liners.

Whisk together the flour, baking powder, salt, and spices in a small bowl.

In the bowl of a stand mixer, combine the sugars and grapeseed oil. Using the paddle attachment, mix on medium speed. Turn mixer to low and add in the eggs, chai syrup, and vanilla. Stop mixer and scrape down the sides and bottom of the bowl.

With the mixer on low, add the dry ingredients in two batches. Mix until just combined. Fold in the puréed sweet potato.

Divide mixture between the wells in the muffin tins (I got 9); do not fill more than 2/3 full Bake for 20 to 23 minutes or until a toothpick comes out clean when poked into a cupcake. Cool completely before frosting.

For the frosting
Place the butter in the bowl of an electric mixer. Using the paddle attachment, mix until smooth. With the mixer on low, gradually add in the remaining ingredients. (I like to add the liquids first, then add powdered sugar until I get to the right consistency.) Once combined to your liking, turn the mixer up to medium and mix for a few minutes until smooth and fluffy.

To assemble, transfer the frosting to a piping bag and frost the cooled cupcakes. Alternatively, spread the frosting on the cupcakes with an offset spatula. Dust with a pinch of cinnamon (I forgot). 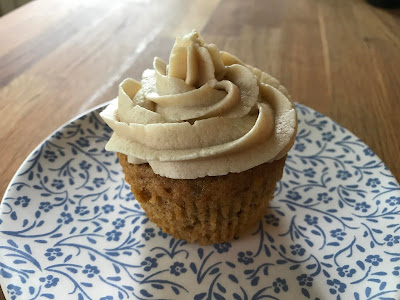 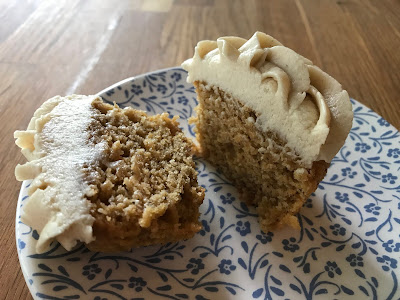