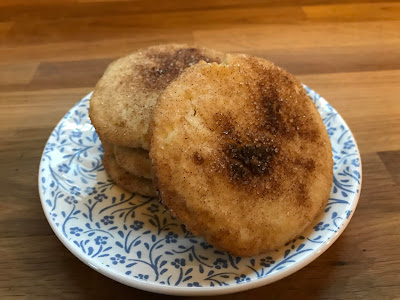 I didn’t grow up with snickerdoodles, in part because they are largely unknown to francophones (or at least, they were when I was little), and in part because my mother hates cinnamon, so these are the last thing she would have made. But then there was an episode of Spilled Milk about them, and they talked about the Serious Eats recipe by Stella Parks. It calls for coconut oil instead of the typical shortening, which certainly tastes better. I don’t have lactose-free butter in the States, so I used Earth Balance butter. And I made them with ground Ceylon cinnamon, because I was a bit too lazy to grate my own cinnamon. But we all loved these cookies! They were absolutely delicious, and very addictive. It turns out the Little Prince is particularly fond of cinnamon, so this was a special treat for him. I’ll be making these again!

I’m leaving all the super precise weight measurements in there because Stella Parks obviously went through a lot of trouble to develop a precise recipe, but I measured some things by volume only (like the baking powder, vanilla, or egg).

For the cookies
Adjust oven rack to middle position and preheat to 400 °F. Line a baking sheet with a silpat or parchment paper.

Combine butter, coconut oil, sugar, salt, baking powder, and vanilla in the bowl of a stand mixer fitted with the paddle attachment. Mix at low speed to combine, then increase to medium and beat until soft, fluffy, and pale, about 5 minutes, although the exact timing will vary. Halfway through, pausing to scrape the bowl and beater with a flexible spatula, and then resume mixing on medium speed. Add the egg and continue beating until smooth. Reduce speed to low, add flour, and mix to form a stiff dough.

Using a cookie scoop, divide dough into 2-tablespoon portions. If you like, these can be transferred to a zipper-lock bag and refrigerated for up to 1 week, or frozen for up to 3 months; soften to about 68 °F (20 °C) before baking.

For the cinnamon sugar
Mix sugar with ground and grated cinnamon in a small bowl, adding more spice if you prefer. (It should taste very intense, to offset the mild dough.) Roll each portion of dough into a smooth and sticky ball, then tumble in cinnamon sugar until fully coated. Arrange on a baking sheet, leaving 2 ½ inches between balls, then flatten into 2-inch disks about ½ inch thick. Generously cover with the remaining cinnamon sugar, creating a thick layer that will crack and crinkle in the oven. (I made a total of 20 cookies, so I baked half at a time and made sure to save half the cinnamon sugar for the second batch.)

Bake until the snickerdoodles begin to spread, about 5 minutes, then reduce temperature to 350 °F. Continue baking until firm around the edges but steamy in the middle, about 6 minutes longer (5 in my case, to get perfectly chewy cookies). Cool directly on half sheet pan until the crumb is set, about 8 minutes. Enjoy warm, or store in an airtight container for up to 3 days at room temperature. 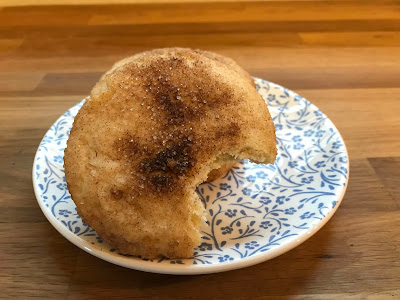 We are snickerdoodle fans here, but the fact that they are traditionally made with cream of tartar usually gives them a distinctive metallic aftertaste that I'm not always in the mood for... Stella Parks takes her baking seriously, so I am definitely going to put this recipe in the queue!