F*ck it, this is my meatloaf

So, I’ve been trying to make a meatloaf of which I can be proud, to no avail. I started with my grandmother’s recipe, which my mother makes as well. It’s always been good, but when I make it, it falls apart when I slice it, even when I use 2 eggs instead of 1 (as my grandmother and mother recommend for this specific reason). So eventually I tried this recipe from Pip & Ebby, called “Best Ever Meatloaf.” It specifically calls for lean meat (90% lean), there’s apricot preserves in the sauce, and the panade is made with Ritz crackers. Are you sold yet?

It was absolutely delicious, but it *still* fell apart, even though I was careful to let it rest 15 minutes after baking, as the recipe recommended. So I made it again, increasing the panade slightly (from 2 dozen Ritz crackers to a whole sleeve, which is just easier) and using fattier meat (85% lean, 15% fat) to help keep it together. This time, I had to drain the meatloaf at the halfway point in the baking time, before topping it with the sauce. It was delicious, but still crumbled. I mean, after spending a day in the fridge, it was fine, but who wants that? I *could* make it a day ahead, but I feel like a meatloaf recipe should be eaten the day of, warm from the oven. 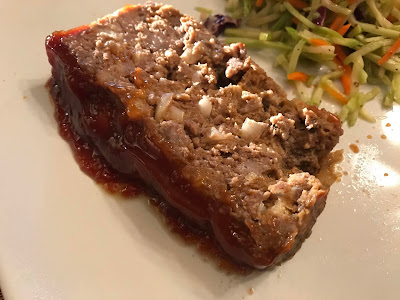 I read refresher articles like how to make meatloaf (it’s not rocket science!), listened to Spilled Milk’s episode on meatloaf, guest-starring J. Kenji López-Alt, and then I read his recipe on Food Lab. I also used Google to find this detailed article on how to keep meatloaf from falling apart: knead the meat but not too much, salt properly, use panade, add an egg, pack it more tightly in the pan, let it rest after baking – I do all of that – then use gelatin and use different types of meat, like pork, which has more myosin.

So I halved the amount of milk in the panade and added gelatin to it, still using 85% lean beef and adding parchment paper in the pan. The meatloaf was better, especially after a day in the fridge, but still too crumbly (my notes include the acronym FFS, to give you an idea of how annoyed I was). Last week, I made one last try, using 90% lean pork and 90% lean beef in a 50-50 ratio. I made the mixture in the morning and let it rest in the fridge all day before baking it. Here’s the verdict:

This is how I will make my meatloaf from now on. It’s not perfect, but it is certainly good enough! The slices were a bit fragile, but held together, and I’m satisfied with it (especially considering that I had forgotten to line the pan with the gorram parchment paper, so unmolding was tricky). Without further ado, here is my recipe, adapted from Pip & Ebby.

Preheat oven to 350 °F. Grease a 5”x9” pan; line it with parchment paper, leaving an overhang on 2 sides, and grease again. Set aside.

Sprinkle the gelatin over the milk, mix a bit, and set aside for 5 minutes.

Pour the mixture into the prepared pan and spread evenly. Place the pan on a rimmed baking sheet and bake in the preheated oven for 1 ½ hours. 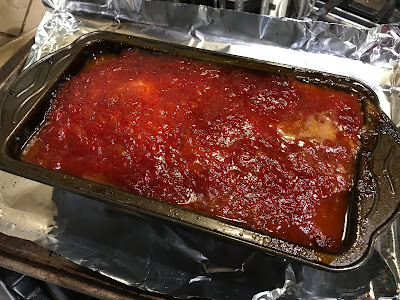 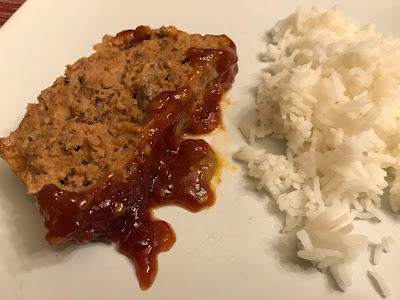