While I was looking at my stash again after the holidays, I realized I had 3 skeins of Debbie Bliss Baby Cashmerino Yarn in Mallard, I believe (otherwise it was Sapphire, I can’t quite remember). This was *just* enough to make a sweater for the Fox before he outgrew it, so I had to get to work! I knit a stripy number by Sirdar, using leftover blue yarn from two previous projects for the stripes on the sleeves. I only have a few yards of the teal blue left, everything else was used up to the very end. I used 3 buttons from my stash for the shoulder closure, and I really love the finished sweater! 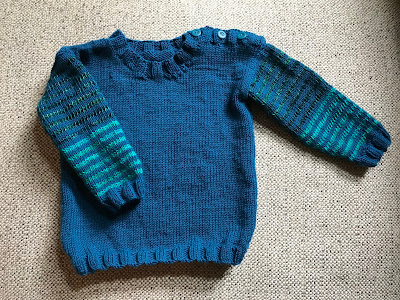 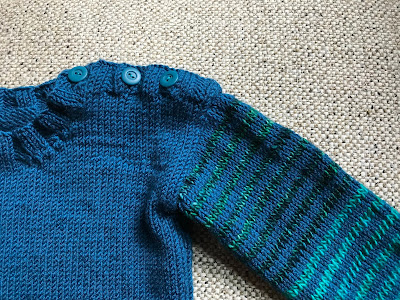 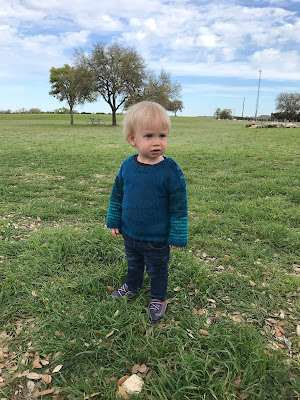 Then I set about knitting the famous Gramps Cardigan for friends who have just adopted their third child – a boy, this time. I’d been meaning to knit this for a while, too! I unfortunately didn’t have enough yarn on hand to make it, so I had to buy some. I chose Rowan Alpaca Soft DK Yarn in Clover, and lovely buttons on Etsy. I knit the 4T size and used up 4 skeins; I still have 2 skeins left, though. The window to return them has closed, so I’m thinking the only thing to do with them is a sweater vest for the Fox – there isn’t enough yarn for something bigger, but there’s definitely too much for a hat. I actually got the Fox to model this sweater, even though it’s too big for him, but I love it! That being said, if I ever make it again, I’ll follow this advice and switch the directions of the cables on half the sweater, so that the left front and sleeve mirror the right front and sleeve (instead of all the cables going in the same direction as the pattern calls for). I washed it and blocked it for the last photo before sending it off in the mail. The boy’s oldest sister is wearing it now, and she’s 5 years old, so the size is pretty forgiving! 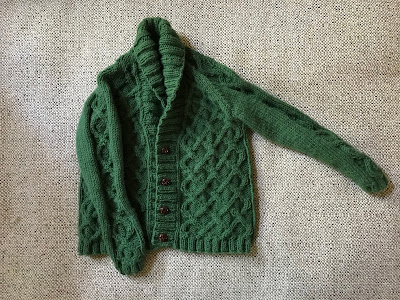 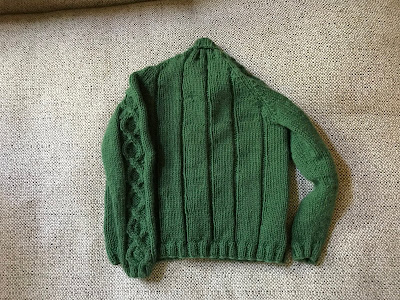 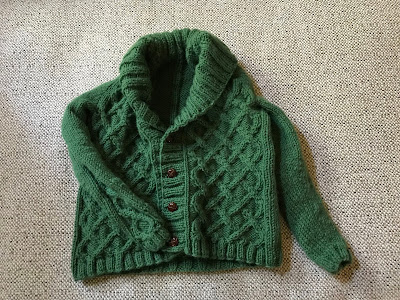 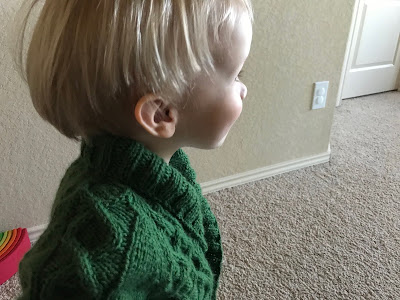 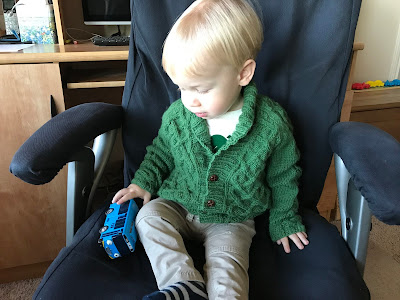 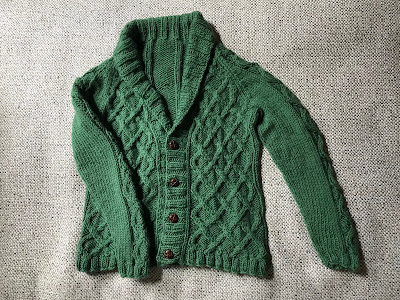 At this point, I was keen to use up some of the yarn I had bought in Alaska, at Aurora Yarns. I started with a skein of bulky yarn by The Alaskan Yarn Company in a colorway called Parpika, I think. I knew I had about enough for a hat, so I decided to make the Brioche Hood Hat. And I was almost done with it when I ran out of yarn! You see, brioche stitch takes up more yarn than stockinette, so I would have needed more yardage, even though I had already made the ties shorter. There was no way to get another skein of the same dye lot, obviously, and I decided that this variegated color looked batter in stockinette anyway. I didn’t want to buy a new pattern, so I tried making a Beehive Hat. The first one I made was too big, and the second was the right size but something wasn’t quite right about it. So I searched the internets and decided to make the Cocoon Hat. This time, finally, I liked the result, and had just enough yarn. (That’s one of the cool things about knitting – if you don’t like the finished product, you can often salvage the yarn and just start over, unlike, say, sewing). I think this one suits me better than the last one I knit in this style. 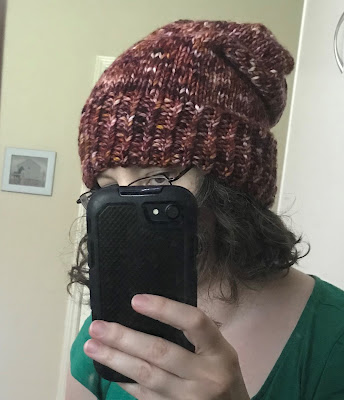 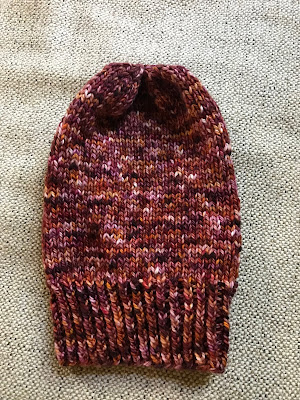 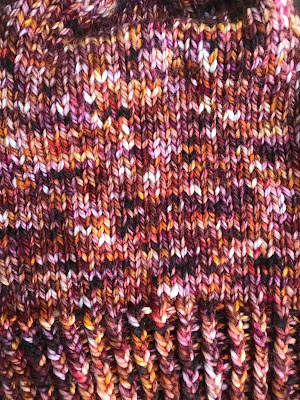 So after knitting the equivalent of 4 hats, I decided that I really did like the Brioche Hood Hat and wanted one after all, so I bought a skein of Malabrigo Rios Yarn in Teal Feather. It has just enough yardage for this hat – I ended up with something like 6 inches left over. The construction is not intuitive; there are a lot of short rows, making up wedges, and the short side will be the top of the hat. There’s a seam for the side at the end. I think I only got 12 wedges out of my yarn, yet it was big enough for my above-average-sized head. I had some trouble styling it, though, but after seeing this and this, I think I’ll use up those last 6 inches to sew up the rest of the side seam, eliminating the keyhole opening, and knot the ties on the opposite side. 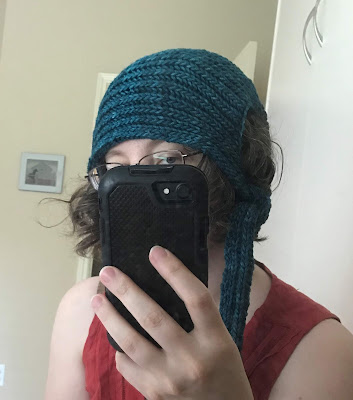 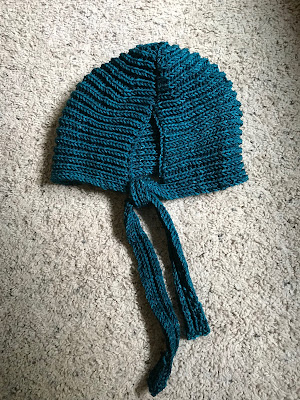 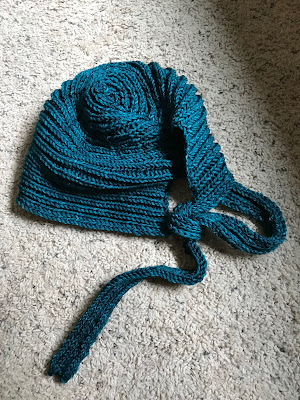 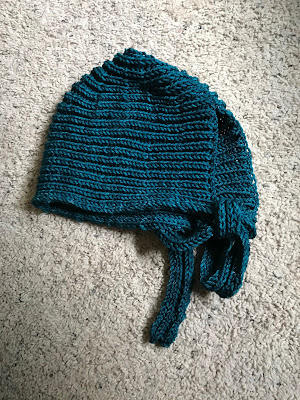 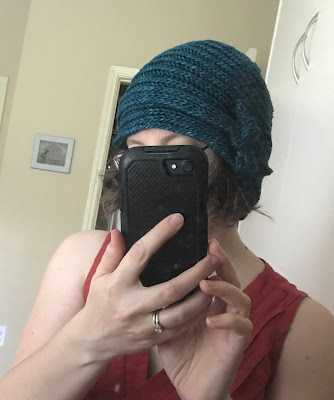 I’m now back to knitting a sweater-vest, and God willing, I’ll be able to post about that at the end of the summer!