In early June, my mother-in-law treated our little family to a vacation – a cruise to Alaska, for which her sister joined us. We took the opportunity to spend a few days in Vancouver, and we had such a wonderful time!

It wasn’t our first time in British Columbia, but the kids had never been. We took them to Science World, which was absolutely fantastic! It’s a great science museum for kids and grown-ups alike, with interactive exhibits on lots of different topics both indoors and outdoors – though I think my favorite was Eureka. You could easily spend most of the day there, and as a bonus, there’s a great playground right next to the parking lot.

Of course, no visit to Vancouver is complete without walking in Stanley Park! We also went on the Stanley Park Train and had lunch at Stanley’s Bar & Grill. We had originally planned to hike in Stanley Park and see the giant redwoods, but this proved too difficult given short legs, strollers, and the distance we would have had to cover in addition to the rest of the program that day (the Vancouver Aquarium) and time lost taking a walk in the wrong direction earlier in the morning because somebody couldn’t read a map (*cough* the Engineer can no longer be relied upon if he doesn’t have Google Maps turned on *cough*). The Vancouver Aquarium, though expensive, is not to be missed. Plan for at least half a day there, as there are so many things and animals to see! I think my favorite was Helen, the Pacific white-sided dolphin (her pectoral fins were maimed in a fishing net, so she cannot be released in the wild), not to mention the otters and sea lions. There are exhibits about local flora and fauna as well as more exotic wildlife. 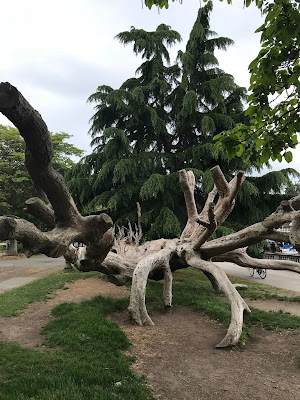 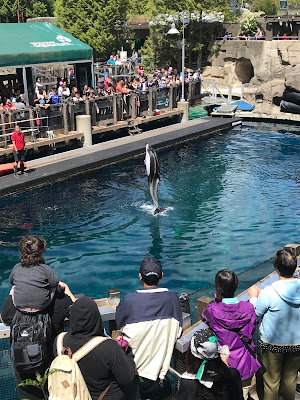 We did not hit all the trendy restaurants, but we got fantastic dim sum takeout from Hon’s Wun Tun House as well as stellar tandoori chicken from Indian Bombay Bistro.

After the initial few days in and around Vancouver, we were off to the ship. I won’t give you a detailed review of the cruise, but Anita Chu from Dessert First wrote good reviews of her Disney cruise that hit the same cities (here are parts 1, 2, and 3). We chose Norwegian, in part because the prices are lower than Disney and in part because there’s no obligation to have dinner at the same seating each night or to dress up on given nights, so this gave us more flexibility with small kids. (For a family-friendly cruise line cheat-sheet, click here.) 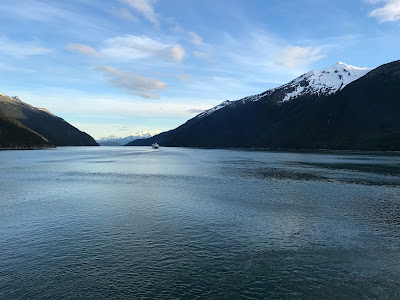 We were on board the Norwegian Jewel, a ship with roughly 2,400 passengers and 1,000 crew members. There was complimentary child care, but the Little Prince only went once (because he came back in a bad mood and said that he hadn’t liked it, so even though he refused to elaborate, we didn’t make him go again). There was also a place to play with babies (not a drop-off option, but that wasn’t what we wanted anyway). The Little Prince spent much of his on-board time asking us to take him to the kids’ pool and hot tub or to the video arcade. I made use of the spa once, when I got what was possibly the best massage of my life (ask for Rebecca).

A quick word about food restrictions on Norwegian… They say that they can feed you gluten-free, but there are caveats. The buffet only has a few options at any given time. You can eat gluten-free in the restaurants only if you order 24 hours in advance, and even then, the staff isn’t always knowledgeable – they brought out a French onion soup, complete with bread on top, to the person with coeliac disease at our table, and this was after a clear discussion with her about her restrictions when we sat down to eat. As for lactose, there are no signs at the buffet indicating whether anything has dairy in it (only whether it’s gluten-free or vegetarian). When I asked whether a specific dessert had lactose, the staff didn’t know and had to ask the chef, then the chef on deck didn’t know and had to call down to the kitchen, and when no one could give me any answer yet 20 minutes later, I walked away with Jell-O and a marshmallow on a stick. Also, in one of the à-la-carte restaurants, I was not told about lactose even when I mentioned my intolerance. I mean, normally I can navigate this myself, but the menu had some inaccuracies in it – beyond the grammatical mistakes, there was a dessert described as a flourless chocolate cake, which I’m usually fine with – but when it was in front of me, I realized that it was more like a cross between a génoise and a napoléon, meaning layers of very flat cake and chocolate mousse. Not only was it full of lactose, it also had flour, even though it wasn’t a “traditional” cake! So yeah, bring Lactaid (for the record, I gave the staff feedback on this matter, but I doubt Norwegian will change its policies based on my opinion alone).

So we had three stops: Juneau, Skagway, and Ketchikan, in addition to three days at sea with a glacier viewing on one of those days. In Juneau, we saw many eagles, including bald eagles, dive for fish in the wake of the ship as we were docking. On later days, some of us saw a whale, others saw sea lions, but since we were early in the season, wildlife sightings were limited. We also didn’t go on many excursions, since most of them were not small-child-friendly, but we still had a wonderful time. The second day at sea was rough, but other than that, we had beautiful weather! Sunshine every day (even in Ketchikan), and while we did use our windbreakers on occasion, we never needed our hats. 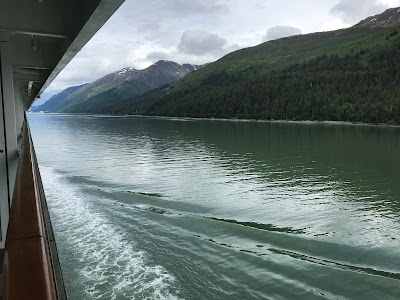 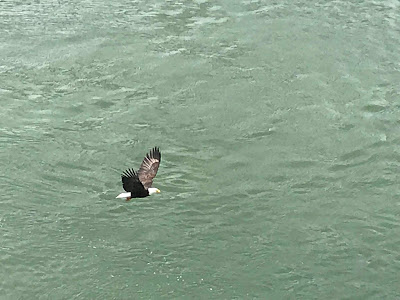 The first stop was Juneau. Wikipedia tells me that it is the only state capital that is not accessible by road – one must arrive either by air or sea. The town itself looked nice, and I wish we’d had more time to explore a bit, but we booked a tour to see Mendenhall Glacier. The bus driver did give us the highlights of town, and he pointed out the governor’s mansion (I can confirm that one cannot see Russia from that house). The glacier itself was magnificent, and I’m really glad we went. That being said, because it was so early in the season, we didn’t book a package tour that would also have taken us to the salmon hatchery (too early for salmon), so we had a lot of time on our hands at the glacier. We could have hiked to Nugget Falls if we had planned things better (2 miles on gravel), but we ended up spending much of our time by the lake, letting the Little Prince throw rocks in the water, and hiking the Photo Point trail (0.3 miles, paved). We also looked around the visitor center during a (brief, light) shower. The big downer for me was learning that a few days prior to our visit, someone had let their dog off-leash in a restricted area and the dog had destroyed the eggs of all 18 nesting pairs of terns, who had flown all the way there specifically to reproduce. 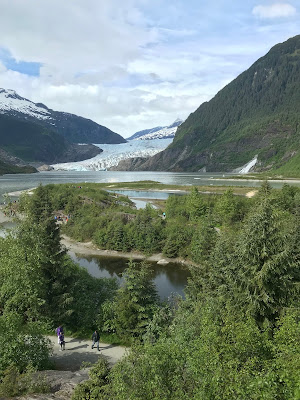 In Skagway, there are lots of tours being offered, but wildlife sightings tend to be less impressive this early in the season, and a train ride to Yukon seemed less appealing when we factored in both kids. So we spent our time exploring the center of town, which was lovely – it’s a gold rush town that still has old-timey buildings and wood sidewalks. There is also a vintage ad on a cliff wall. The population there is about 700 in the winter and 2.500 in the summer with seasonal workers, but there are about 1.3 million visitors a year! It didn’t seem crowded that day, though, possibly another benefit of an early-season cruise. Milk is a whopping $6.59 a gallon and gas is $3.60 a gallon, which I suppose is comparable to Canadian prices but seems exorbitant when you live in Texas (I got this info in the Skaguay Alaskan, a free local paper). I think Skagway was my favorite town! I especially liked The Loom, which had a lot of local items (the only reason I didn’t buy a throw pillow is because I know my kids would destroy it) and Aurora Yarns, where I got two skeins of locally dyed yarn and some stitch markers. We also visited the Skagway Museum, which I highly recommend to learn more about the history of the place (it also serves as City Hall and was once a school). It’s adjacent to Mollie Walsh Park (see here for more about her, and here for a laugh), so the Little Prince got to play outside too. We had lunch at the Sweet Tooth Café, which had good food and great service, though surprisingly few sweet options. 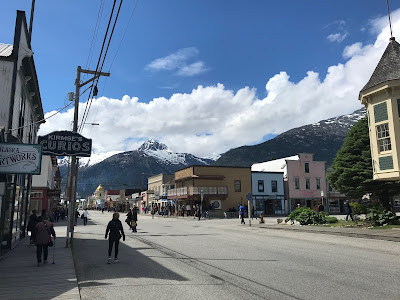 Following this was the second day at sea, during which we were supposed to see Sawyer Glacier, but we ended up seeing Dawes Glacier instead. It was beautiful, and since I hadn’t had my heart set on a specific glacier, this was fine by me, but that change could have disappointed someone else. 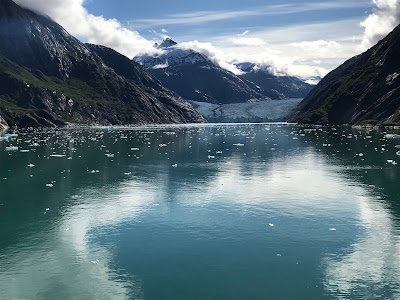 Ketchikan is the southernmost town in Alaska and the Salmon Capital of the world, mostly known for its fishing and canning industries; it’s in the Tongass Rainforest, the second largest rainforest in the world (after the Amazon). They get an average of 12.5 feet of precipitation each year, and even though snow-capped mountains are visible from town, I think the climate is much milder than what we typically think of for Alaska. In Ketchikan, we went to see the Great Alaskan Lumberjack Show, which we thoroughly enjoyed (I strongly recommend buying tickets directly from the venue instead of using the cruise line, as the latter charges a big markup and the venue is easily accessible on foot from the ship anyway). We had lunch at Dwyer’s Crab and Fish Company Restaurant and walked around town for a while after that. I bought chocolate as a souvenir; it’s dark chocolate sea salt by Alaska Candy Company, based in Anchorage. It’s vegan, though it may contain milk and soy, and is peanut-free. I really liked it, but as I look at the package now, I realize that it was actually made… in Canada. Oh well. It was a wonderful trip anyway! 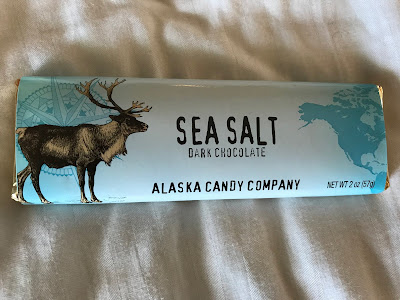 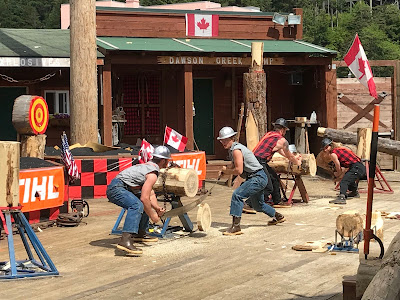 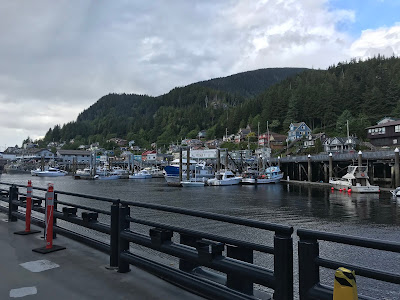