Somehow I’m now busier in the summer than during the rest of the year. Probably because the Little Prince doesn’t have daycare three days a week anymore… Plus, admittedly, I don’t have a comfortable desk in the summer, so I’m less prone to sitting down at the computer. I did want to post this recipe, though – it came in very handy when I was trying to unload some frozen cherries and cranberries. It would be a good dessert for the holidays, too! I changed a few things to make prep easier. I also noticed that it took all afternoon for the chocolate layer to harden, so I recommend making this cake the day before; to make it easier to slice, move it from the freezer to the fridge a few hours before serving it (but don’t store it there, or the chocolate layer might melt too much).

For the coconut milk in the chocolate layer in the cheesecake, it gets a bit tricky: there’s a product called So Delicious Culinary Coconut Milk (which I’m not linking to because it was actually so hard to find that I had to get it online and I’m wondering if it might be discontinued). It’s sold in carton packaging (as opposed to a metal can) and is actually thicker than canned coconut milk. If you fond some, you can use it directly at room temperature for this recipe and I find that easier; otherwise, you have to refrigerate cans of coconut milk overnight and skim the creamy layer at the top (use the coconut water for smoothies or something).

For the chocolate layer of the cheesecake
In a high-powered blender like a Vitamix, blend coconut milk (2 cups of the thick cream part from chilled canned coconut milk if not using the So Delicious Culinary Coconut Milk), maple syrup, and cacao powder until smooth. Add melted chocolate chips and blend until chocolate is incorporated and smooth. Pour on top of the prepared crust. Tap the pan a couple of times gently to remove any bubbles. Place in the freezer on a level surface. (Since this will need some time to chill before you can make the cashew layer, you can either stop here for now or go ahead and make the cranberry cherry topping.) Rinse the blender thoroughly but don’t bother washing it just yet.

For the cashew layer of the cheesecake
Place cashews with the maple syrup and lemon juice into your Vitamix and blend until it starts to get creamy. Add in coconut milk and vanilla blend until smooth and creamy, scraping the sides as needed. Remove pan from the freezer, making sure the top of the chocolate layer is set, and pour/spread your filling into the pan on top of the chocolate layer. Gently shake the pan side to side to even out and carefully tap the pan on the counter to get out any possible air bubbles. Place in the freezer on a flat level surface.

For the cranberry cherry topping
Combine the sugar, cornstarch, and salt in a large sauce pan. Whisk in water and lemon juice. Add cherries and cranberries. Cover and bring to a boil, stirring frequently. Once the mixture comes to a boil, continue cooking for 2 minutes while stirring constantly to prevent burning. (If all of your cranberries start popping, reduce the heat.) Remove from heat and let cool. Place mixture in a jar in the fridge to cool completely and until ready to serve. You can make the topping up to 2 days ahead of time.

Freeze for 2 hours or until ready to enjoy. If storing in the freezer longer, remove 35-45 minutes before serving, or an hour or two ahead if you want to put it in the fridge. Cut cake and serve with cranberry cherry topping. Enjoy! 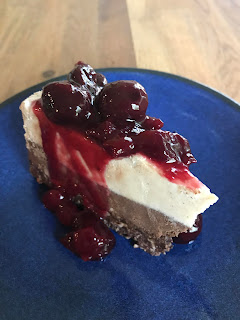 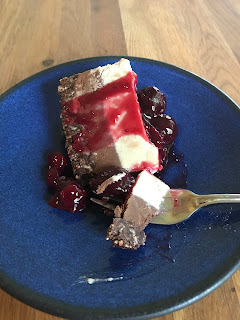 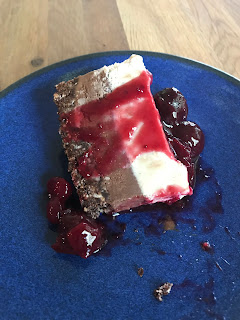