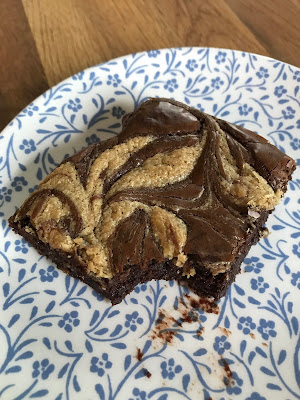 I wanted to use up a jar of tahini, so I made these tahini brownies from Bon Appétit (they were adapted from a recipe by David Lebovitz that I had tried once before). As it turns out, I might have to make these on a more regular basis! We all really enjoyed them. Note that these are definitely fudgy brownies, not cakey at all, but for once I didn’t mind!

Also, I didn’t have agave nectar, so I used corn syrup, but it was too thick and I had to water it down a bit. I’d recommend maple syrup as a substitute here. (The only reason I’m talking substitutes is because I just don’t have it in me to keep ALL the sweeteners on hand; I’m from Quebec, so maple syrup is one thing about which I do not compromise.) As is, the recipe is gluten-free and dairy-free, if that’s helpful at all.

Preheat oven to 350 °F. Line an 8” square baking dish with 2 overlapping pieces of parchment paper, leaving at least a 3” overhang on two sides.

Whisk cornstarch and cocoa powder in a medium bowl until no lumps remain. Set aside.

Heat chocolate, coconut oil, and 1Tbsp. tahini in a small saucepan over low heat (I used a double boiler), stirring, until melted and smooth.

Using an electric mixer on medium-high speed, beat eggs, granulated sugar, and brown sugar in a large bowl until light, smooth, and doubled in volume, about 3 or 4 minutes. Beat in salt and vanilla to combine, then beat in chocolate mixture, scraping down sides as needed, until incorporated. Beat in cornstarch mixture, then increase speed to medium-high and beat until mixture is thick and holds its shape, about 30 seconds.

Scrape batter into prepared baking dish and smooth top. Dollop agave mixture over and swirl into top of batter with a skewer or toothpick.

Bake brownies until sides are puffed, top is browned, and a tester inserted into the center comes out with a few moist crumbs attached, 22 to 26 minutes. Let cool before removing from pan and cutting into squares. 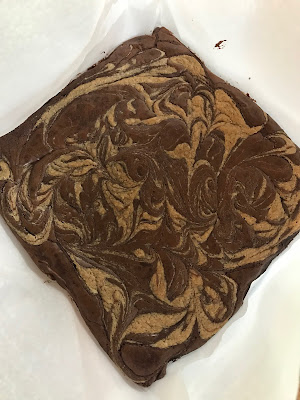 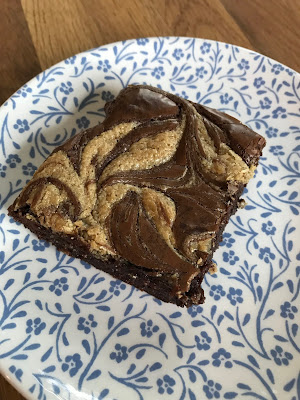 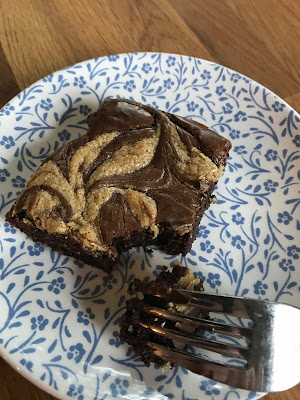 I'm intrigued! I made the tahini chocolate chip cookie recipe that was floating around last year, and it was really good -- the tahini made the cookies especially rich, and I'm sure that it does the same here.