At some point last fall, I made Trish de Seine’s famous chocolate cake and found it quite lackluster. This got me thinking about how often I make a chocolate cake hoping for something really good, better than my go-to recipe, only to be disappointed. So I decided to test a bunch of recipes that had billed themselves as “the best” and see which one I would keep, once and for all. I don’t want to waste time (and calorie allotments) on mediocre cakes, after all. I wanted the best chocolate layer cake (NOT a bundt cake or a loaf cake or chocolate-avocado or gluten-free or whatever, just the best layer cake). So I looked at all the recipes I had bookmarked, online and in cookbooks and magazines, and tried to find points in common (example: two recipes called for yogurt, so I compared those two among themselves, in the first bracket if you will, before comparing the best of those to the rest). For each cake, I served it to my family once, froze a clearly labeled piece for later comparison, and the rest of the cake was either doled out over a few days OR was sent to work with the Engineer, who came back with an empty carrier each time. And here’s what happened. (If you just want the result, scroll to the bottom of the post.)


I made them all with the same ingredients (same white whole wheat flour in every one, same chocolate, same cocoa, same instant coffee, same vegan margarine, same coconut milk instead of cream, etc.). I didn’t use baking strips or heating cores in any of them, because I forgot for the first one and really wanted to compare everything as fairly as possible.

I had meant to make the winning cake one more time and take good pictures (as the photos I took otherwise were more for documenting and my personal reference), but you know what? Even though this project stretched out over several months, I just don’t have it in me to bake another chocolate cake right now. So these few low-quality photos will have to do.

Also, I intended to make the famous Beatty’s Chocolate Cake by Ina Garten, but realized it was almost identical to Ricardo’s best chocolate cake, so those two are equivalent in my mind (I simply tried Ina Garten’s frosting on another cake that didn’t come with a frosting recipe to evaluate that part).

Small Victories cake: there was only enough frosting for the top, and ideally it should not be refrigerated. I found the crumb quite good, but overall I already knew it wasn’t the best. The Engineer did not care for the raspberry jam between the layers or for the frosting, but the Little Prince loved the frosting. 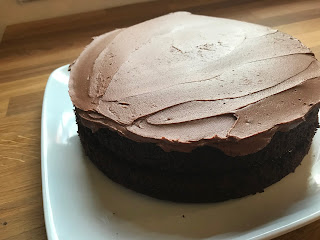 Famille futée cake: I made a half-recipe, because 2 layers were plenty for my purposes. I was curious about their recommended “healthy” frosting made with tofu, though it’s still got as much sugar as regular frosting (I guess it’s just low in fat? which doesn’t automatically make it healthy?), but that was a total failure – it was hard to work with, runny, and the cornstarch gives it an unpleasant mouthfeel. That being said, the cake itself was excellent, and better than the Small Victories cake that also called for yogurt! This one had mineral water as well. 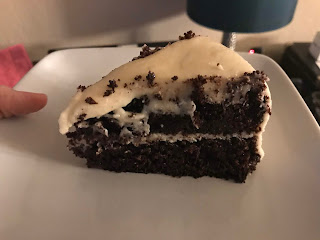 Patrice Demers’s cake: The Engineer called it a “very satisfying cake”, but I knew it was not The One. The crumb is not the best, and it contains chopped chocolate that I think I find a bit off-putting in a layer cake. 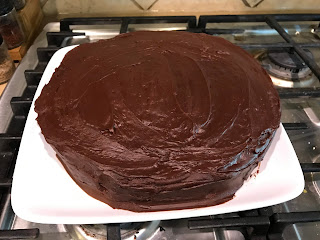 Ricardo’s cake: This was definitely better than Patrice Demers’s for me – we had a contender! I didn’t have two 8’ springform pans, so I used 8”-round pans lined with paper, greased, and dusted with cocoa. It was essentially the same as Ina Garten’s cake (which I didn’t bother baking), and had less cocoa than the Black Magic Cake. The ganache was just okay, though. 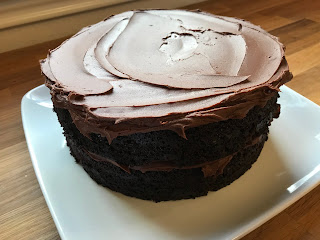 Black Magic Cake: This recipe really should have specified to line the pans with paper in addition to greasing them! The cake was flat, flimsy, and fell apart. Ricardo’s cake beats it hands down.
Ina Garten’s frosting: I used it to top the Black Magic Cake. I found that the yield was too small, the frosting hardens immediately, it had a bit too much coffee in it, and it was weird. Somehow, though, it ended up being the Little Prince’s favorite cake/frosting combo up to that point. 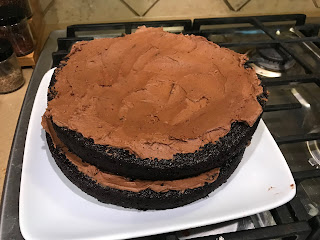 Not Without Salt cake: I used 1 cup of white sugar and 1 cup of brown sugar. I would have loved to be told the weight of the batter I should have put into each of the 3 pans… As it was, upon unmolding, 1 layer fell apart, so it was a 2-layer cake instead of a 3-layer cake. I would use 2 pans, myself. I liked it better than the previous cake, but the Engineer and the Little Prince both liked it less. (As for the Fox, he wasn’t giving me any quotes to use, but he seemed to be happy with all the cakes in the running.) 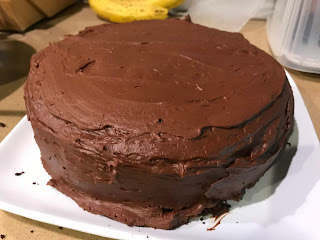 Salt Fat Acid Heat cake: We have a contender! This cake has a great crumb – which can withstand some handling – and is delicious. (I had made it once before, for Valentine’s Day, and loved it. It’s worked well in both 8”-square and 8”-round pans.) The instructions say to line the pans with paper, grease them, AND dust them with cocoa. Honestly, that’s probably overkill and you could pick two of those three instructions, but I figured “better safe than sorry”.
Vitamix fudge frosting: I was curious about this because I’d never made a frosting in a blender and because it called for evaporated milk, which Carnation now makes lactose-free. In the end, though, it was just okay. 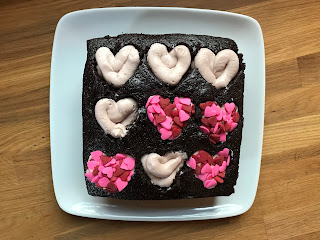 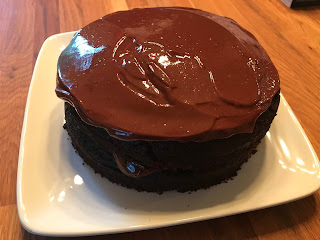 Minimalist Baker cake: I baked it a bit longer than called for because this time, I made it in 8”-round pans instead of 9”-round. This cake seemed to come out ahead of the pack! It definitely has the best frosting of the bunch, and the crumb is wonderfully moist. The Little Prince revised his favorite to this one upon tasting it. And I felt a bit like Dorothy when she found out that she’d had the power to go home all along – when I posted that recipe almost 4 years ago, I had called it “the definitive chocolate cake”, and I should have just listened to Past-Me. 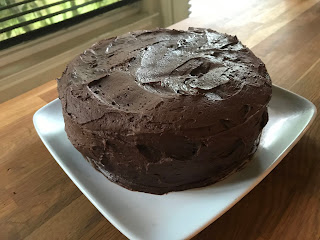 After testing the frozen samples: My favorite is still the Minimalist Baker cake, but I think I will make the Salt Fat Acid Heat cake again too. Ricardo’s cake would be a close third. For the Engineer, Patrice Demers’s cake is the best of the bunch, so I guess I’ll make the recipe available to him for when he wants to make it. The Little Prince likes the Minimalist Baker cake best, but the Black Magic with Ina Garten frosting is a close second. The Fox likes chocolate.