This post meanders quite a bit – if you just want to know how to make hard-boiled eggs ASAP, scroll all the way down and read the instructions in bold.

I’ve been trying to nail down an Easter menu so that I don’t have to scramble each year, but it’s not going so well. I tried vegan Cadbury eggs bowls, which were essentially white chocolate mousse served in chocolate bowls and topped with a round of canned peach. The recipe only gave loose directions for making the chocolate bowls, using balloons to shape them, and mine turned out all wrong. Next time (I do think there will be a next time, because I really like the concept), I’ll use tempered chocolate, and at the very least 2 ounces per small bowl (even though that means there will be leftover chocolate). Bakerella has a post about this that I’ll look at. And the white chocolate mousse was fine, but not great. 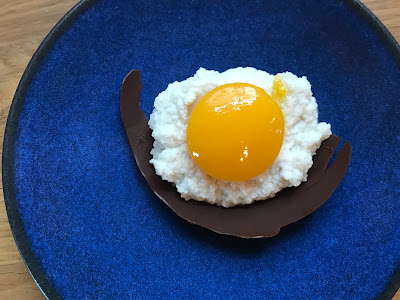 Two years ago I had made a sweet carrot soufflé (which I had first made in college), but I was the only one who liked it. And the Engineer didn’t like the raspberry morning buns from Small Victories. This year I decided to make deviled eggs, which he loves – I wanted to make the bacon and chive deviled eggs from Cook’s Illustrated, so I used their recommended method for making easy-peel, hard-cooked eggs (because my method of baking them in the oven sometimes leaves brown marks, which don’t matter for a chopped egg salad for instance, but would show on deviled eggs). I followed the instructions, which called for a steamer basket, a timer, and an ice bath, but even so, it was a complete disaster. The shells took off large amounts of the whites with them, and the yolks were undercooked. I ended up serving the eggs halved, topped with crumbled bacon and chopped chives. 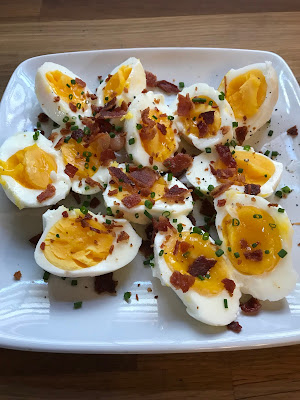 Since then, I’ve tried Smitten Kitchen’s directions and was much happier with those in my quinoa kale salad with carrot-coriander dressing. 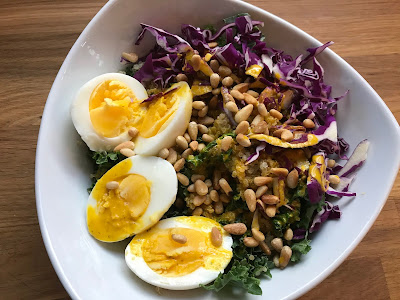 I took it a step further and added baking soda to the water, which made a big difference in how easy they were to peel. (That link also recommends using a white kitchen towel in the pot to prevent eggshells from cracking, especially if you are making many eggs at a time. I recommend these flour sack towels that I’ve been using as napkins and even as cheesecloth.) So from now on, to make hard-boiled eggs, I’m adding a dash of baking soda to the water and boiling them at least 10 minutes (10 for eggs as pictured below, but I’d do 11 or 12 minutes for deviled eggs next time) and soaking them in an ice bath to stop cooking. 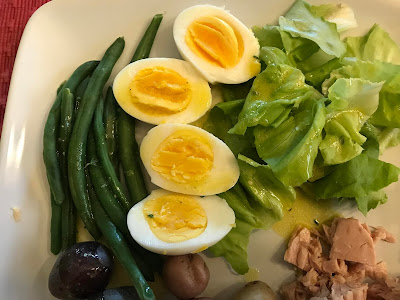