I was at a loss for what to make for dinner, and the Engineer suggested baked potatoes. It was a good idea, because it seemed like it had been a long time since I had bought baking potatoes (I made these baked garlic parmesan potato wedges in December and can’t clearly remember buying them since). So after looking through my recipes, I decided to make baked potato egg boats, even though it was presented as a brunch recipe.

I had to bake the potatoes for a much longer time than called for, but the result was so worth it! I also used more cheese than called for, and the amounts below are mine. This was delicious and so satisfying! I served it with leftover rainbow salad.

Keep in mind that you can bake the potatoes in advance and finish the prep closer to meal time. Also, you don’t actually use the flesh of the potatoes in this recipe, so you can snack on it as you’re waiting for the egg boats to bake or you can reserve it for another use.

Place potatoes directly on oven rack in center of the oven (I used a baking sheet) and bake for 40 to 45 minutes or until potatoes are tender through the center (it took longer in my case).

Remove from oven and allow potatoes to cool for about 15 minutes.

Slice each potato in half lengthwise and hollow each half out, scooping the potato flesh into a mixing bowl for another use at another time.

Sprinkle a small amount of bacon and cheddar into each hollowed potato skin and transfer skins to a baking sheet lined with parchment.

Whisk milk, remaining bacon, half of the remaining cheese and green onion into the egg mixture and season with salt and pepper.

Pour egg mixture into each potato cavity (¾ full) and top with remaining cheese.

Lower oven temperature to 375 ˚F and bake potatoes until the egg mixture has set, 15 to 20 minutes.

Remove from oven, cool a bit, and serve. 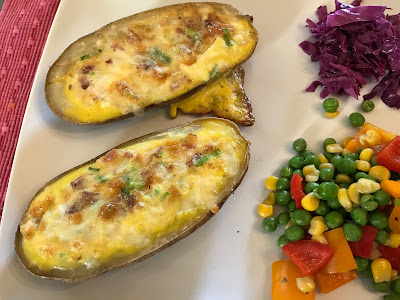 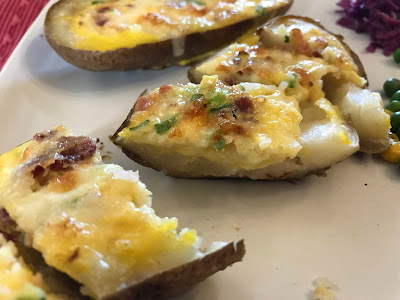