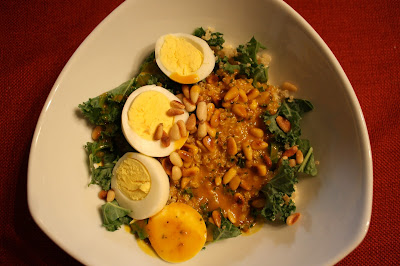 People, you have got to try this salad from Gluten-Free Girl. Or at the very least, this dressing. It is beyond awesome! It’s bright, both in taste and color, and is guaranteed to jazz up your meal. I juiced all the carrots that were languishing in my crisper drawer, but if you don’t have a juicer, it would be fine to buy carrot juice at the store (I might even do that next time). My juice separated a little bit, because I have a centrifugal juicer, but then once I used my immersion blender to whiz all the ingredients, it all came together beautifully, and the consistency was wonderful. The whole dish is a bit long to make, because of the different steps going on (hard-boil eggs, roast pine nuts, cook quinoa, make dressing), but it’s well worth it. The Engineer asked how it was made, and I described the process of the dressing to him, after which he exclaimed, “The effect is dynamite!”

Of course, you’re free to change the salad as you see fit; you can omit the nuts or use something other than pine nuts, and omit the eggs for a vegan version. I used 1 cup of uncooked quinoa, which gave me 4 small servings – plus an egg and a handful of chopped kale per person. Leftover dressing goes well with any salad, though, and I had it with chickpeas and avocados later that week. You’ll get a little more than a cup; I kept mine in a Bonne Maman jar in the fridge, and it didn’t separate.

Set a small pot on medium heat. Add the coriander seeds. Toast the seeds, tossing them around in the pot frequently, until the smell of the coriander releases itself, about 5 minutes.

Pour the liquid in the pot into a blender (I used the container that came with my immersion blender). Blend on medium speed. Slowly, drizzle in the olive oil until the oil is fully incorporated into the dressing, about 2 minutes. Add the cilantro and blend until it’s mixed into the dressing. Season with salt and pepper to taste. 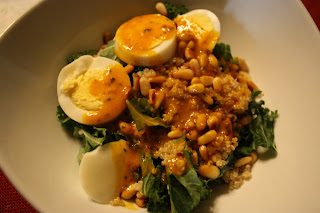