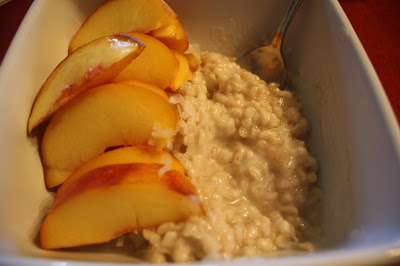 While spring has definitely sprung in South Texas, some of you are still buried in snow. How about a nice, warm, whole grain breakfast? This recipe is adapted from The Sprouted Kitchen; the original called for pomegranate molasses and arils, but even though I did have the molasses, I decided to go another direction and use peaches – which, it turns out, were fabulous. I think this would be good with berries, or with apples or pears, too. As a sweetener, the first morning, I used coconut syrup, but after that I used maple syrup. I loved it! It’s a nice change from oatmeal and kasha when you want something warm in the morning (not that I have kasha often anyway).

Rinse the barley in a mesh strainer. Put the barley and water in a small saucepan and bring to a simmer over medium heat. When the water is almost absorbed, after about 8 minutes, stir in ½ cup of the coconut milk and the cardamom. Keep the heat at a gentle simmer and stir occasionally, as if you were cooking risotto. Continue to add the coconut milk, about ½ cup at a time, until the barley is cooked through but still al dente. If necessary, add a bit more water and continue simmering until it reaches the desired doneness. Stir in the salt. Divide the barley among 4 bowls (or just spoon out one serving and refrigerate the rest) and top with the toasted coconut, syrup and fruit. 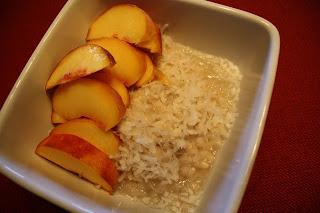 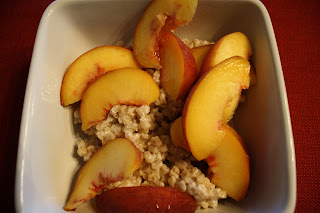