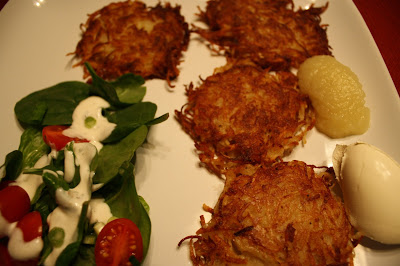 I’d been eyeing this Bon Appétit latke recipe, which claims that the secret to good latkes is schmaltz (i.e., chicken fat). When I was at Whole Foods not too long ago, though, I thought, “You know what’s better than schmaltz? Duck fat!” So I bought a little container of duck fat and made these latkes with it. They were AWESOME. These definitely belong to the shredded-potatoes-held-together-with-batter camp (as opposed to the batter-with-potato camp), and the crispy edges and taste were wonderful! The Engineer said they were the most latke-y latkes I’d ever made, and that they reminded him of his bubbie’s. If you’re eating these as a main course, make your mom happy and have some greens with them (such as a salad of spinach, tomatoes and green onions with a yogurt ranch dressing). I served them with applesauce and lactose-free sour cream; the Engineer also likes his Hungarian style – with sugar on top. If you keep kosher, then try vegan sour cream instead of regular dairy sour cream. You could also use matzo meal at Passover (and omit the baking powder, which I’m not convinced is necessary), or perhaps use gluten-free bread-crumbs for a gluten-free version.

Preheat oven to 325 °F. Peel potatoes. Using the large holes of a box grater or the grater disk on a food processor, grate potatoes and onions. Transfer to a large kitchen towel. Gather ends of towel; twist over sink and squeeze firmly to wring out as much liquid as possible. Open towel; toss mixture to loosen. Gather towel; wring out once more.

Whisk eggs, breadcrumbs, salt, baking powder, and pepper in a medium bowl to blend. Add potato mixture. Using your fingers, mix until well coated. (Latke mixture should be wet and thick, not soupy.)

Line a large rimmed baking sheet with several layers of paper towels. Set a wire rack inside another large rimmed baking sheet; set aside. Heat 2 Tbsp. schmaltz, if using, and 2 Tbsp. oil (or 4 Tbsp. oil if not using schmaltz; fat should measure about 1/8 inches deep) in a 12-inch nonstick skillet over medium-high heat. Drop a small amount of latke mixture into pan. If the fat sizzles around the edges, it's ready. (Do not let fat smoke.)

Working in batches and adding more schmaltz and oil to skillet as needed to maintain 1/8 inches fat, drop large spoonfuls of mixture into pan, pressing gently with the back of a spoon or spatula to flatten slightly. (If mixture becomes watery between batches, mix to incorporate; do not drain.)

Cook latkes, occasionally rotating pan for even browning, until golden brown and cooked through, 2 ½ to 3 minutes per side. (If small pieces of potato floating in the oil start to burn, carefully strain out.)

Transfer latkes to paper towel-lined baking sheet to drain, then transfer to prepared wire rack. Place sheet with latkes in oven to keep warm and crisp while cooking remaining latkes. (If you’re a little lazy, like I am, set your oven to 200 °F instead and place your latkes directly on a baking sheet lined with paper towels.) 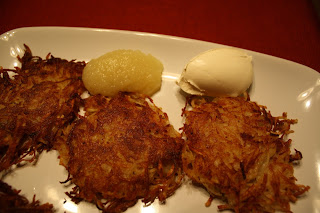 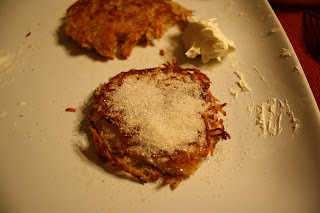 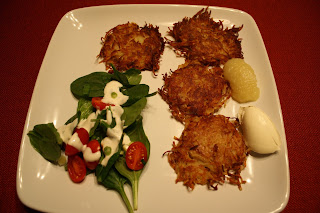