I used to be pretty much satisfied with the knit patterns I had for baby tops. There were a few that I made often, then I got a pattern book and made more, but I had a certain set from which I deviated very little. And that was fine. But then, there came Pinterest. I saw pin after pin of absolutely adorable baby clothes, most of which went on my to-do list. And now, the time is finally right to knit up a storm!

Knitting patterns for babies can be a little tricky, because most “boy” patterns are often unisex, really (as long as you don’t mind which side the buttons are on), but the “girl” items, either because of style or color, are really just for girls. The Engineer and I do not know the sex of the baby, but I didn’t want to deprive myself of knitting those fantastic girl patterns, so I dug through my stash of yarn and used the “girly” yarn to make them (I still have a few more in the queue). There’s basically a 25% to 50% chance the girl tops will not see any use, but at worse, I’m sure they could be passed on to someone else eventually. The “boy” patterns, though, are unisex, so as long as I sized them correctly, they’ll see some use! I’m leaving the pictures small, but as always, you can click on any of them for a larger view.

The first pattern I’m presenting is actually one that I knit before I was pregnant, for somebody else’s daughter. I made it for the baby now known as June Pettit, Molly Wizenberg’s daughter (I’m a big fan of Molly Wizenberg, mostly for her blog). The pattern is a pebble yoke cardigan on Ravelry (sold for $6.50). I had already made one with leftover yarn from this projectand I knew I really liked the look. The yarn I used for June is Koigu Painter’s Pallet Premium Merino in color P216. The skeins weigh 50 grams, and for the 3-month size, I needed one and a half skeins. The buttons are ceramic; I found them on Etsy. I love how it turned out! 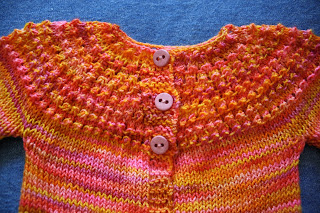 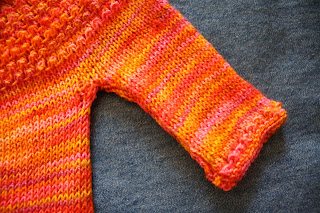 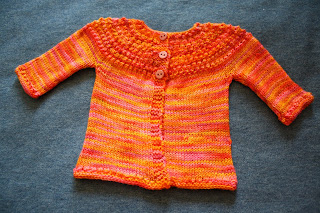 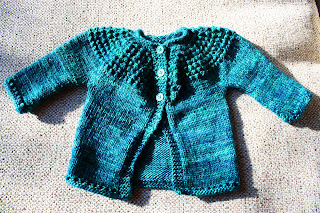 Then, with leftover Koigu yarn, I made an A-line jacket unusual in that it’s knit from side to side, vertically, so it’s a good pattern to show off a variegated yarn! The pattern, by Drops, is free on Ravelry; I had seen it on Posie Gets Cozy. It had me confused at first, because I was knitting it in stockinette stitch, and the wrapped stitches were really obvious. I started over with a different method, and while I got better results, I still wasn’t happy. Only then did I realize that I was supposed to be knitting in garter stitch (which does help the look of the jacket), and that the wrapped stitches do stay visible! Because the yarn is so lightweight, it took forever to knit, too. I used up about 4 skeins for this, plus 3 buttons from my stash. 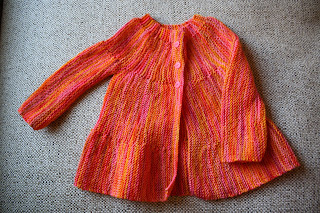 I also used up some leftover green yarn from this cardigan to make the pattern Mini Chic, also sold on Ravelry. I made the short sleeve version, but the long-sleeved one is equally cute! The pattern was easy, too. The buttons are ceramic and I got them on Etsy. (You’re going to be reading this a lot, because I got 20 ceramic buttons – 10 pink and 10 cream – that I’ve been using for these projects. Plus, the vast majority of patterns I used in this post are from Ravelry, which gets a lot of pins, what can I say!) 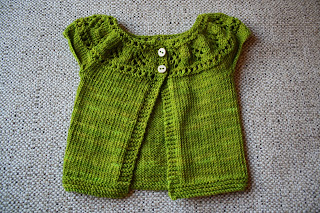 With yarn leftover from this other cardigan, I made this adorable Little Pearl Vest (pattern is $5.00 on He Sows, She Sews). The button is from my stash. You’ll notice that I always take picture before blocking garments, basically because I know I’ll end up washing them with baby detergent in a few months anyway, so I figure I’ll just block/shape them at that point. This was another easy pattern, and the bodice is totally customizable with just about any pattern you can think of. It could be worn over a long-sleeved onesie, too. 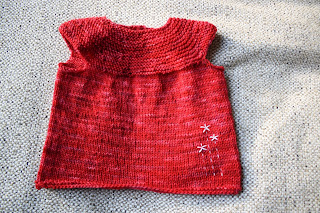 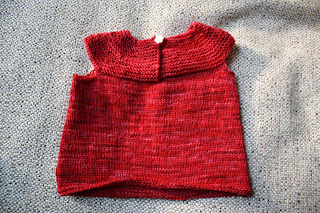 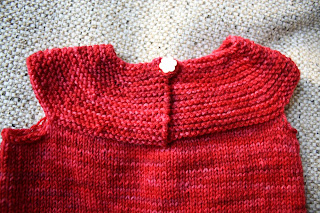 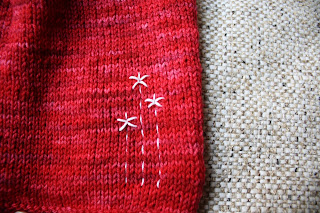 I also made a ribbed baby jacket with wide lapels (pattern available for free on Ravelry). The pattern itself is unisex, and there is a lot of variation for the number of buttons and their placement, but I had some Crystal Palace Merino 5 in Bossa Nova on hand, so I made it for a girl, with buttons from my stash but originally from Etsy. This is the 6-month size, and it used up 3 skeins. I have a 4th one left, so I might make some matching booties with it (because I have plenty of hats already). 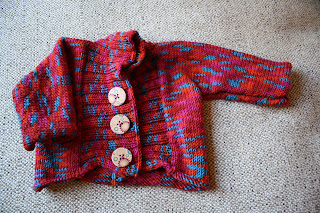 I saw this gorgeous shirt on Posie Gets Cozy; the pattern, Springtime in Hollis, is $5.00 on Ravelry. For the yarn, I used two strands of Tosh Merino Light, by Madeline Tosh, in vermillion. For the 6-month/9-month size, I needed a little more than one skein, but I didn’t make it with a hood. I loved learning the pattern on the bottom of the shirt; it wasn’t hard, but I did have to check after each set of 4 rows, otherwise mistakes were easy to make if I wasn’t paying attention (it should be noted that I knit almost exclusively in front of the television). The buttons are ceramic and I found them on Etsy. 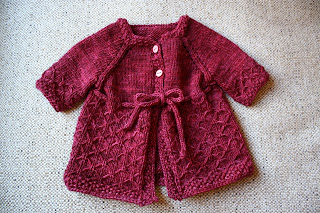 As for the unisex shirts, I started with the Baby Sophisticate, free on Ravelry, because I wanted to use up some Rowan Lima yarn in La Paz colorway. It was a little hard finding a baby pattern for a yarn that thick, though, but once I found it, knitting it was a breeze. If memory serves correctly, it used up 2 skeins exactly. The wood buttons were part of my stash, but were originally from Etsy. 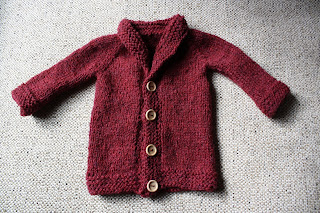 Then, to use up the two other skeins I had, I made a long-sleeved shirt from a free pattern (in French). It’s relatively plain, but it served its purpose well by using up all the rest of the yarn I had in that color. 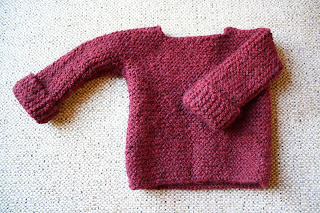 I also fell in love with this Puerperium Cardigan, free on Ravelry. Since it’s made to be worn in the weeks after birth and since I’m due in July, I made this with short sleeves. I was using Cascade 220 Superwash Yarn in Wasabi, and it didn’t even use up a whole skein! I’m going to have to find other patterns in this gauge, because I have 3 whole skeins left on top of this… The buttons are ceramic and were from Etsy. 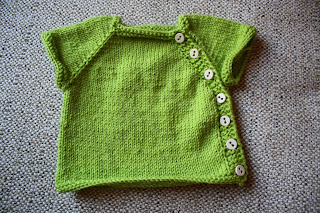 Finally, I made this 3-month size baby vest, free on Ravelry. I made it once for a friend’s baby boy in Debbie Bliss Rialto 4-Ply (color Sky), and then I made it for myself in a bright yellow HiKoo CoBaSi yarn (using up about 1 ½ skeins each time). It was my first time working with the CoBaSi yarn, which is made from cotton, bamboo, silk and nylon. While I like how soft it is and how breathable the finished vest feels, I felt that the three strands of the yarn had a tendency to come apart as I was working with them, which wasn’t always pleasant. I do like the finished product, though! 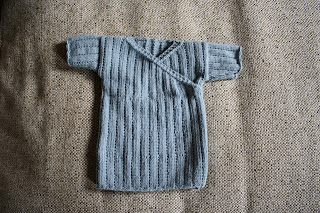 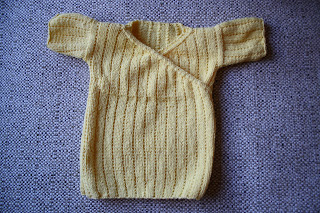 Super cute! That's one lucky baby! FWIW, I never used baby detergent. I switched over all our laundry detergent to Tide free, which we like since Ellie has super-sensitive skin. I also have a bucket of Claudia's Choices that I use for the reusable diapers- it lasts a long time! I stopped using dryer sheets as well since they are not supposed to be good for reusable diapers (and apparently leave enough of a residue in the dryer so you can't just stop using them for those loads).

Oh, good to know! I'm using Mrs. Meyer's as a laundry detergent right now, but I have no idea if that's gentle enough for a baby. I don't use fabric softener anyway. For diapers, I figured I'd just use Rockin' Green, since that seems to be what everyone's talking about... But I haven't researched it yet. Diapers are the next big thing on my list of things to research!

I'm sure if you're using a gentle, natural cleanser, it will be gentle enough for a baby, although I did notice Mrs. Meyer's has a baby version. I would either use whatever you plan on using for the diapers on your baby's clothes or just switch over to one detergent for everyone. No sense having multiple detergents. The people at BumGenius have a list of recommended detergents for cloth diapers (http://www.cottonbabies.com/clothdiaperdetergents.pdf) and I'm sure wherever you get yours from will give you a list as well. Good luck with the research! There are a lot of choices out there.

Unknown said...
This comment has been removed by a blog administrator.
2:30 AM

andrewhudson said...
This comment has been removed by a blog administrator.
12:26 AM